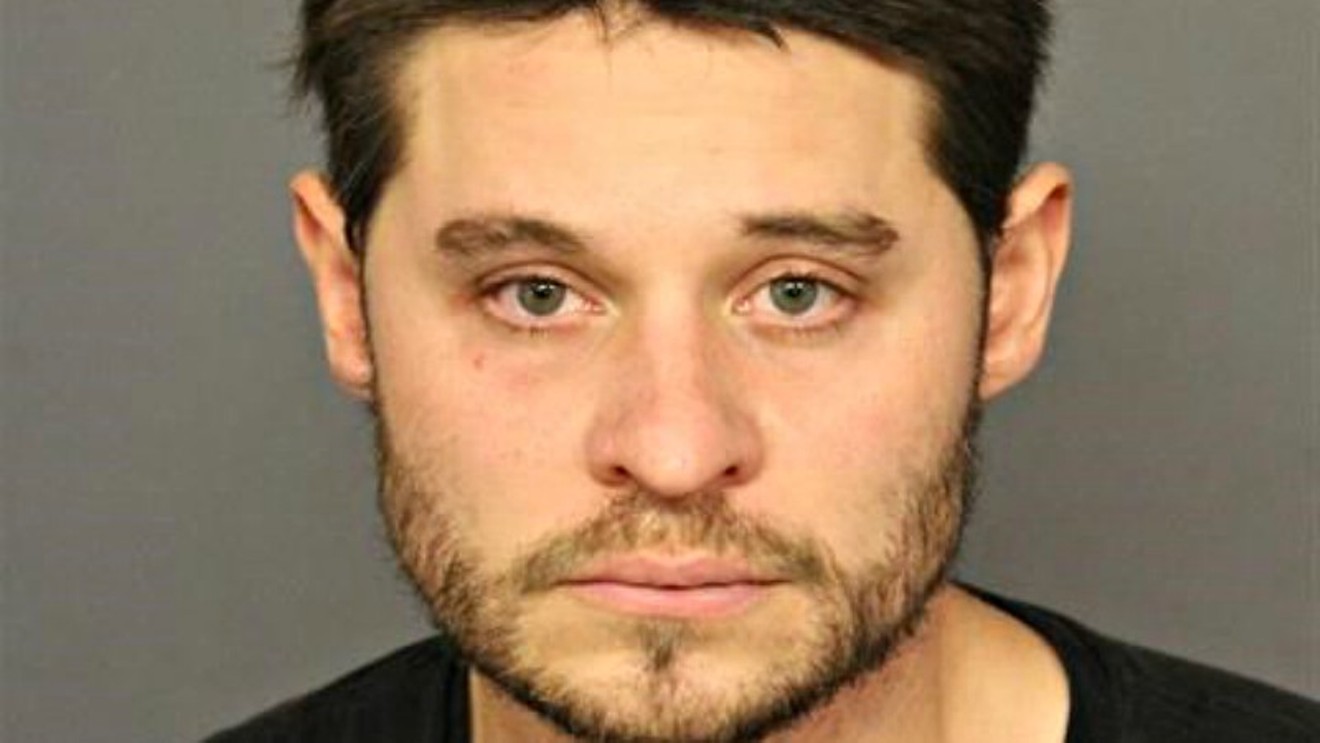 The booking photo of John Affourtit. Denver District Attorney's Office
At 1 p.m. today, January 15, an unusual hearing at Denver's Lindsey-Flanigan Courthouse will pit Denver Human Services against the ex-wife of John Affourtit, who is currently behind bars and awaiting trial on murder charges for allegedly causing the death of his girlfriend's son, a three-year-old named Jeromiah.

According to attorney Jessica Peck, who represents the ex-wife, the mother could lose custody of her three-year-old daughter by Affourtit — in large part because she believes he's innocent.

"It's stunning to me that DHS would file a case against somebody without a single shred of evidence, based on one family member standing up for another family member in advance of trial when the accused is still in jail," Peck says. "It's hard to imagine that is somehow endangerment or failing to protect a child. I've never seen anything like this, ever."

As Peck acknowledges, the controversy revolves around "the tragic death of a child." 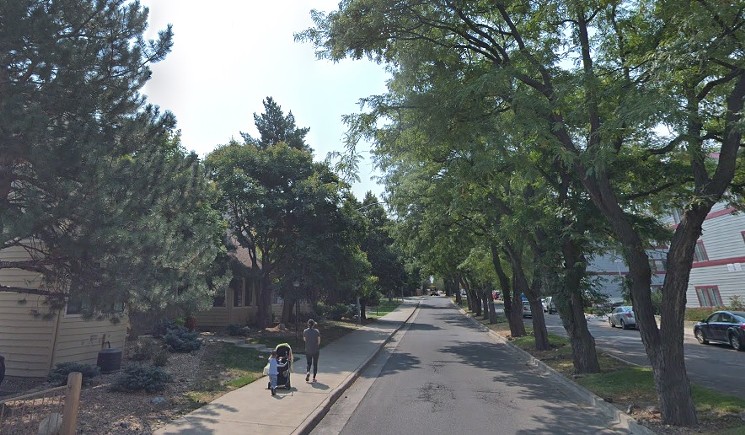 The 900 block of South Dahlia, near where Jeromiah died.
Google Maps
On September 25, 2018, as recounted by the Denver District Attorney's Office, police and medical personnel responded to a report of a child not breathing in an apartment on the 900 block of South Dahlia Street occupied by Affourtit and his girlfriend. Jeromiah could not be revived, and after the Denver Medical Examiner's office determined that his death was the result of physical harm, Affourtit was arrested and charged with two counts of murder in the first degree — for child under twelve/position of trust and child abuse resulting in death.

A subsequently released affidavit revealed that Affourtit, who was unemployed and had been watching Jeromiah while his mother was at work, told authorities that the boy had recently been sick and suffered head injuries after falling into the bathtub. Law enforcement officials didn't think this story adequately explained Jeromiah's wounds, which included a possible shoulder dislocation, and suggested that an infection in his abdomen that was the likely cause of death had also been caused by abuse. Moreover, Affourtit had a previous mark on his record: In 2011, he'd allegedly violated a protection order involving a former girlfriend.

Given all that, why does Affourtit's ex think he's not responsible for Jeromiah's death? Peck says her client has spoken to a number of people in Affourtit's circle who have offered what she calls "alternate explanations" for the boy's condition — and there were no injuries to her daughter, who was at the apartment when Jeromiah's health crisis took place.

Also in Affourtit's corner is his sister, who's launched a GoFundMe page on his behalf. The introduction to "Prove John Affourtit Innocent" reads: "My brother John W. Affourtit is in need of help. He is being charged for something I believe he did not do. My brother is completely incapable of doing what he is being accused of.
My family and I are trying to help him by raising as much money as we can to prove his innocence. John is a kindhearted person and a loving father. Please help me free this innocent man to his awaiting...daughter." 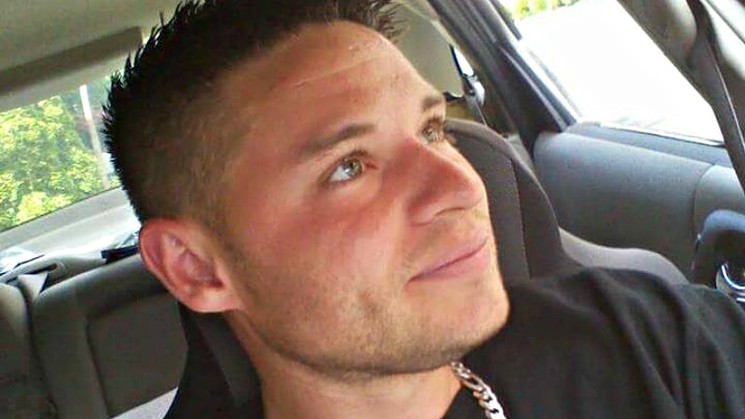 A Facebook photo of John Affourtit.
Facebook
The page has not led to a groundswell of support. Although it's been online for three months, it has yet to generate a single donation.

In the meantime, Peck notes, Denver Human Services has targeted Affourtit's former wife with "a dependency neglect case, where the government can exert its authority and power to take my client's child — and they're threatening to do that. They argue that my client has failed to demonstrate adequate protective capacity, which under statute would allow DHS and Child Protective Services to obtain custody."

Peck maintains that Denver Human Services personnel have told her that this move was prompted by the assertion that the mother put her daughter on the phone with Affourtit after his arrest, in potential violation of a protective order.

The ex denies that, though she acknowledges that the girl may have said "I love you" or something along those lines in the background of a conversation. But Peck doesn't think anyone at DHS heard any such call, which are routinely recorded, and she hasn't, either. 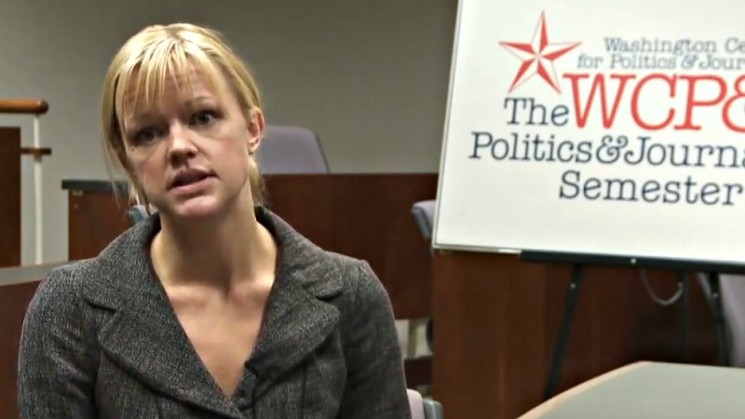 Attorney Jessica Peck.
YouTube
Nonetheless, the DHS caseworker supervisor remains concerned, as is clear from the following email, sent to Peck on January 2. It reads in part:


The Department has a bigger picture concern involving your client. Not only do we have the worries that were presented at court during the last hearing for John around your client putting her child on the phone with him, but the bigger picture concern is her ability to be protective of her daughter. The Department is concerned about any contact [the child] might have with John. Certainly a phone conversation is not going to cause physical harm to [the child], but there was no way that [the child] was not present to see another child beat [sic] to death, which certainly would have an emotional impact. The Department is also concerned about [the client's] ability to be protective of [the child] should John be released from jail. [The client] has made it [apparent] that she supports John and does not believe that he has any culpability in this crime, which puts [the child] at risk. We need to meet with your client to find out what she plans to do to mitigate these concerns....

Thus far, no such meeting has taken place. Peck chalks that up to a combination of communication breakdowns between her and DHS staffers, as well as the suggestion that the ex-wife should be criminally charged over the aforementioned phone call-related allegations. "I cannot facilitate a client disregarding her Fifth Amendment rights to remain silent," she says.

In Peck's view, the importance of today's hearing goes beyond the specific individuals involved.

"My concern is the broader question of what happens to people who stand up for family members," she says. "Is DHS really going to be in the business of confiscating children before the accused goes on trial when that child is otherwise in no immediate physical danger?"
KEEP WESTWORD FREE... Since we started Westword, it has been defined as the free, independent voice of Denver, and we'd like to keep it that way. With local media under siege, it's more important than ever for us to rally support behind funding our local journalism. You can help by participating in our "I Support" program, allowing us to keep offering readers access to our incisive coverage of local news, food and culture with no paywalls.
Make a one-time donation today for as little as $1.