The Most Nerd-tastic Signs From Denver's 2018 Women's March

Carrie Fisher, still speaking volumes with a stare. Teague Bohlen
The second Women's March of the Trump era motivated thousands of people to take to the streets in downtown Denver on Saturday, January 20, and speak their minds, express their anxiety, proclaim their power, and generally make the statement that they will not go quietly into that political good night. Protesters carried signs that were clever, signs that were meme-worthy, signs that were poignant, and signs that were powerful. And then there were the signs that not only spoke out, but also let some geek flags fly.

From Star Wars to Harry Potter to Dr. Seuss to Margaret Atwood, here are the ten best nerd-tastic signs we spotted at the 2018 Women's March in Denver. 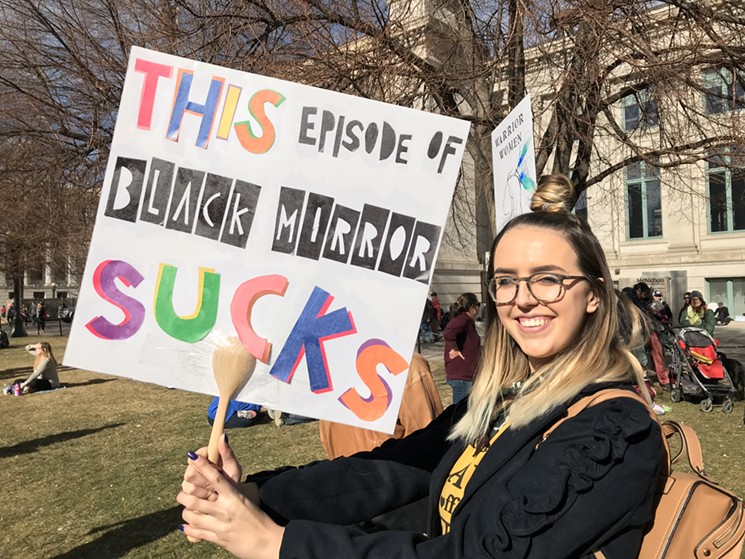 Wait, this isn't the final episode, is it?
Teague Bohlen
10. "This Episode of Black Mirror Sucks"
The British-import sci-fi anthology that many Americans have binge-watched on Netflix is essentially all about sociological commentary masked as futuristic horror (think The Twilight Zone if you're among the uninitiated). So the reference both makes sense and is equally unsettling, because if we were people trapped in an episode of Black Mirror, we wouldn't really know it, would we? Far out.

Seriously, why don't they make these jackets in 2XL extra tall?
Teague Bohlen
9. "RESIST"
When Star Wars was just a twinkle in George Lucas's mind's eye, did anyone really expect that the movie would become a touchstone for political and social justice? Now the parents that played with the X-Wings and TIE Fighters as kids are dressing their own kids up in rebel flight jackets and helping them make signs with the Rebel insignia emblazoned on them. Fandom (and parenting): You're doing it right.

Books: typeface resistance.
Teague Bohlen
8. The Atwood Effect
Margaret Atwood's Handmaid's Tale was a relatively common sight at the 2018 march, but these two went the extra mile to quote Thomas Jefferson and also refer to a number of dystopian novels that Americans are able to read all over again with a completely new perspective. That sense of fresh horror that you read as you flip the pages of Orwell or Bradbury? Yeah, that's familiarity. A lesser-known Dumbledore quote: "I could not possibly eat another chocolate frog."
Teague Bohlen
7. "We Must Choose Between What Is Easy and What Is Right"
Harry Potter is to the children of the 2000s what Star Wars is to the kids of the ’70s and ’80s: a near-religion. So the Potter-references are strong, ranging from signs about Dumbledore's army to Hogwarts falling to various and sometimes profane references to Voldemort (see below). But Professor Dumbledore is something of a font of wisdom for the books, and so it's quotes like these that are not only reference, but reverence.

I'll stop wearing black when they make a darker color.
Teague Bohlen
6. Welcome to Night Vale and Twilight
It's a two-fer for some currently and formerly popular tween fandoms — the zeitgeisty podcast of gentle weirdness that is Welcome to Nightvale meets the sparkly romance (and now joke-fodder) vampiric obsession that Stephanie Meyer's books brought into the world. Just the fact that our nation's youth have moved on to ridiculing Twilight should give us all hope for a brighter future.