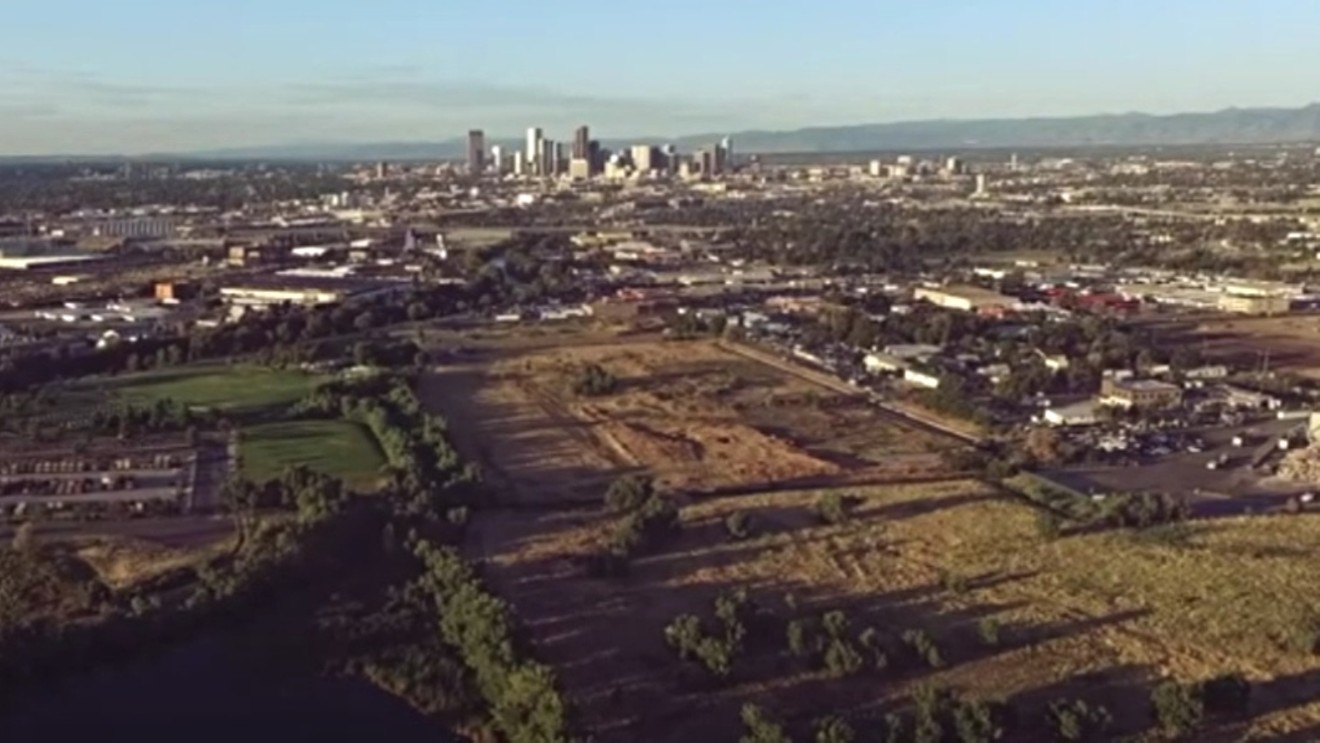 An aerial view of North Denver. YouTube
A new report led by researchers from the Dickinson Lab at the Colorado School of Public Health identifies North Denver as a pollution hot spot thanks to a confluence of factors involving an abundance of industrial businesses, as well as railroad and highway traffic that puts the health of its approximately 50,000 residents at risk every single day.

The study documents 183 facilities in North Denver, a twenty-square-mile section of the city that encompasses parts of Denver and Adams counties, including Commerce City, with at least one documented violation in the past three years; 94 of them, or more than half, are current. And some firms have been out of compliance with environmental standards for twelve out of the past twelve quarters.

Ean Thomas Tafoya, a Denver mayoral candidate and state director for GreenLatinos, an advocacy organization also involved in the study (along with the Wylie Lab at Northeastern University and GreenRoots Chelsea), stresses that the findings are "built on self-reported violations — things the companies themselves have reported."

He adds: "One of the most stark statements I heard from a community member is that the government is asleep at the wheel if we're having this many violations concentrated in one community. That's why this is about naming names, so we can move into a better future with more compliance."

Report co-authors Tafoya as well as Katherine L. Dickinson, Carla Nyquist and Stephanie Pease, all affiliated with the Colorado School of Public Health, write that "North Denver has a decades-long history of industrial and rail land usage, along with inadequate investments in amenities serving the population that resides in this area. Most of North Denver is zoned for industrial use, and between 2,000 and 8,000 businesses operate there." 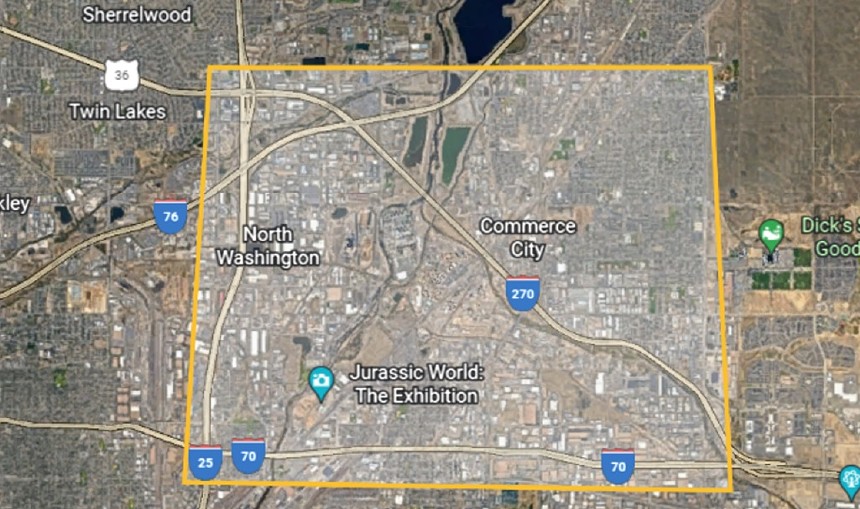 A map of North Denver from the report.
greenlatinos.org
The imprecision of this estimate is among the mysteries that concerned Tafoya, who recently celebrated the passage of Public Protections From Toxic Air Contaminants in the last legislative session.

Tafoya was involved in a 2018 settlement agreement over the ongoing I-70 Project that called for what he describes as "a cumulative health assessment for North Denver." A team from Colorado State University is handling that, but in the meantime, he reveals, "I was approached by CU Public Health, and they asked me, 'What kind of research do you want?' I said we didn't know all the businesses in the area, who's putting out pollution, what their names are, and if smaller businesses are skirting under the radar. I wanted an assessment that would look at different sectors, including the transportation sector — miles driven, the amount of pollution — and the goods-and-services component that has to do with all the trucks and trains."

The finished product breaks down information into four major subject areas, as outlined in the following excerpt from the executive summary:

• North Denver is home to multiple high-profile energy facilities, including the Cherokee Generating Station and the Suncor Oil Refinery, that emit large amounts of air and water pollution and have repeated EPA violations.
• Additional energy facilities in the area include the Metro Wastewater Reclamation District’s power generation facility and the Phillips66 and Sinclair petroleum terminals.
• Existing data sources make it difficult to track exactly who benefits from the energy production originating in North Denver.

• At least 34 food production, processing, and storage facilities are located in North Denver, including large brands such as PepsiCo, Sysco, Safeway, and Amazon Fresh, and many smaller specialty operations. Distribution of these goods to areas outside of North Denver contributes to vehicle traffic and associated pollution.
• The Nestle-Purina pet food factory in North Denver is a source of noxious odors and has been out of compliance with the Clean Water Act for the past three years.
• Many additional facilities producing non-consumer goods, like asphalt, concrete, and other construction materials, are also frequent Clean Water Act violators.

• North Denver is a major transportation hub, with three major highways, multiple light rail and train tracks, and large rail yards/interchanges.
• Hundreds of thousands of vehicles travel through North Denver every day, including tens of thousands of diesel-fueled trucks. Each day, about 175,000 vehicles drive past Swansea Elementary on I-70, and 460,000 vehicles drive through the I70-I25 intersection known as “The Mousetrap.” In comparison, only 300,000 vehicles travel daily across the George Washington Bridge in New York City.
• Neighborhood-level passenger rail data was readily available through CDOT, RTD, and Amtrak, but freight rail information was only available in aggregate at the state and regional level. By federal law, freight rail information at areas smaller than the state level is proprietary, meaning that communities near rail facilities do not have access to information about the number of trains or types of freight going through their neighborhoods.

• More than ten solid waste and recycling facilities are located in the North Denver and Commerce City area, as well as the Metro Wastewater Robert W. Hite Treatment Facility. These facilities serve millions of Colorado residents in the Denver Metro area, while producing unpleasant odors and water pollution for North Denver residents.

The report also lists all 183 violations — a rundown that covers more than ten pages. Because the offenses were self-reported, Tafoya suspects the total is far from complete. "There were only three clean-air violations, and we think that comes down to reporting and data, not that they aren't occurring," he says.

He sees the study as "a tool to fight back."

Click to read the North Denver Environmental Justice Report and Data Audit.
KEEP WESTWORD FREE... Since we started Westword, it has been defined as the free, independent voice of Denver, and we'd like to keep it that way. With local media under siege, it's more important than ever for us to rally support behind funding our local journalism. You can help by participating in our "I Support" program, allowing us to keep offering readers access to our incisive coverage of local news, food and culture with no paywalls.
Make a one-time donation today for as little as $1.