As You Bike It: Denver Pedal Cab Service Area Doubles 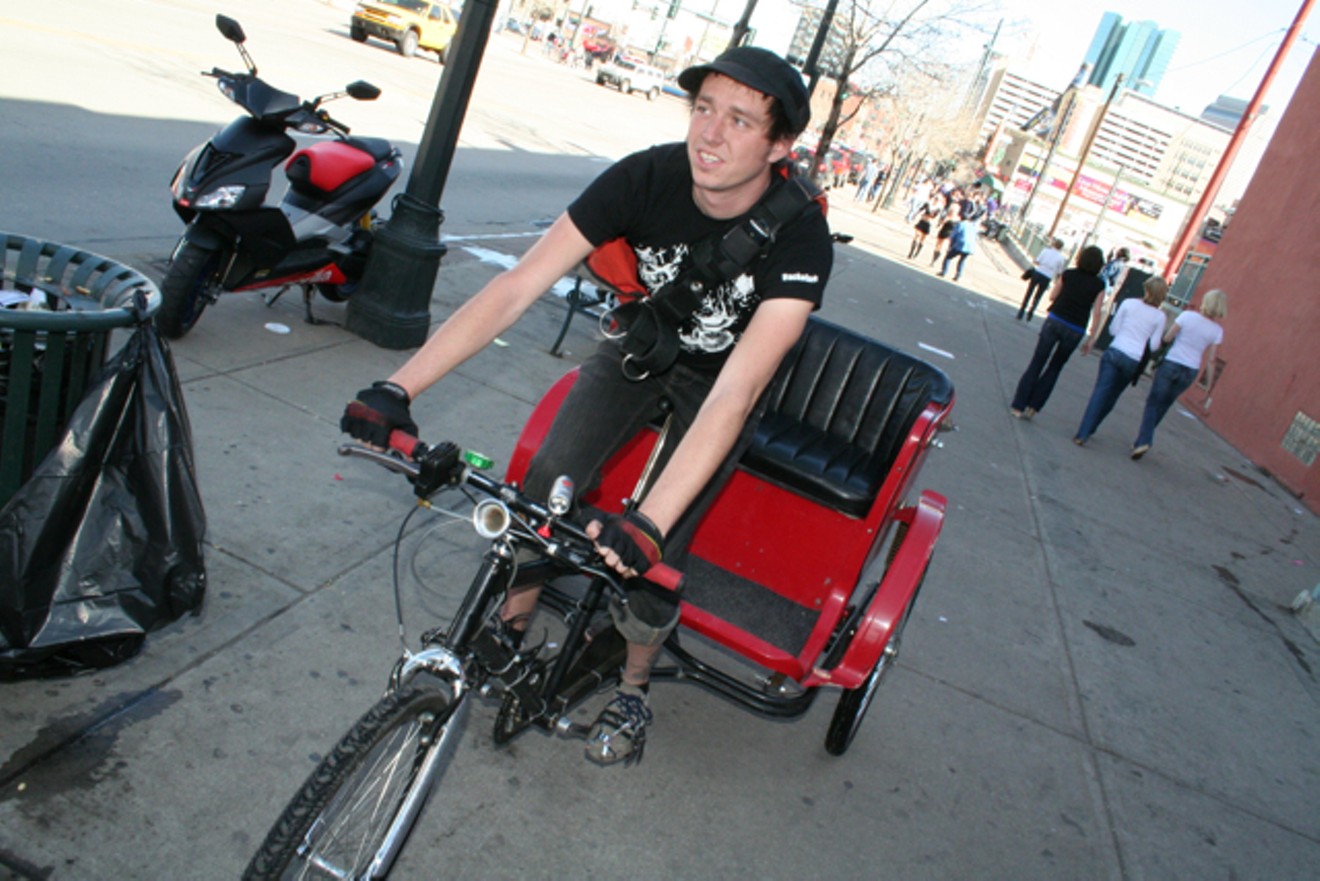 Wheeling and dealing. Westword
The City of Denver is expanding the areas where pedal cabs can legally operate — just in time for the first pre-season Broncos home game against the Dallas Cowboys on Saturday, August 13.

The expansion will double the area where pedal cabs are allowed to operate, with an emphasis on access to Empower Field at Mile High. Pedal cabs will also now be able to operate in the RiNo Art District, Auraria (excluding Auraria Parkway), in the Golden Triangle and through a larger area of Capitol Hill.

According to the Department of Transportation and Infrastructure, the city decided to expand the areas where pedal cabs can operate because they are small businesses that could use the support, particularly as more people return to downtown for work and others come to the area for entertainment.

In February 2019, there were about 350 licensed pedal cab drivers in Denver doing well in the designated area, according to Eric Escudero, communications manager for the Denver Department of Excise and Licenses, but because of the pandemic and the 16th Street Mall construction, the number of drivers has declined to just 63.

And they lost one of their most popular areas: The redevelopment of the 16th Street Mall has taken away a major corridor where the pedal cabs used to operate. 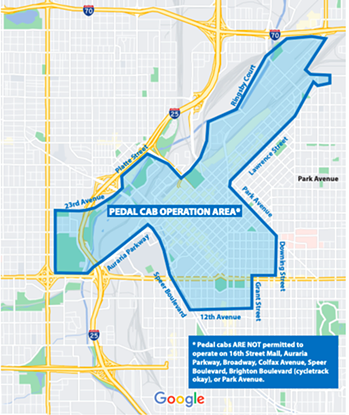 The expanded area of operation for pedal cabs.
City and County of Denver
"We've been working with them a lot, and it was clear that they wanted to expand to other areas of the city," says Vanessa Lacayo, marketing and communications specialist for DOTI. "While we have redevelopment going on along the 16th Street Mall, it made sense to try to help them out."

Denver is seeing more and more visitors, with overnight guests spending more than $1.8 billion on transportation alone in 2021, according to Visit Denver. DOTI wants people to start using pedal cabs not just to support the people who operate them, but also to decrease vehicle traffic in Denver.

"From a city's perspective, we're always looking at different ways to move people in and around the city that don't involve vehicles," Lacayo says.

The upcoming Broncos game will be a test run to see how well the pedal cabs do. With the expansion into Auraria, fans will have the opportunity to park at places like Ball Arena and take a pedal cab to near Empower Field rather than paying for parking by the stadium or taking the light rail from farther away. But even with the expansion, DOTI notes, pedal cabs will not be able to operate "in areas closer to Empower Field at Mile High other than the designated drop-off points at Morrison Road and Old West Colfax Avenue and at the Bronco Bridge over the South Platte River on days of [large] events."

Pedal cabs are also banned from the 16th Street Mall at all times, as well as Denver's Central Business District from 7 a.m. to 9 a.m. and 4 p.m. to 6 p.m. during the weekdays; they are also not allowed on Speer Boulevard, Auraria Parkway, Colfax Avenue, Broadway and Brighton Boulevard.

Updated: This story was updated at 4 p.m. August 13 to include DOTI's restrictions around Empower Field, adopted earlier that day.
KEEP WESTWORD FREE... Since we started Westword, it has been defined as the free, independent voice of Denver, and we'd like to keep it that way. With local media under siege, it's more important than ever for us to rally support behind funding our local journalism. You can help by participating in our "I Support" program, allowing us to keep offering readers access to our incisive coverage of local news, food and culture with no paywalls.
Make a one-time donation today for as little as $1.
Katrina Leibee, a recent graduate of Colorado State University, is an editorial fellow at Westword, covering politics, business and culture.
Contact: Katrina Leibee
Follow:
Twitter: @katrinaleibee