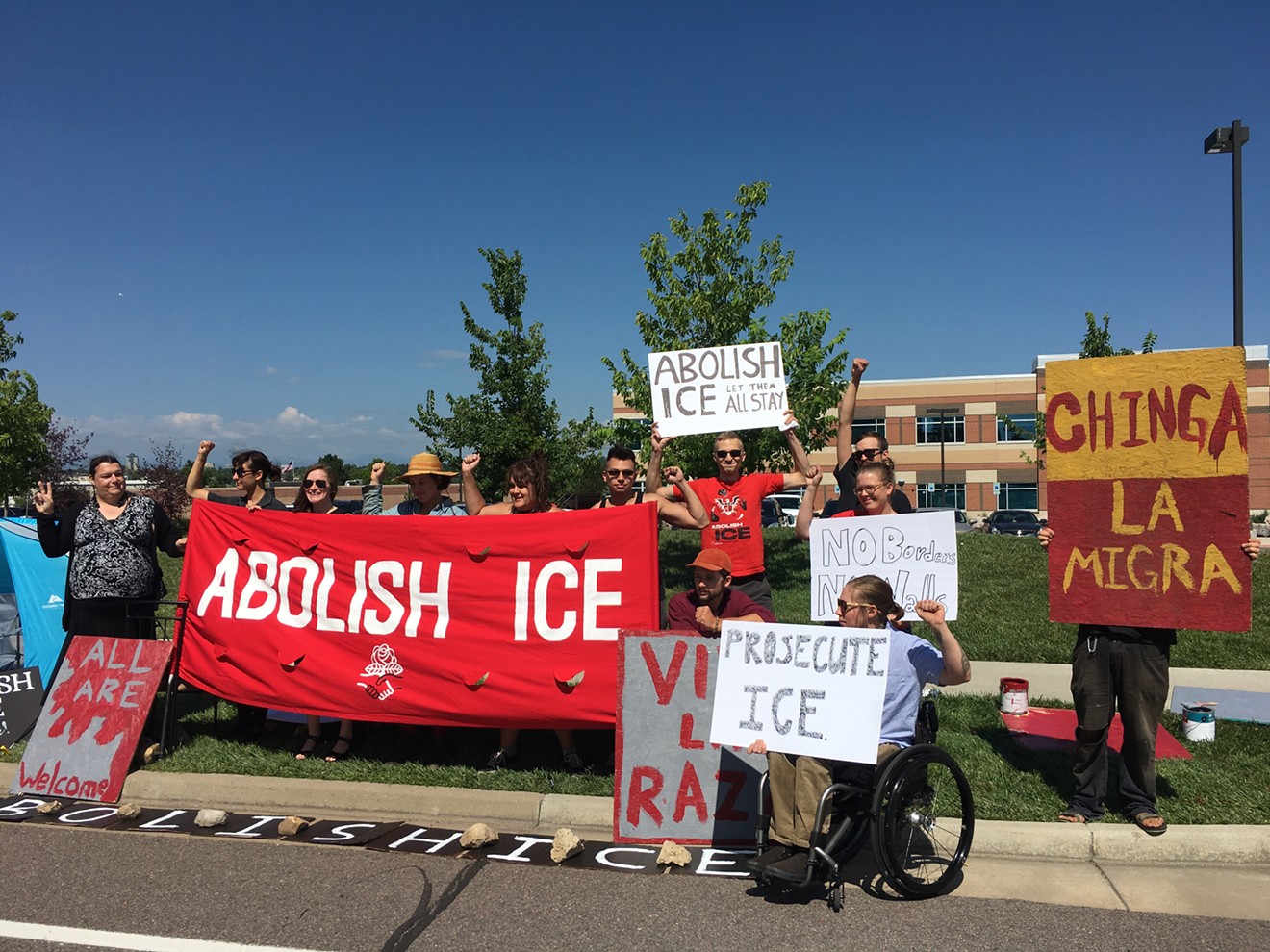 Activists will be gathered in front of the Denver ICE field office all week. Sara Fleming
This week, Immigrations and Customs Enforcement officers heading to the local field office in Centennial will be met by a handful of protesters holding “Abolish ICE” signs day and night as part of a vigil that began Sunday, July 29, and will end Thursday evening. The protesters are at the field office to urge the agency to speed up the reunification process for families separated at the U.S.-Mexico border and to stop separating families in Colorado.

“The reality is that ICE’s job is to separate families. They’re in the business of deportation, in the business of taking fathers and mothers away from their children,” says Jordan Garcia, organizing director with the American Friends Service Committee, a national group focused on social justice that has joined the local protesters.

Thursday, July 26, was the second deadline for the government to reunite children who were separated from their parents under President Trump's "zero tolerance" policy while attempting to illegally cross the border. However, as of Thursday, 914 parents were still deemed "ineligible" to be reunited with their families. Some of these parents have criminal records or weren't biologically related to the kids who crossed the border with them, even if they were the primary caretaker. But at least 463 parents have already been deported without their children, and the government is unsure of where the parents are.

In other cases, children have been released from detention centers but their parents are still detained. Sarah Jackson, director of the local nonprofit Casa de Paz, says that there are five such parents still detained in the GEO facility in Aurora. (The rest of the fifty or more parents who were detained were either released or reunited with their children in Texas but are still going through immigration proceedings — in Colorado.)

“[The government] can’t make excuses that there are parents that don’t qualify for reunification with their kids,” says Jeanette Vizguerra, an influential Denver activist who helped organize the protest. (Vizguerra originally spoke to Westword in Spanish.) “Why didn’t they keep track of where parents and their children were? They lost them, and now they’re justifying their own ineptitude.”

Carl Rusnok, a regional spokesman for ICE, sent the following statement to Westword: “The Departments of Homeland Security and Health and Human Services are working tirelessly to reunite parents and children within the court ordered timeline. To do so requires large scale transfers of minors to ICE custody and both agencies have been actively engaged in managing the logistical challenges these large-scale transfers present.”

The coalition of organizations involved in this particular protest is calling itself “Abolish ICE Denver." In a press release, organizers with the American Friends Service Committee said their goal was to tell legislators they want “an end to family detention and Trump’s Zero Tolerance policy, the abolishment of ICE and Customs and Border Patrol, and to fight back against the Muslim ban." Members of participating organizations, including Denver’s Democratic Socialists of America, Standing Up for Racial Justice and Food Not Bombs, will take shifts protesting at the field office throughout the week. They also invite the public to join them in solidarity.

Matt Wozniak, a member of DSA, says he is planning to camp out overnight outside the office for at least two nights this week. “It's only been less than twenty years since [ICE] was created — after 9/11 — so we've gone the rest of our history without it, and now that they're basically doing an ethnic cleansing in this country…let's get rid of them," he argues. "It's a racist organization that is carrying out a racist agenda.”

Vizguerra is, for now, the only undocumented immigrant participating in the protest. Others, she says, were involved in the planning process but feared standing directly outside of the ICE office because they might be identified as someone who could be deported. “I don’t have anything to lose,” says Vizguerra, who entered sanctuary in 2017 to avoid deportation. “Someone has to keep fighting.”
KEEP WESTWORD FREE... Since we started Westword, it has been defined as the free, independent voice of Denver, and we'd like to keep it that way. With local media under siege, it's more important than ever for us to rally support behind funding our local journalism. You can help by participating in our "I Support" program, allowing us to keep offering readers access to our incisive coverage of local news, food and culture with no paywalls.
Make a one-time donation today for as little as $1.