The event wasn't organized by a nonprofit or a political party. It was the product of Syrian-American Amal Kassir and her two friends panicked by Trump's announcement that he would ban refugees and immigrants from seven Muslim nations. They wrote a Facebook post asking people to show up at DIA to welcome their friend Omar — and people, desperate to find a way to combat the new anti-immigrant, anti-Muslim policy, did.

The event came in the wake of a day of refugees being detained by law enforcement at airports nationwide — and protests around the country.

"We’ve gotten reports of people being detained all over the country,” Becca Heller, the director of the International Refugee Assistance Project, told the New York Times. “They’re literally pouring in by the minute.”

Late on January 28, a federal judge put a stop to some parts of Trump's refugee ban. 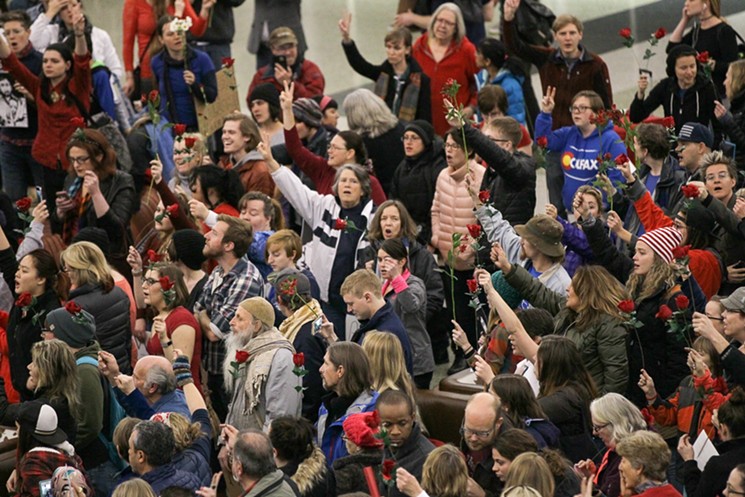 Black Lives Matter activist Amy Brown was flummoxed by how the demonstrators — many people of color and many wearing hijabs — were "being observed and corralled by law enforcement."

As an organizer for the Service Employees International Union, she said she has protested many times at DIA. "This is literally the most peaceful gathering of people I've ever been to," she said. Despite facing the threat of arrest, the protestors at DIA were peaceful and joyful.
Brandon Marshall
Compared to other demonstrations in the wake of Trump's election, the tone at this gathering was calm, as demonstrators articulated a clear vision of a multicultural, egalitarian, welcoming United States that Trump's policies — including a refugee ban, the construction of a wall between the United States and Mexico, and his ban on immigrants from seven largely Muslim nations — have all but incinerated.

That the police were responding with such a visible presence and with multiple threats of arrest was what Brown called "selective enforcement," targeting Muslim activists. "Why are you treating this group differently than others?" she asked. 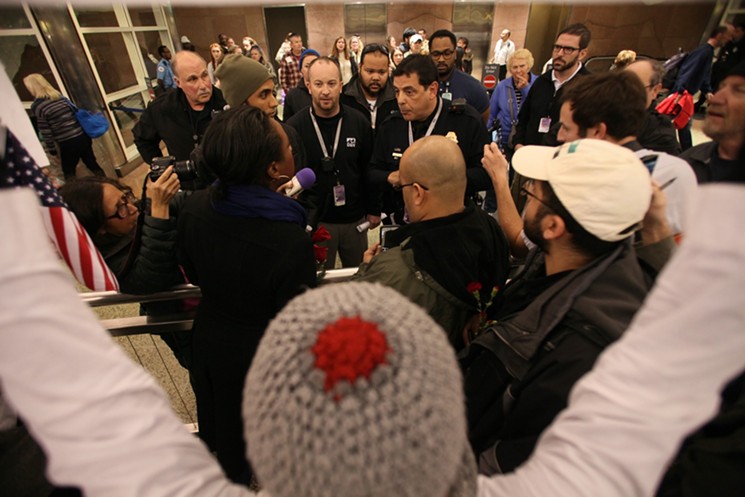 Commander Antonio Lopez warns representatives Leslie Herod and Joe Salazar that if the crowd does not disperse, protestors will be arrested.
Brandon Marshall
State representatives Joe Salazar and Leslie Herod tried to negotiate with Denver Police Commander Antonio Lopez, who threatened the lawmakers and the other demonstrators with arrest and told them that their First Amendment rights did not apply within the 54 square miles of Denver International Airport if the crowd did not have a permit.

Assistant City Attorney and former pro-football player George Hypolite said that the city did not have time to process the permit the organizers had applied for earlier in the day. Because DIA is primarily a place that people go through, the City has the legal right to restrict political speech and freedom of expression.

"So political expression can't happen in the airport?" asked a baffled Herod.

Lopez said she was correct. When demonstrators attempted to defend the gathering based on the First Amendment, he continued to threaten to arrest them and said, "We can debate that in court." 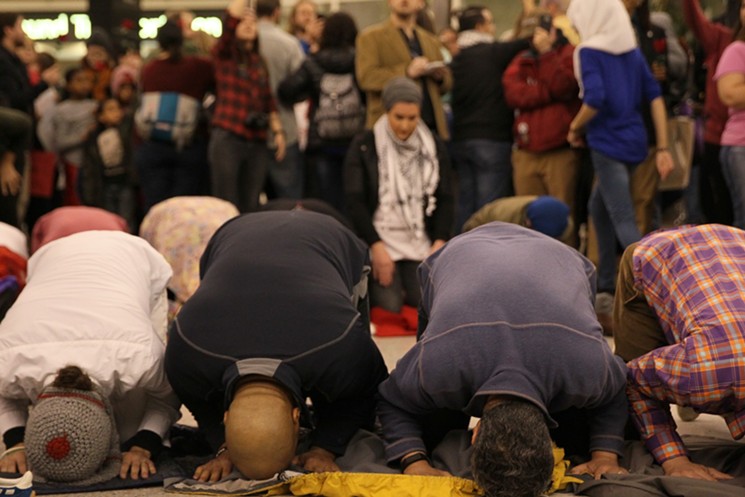 Muslim protestors pray in DIA's Great Hall.
Brandon Marshall
Unsure as to whether the police would actually start arresting people, the crowd surrounded a group of Muslims, who laid their coats on the ground and prayed. After they finished, they stood and embraced each other. Demonstrators cheered.

Kassir and Lopez negotiate whether the protest can stay inside the Great Hall.
Brandon Marshall
Soon after, a beleaguered Lopez negotiated with Kassir and other leaders that the protest could be relocated outside, to the south plaza by the Westin Hotel. That's where Mayor Michael Hancock delivered the State of the City address in July 2016, touting the Denver Police Department as a model of national criminal-justice reform. The crowd marched to the plaza, singing.

Relocated, the demonstrators recited the Pledge of Allegiance, lingering on the closing lines: "...with liberty and justice for all." They sang, "This Land Is Your Land." They spoke passionately about the Constitution and U.S. values of freedom and equality. They celebrated the police, even after being threatened with arrest. They chanted: "Bring them home." "We the people," was one of the rallying cries.
Brandon Marshall
Kassir evoked a litany of people in the United States, including Jews, Native Americans, the Irish, Muslims, Christians, slaves, even the founding fathers, asking the crowd to cheer for all of them.

She even said, "Give it up for the journalists," a strikingly different attitude toward the media than that of Trump and his administration, who have lobbed threats and insults at reporters for months.

Activist and licensed lawyer Sarah Fitouri said of Trump's ban on refugees, "We know this is against the values of this country and against the Constitution," before mourning that she may never see her Libyan grandmother or little cousin again.

Police Chief Robert White and Deputy Chief Matt Murray stood to the side, watching the demonstration and chatting cheerfully. At one point, an activist acknowledged White was present, and he smiled and raised his hand to the crowd.

After hours, and much to the surprise of some people — who had begun to suspect that Omar was a ruse organizers were using to justify their presence at the airport — the young man, wearing a Rockies hat and a big grin, actually showed up. Omar arrives.
Kyle Harris
He was visibly moved as hundreds greeted him, cheering his name and "Welcome home."

His friends hugged him. He thanked the crowd. "We are all one," he said. "God bless everybody. God bless America. And God bless all you beautiful people. We are one."

Another man, Omar Kaifo, owner of the restaurant Shish Kabob Grill, which sits across from the Statehouse, told the crowd about his immigration to the United States from Aleppo, Syria, in 1988. He bragged that he had no criminal record, not even a traffic ticket. He contrasted himself with Trump: Unlike the president, Kaifo says, he pays his taxes.

He spoke of the Syrian families, the children and babies who fled the violence of Assad and have found safety in the United States. "They escaped the torture of our bodies by Bashar Assad in Syria," he said.

Chief Robert White watched the protest from a distance.
Brandon Marshall
Organizers spoke optimistically about the future of the United States. At one point during the protest, Kassir said, "I need to make it very clear that this has been a success."

As the crowd disbanded, Kaifo told Westword that Trump does not have God in his heart. He has the devil there instead, she said, and that is why he is banning people from taking shelter in the U.S. from the brutality of Assad's dictatorship.

At the end of the night, the Denver Police Department — whose commander had earlier warned the protesters that they would be arrested and told peoplethat  their First Amendment rights did not apply at the airport without a permit — posted to Twitter: "Peaceful protest at DIA has ended. DPD kept folks safe and protected freedom of speech."

Here are more photos of the protest at Denver International Airport.