A Facebook post promoting #SelfieSaturday, the event Facebook
Denver City Council has announced a plan to purchase PT's All Nude II, a defunct strip club at 8315 East Colfax Avenue, for $1.3 million, in an effort to spur an economic revival in the area. The building was shuttered in 2016 because of numerous public-safety issues, with the most prominent among them being a September 2015 murder on an evening promoted as #SelfieSaturday.

As we've reported, the main players in this tragedy were Stephen Futrell and Jeremy Garcia. According to an arrest affidavit accessible below, Futrell, nicknamed "Magic," shot Garcia because he didn't like the way the latter man shook his shoulders.

The incident took place just after midnight on September 13, 2015 — and police quickly determined that surveillance video had caught images of Garcia and his suspected killer both inside and outside the club.

Later that morning, investigators quizzed a source whose identity is protected in the police report. That person said Futrell had been coming into the bar for about two months, usually on Fridays and Saturdays — and he introduced himself as "Magic." For his part, Garcia had been a regular for a month or so. 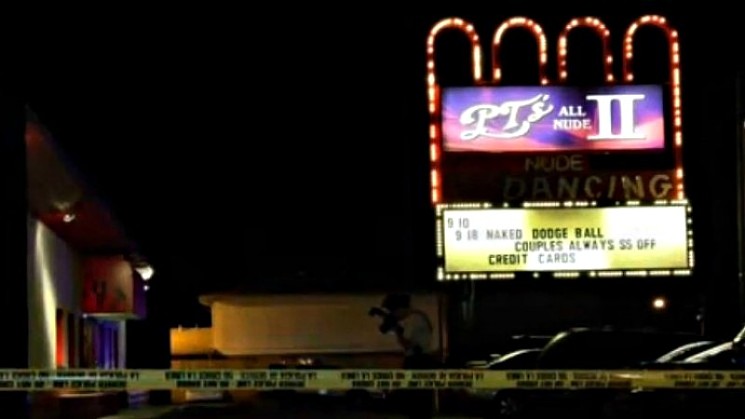 Outside PT's II after the homicide.
Fox31 file photo
On the evening in question, Futrell apparently felt Garcia got a little too familiar with him. Here's an excerpt from the affidavit:

Futrell went outside a short time later, presumably to smoke a cigarette. After that, Garcia headed outside, too — and within minutes, a woman ran into the club to announce that someone had been shot.

How did the cops find Futrell? Turns out he'd given his phone number to the unnamed source a couple of weeks earlier — and one of his aliases was "Mr. Magic."

Stephen Futrell, aka "Magic."
Denver Police Department
The Denver District Attorney's Office charged Futrell with first-degree murder after deliberation and possession of a weapon by a previous offender — second offense. Then, in August 2016, Futrell made a deal, pleading guilty to second-degree murder in exchange for the dropping of two other charges: first-degree murder and a weapons beef.

His sentence: 35 years in prison.

The slaying at PT's II was hardly the only crime to have taken place at businesses once referred to by the euphemism "gentleman's club." In January, we counted at least eight killings or attacks at Colorado strip clubs over the previous six years. But the combination of incidents at the venue, including a New Year's Eve 2015 fire, resulted in a reputation exemplified by the following online review, posted shortly before it closed: "Went out to the parking lot and heard a gun go off so I had to drop to the ground while some guy bled out to death 15 feet away. DONT GO! Trashy area and SKETCHY people."

The purchase of PT's II is expected to be approved this fall. Click to read the Stephen Futrell arrest affidavit.