An illegal marijuana grow in Pueblo County that was raided in late June. Courtesy of the Pueblo County Sheriff's Office
The headline of a post published in this space last year posed the question, "Is Pueblo the Drug Bust Capital of Colorado?" And in recent months, law enforcement in the community has answered this question with a resounding "Yes," particularly when it comes to marijuana crimes with an international flavor. In a series of raids over the past four months, the Pueblo County Sheriff's Office, working in conjunction with other agencies, has seized more than 8,000 cannabis plants at allegedly illegal grows associated with foreign nationals. Among those arrested as part of the operations were eight men from Mexico and four from Cuba.

"This is another example of people coming from out of state to grow marijuana illegally to then sell it on the black market,” said Pueblo County Sheriff Kirk M. Taylor in a statement. He added, "What’s concerning to me is they are infiltrating nearly every corner of our county with this type of illegal activity."

Plenty of Pueblo-area marijuana busts covered in this space have involved Americans, though many of them weren't originally from Colorado. On April 5, 2016, for example, we told you about the arrest of nine men from Florida for illegal pot grows. And a roundup published just over three weeks later, on April 27, collected information about 22 Pueblo busts and 4,600 plants seized in just over a month; three people in a family whose members had come to Colorado from both Florida and Tennessee were among those fitted for cuffs.

At the same time, Sheriff Taylor has remained concerned about what he sees as the weed-related activities of Mexican drug enterprises in the Pueblo area. The PCSO recently maintained that four outdoor grows discovered in or near the San Isabel National Forest over the past five years were tied to cartels. In 2012, two grows were shut down, with 9,400 plants seized in the process. In October 2015, approximately 2,400 plants were spotted near the forest's Millset Trail. And in July 2016, 1,000 plants were uprooted from private property near Table Top Mountain.

Late June brought a fifth raid in this series. Two separate fields on U.S. Forest Service land near Huckleberry Hills, just outside the Town of Rye, yielded 7,400 plants. Two people wearing camouflage clothing who were thought to be caring for the grow evaded arrest, and because they got away, no definitive statements were made about a cartel connection. But their bounty was hauled away, and the sheriff's office estimated its value at $7 million. This outdoor grow was located along Colorado Highway 96 West, just outside Pueblo.
Courtesy of the Pueblo County Sheriff's Office
Then, on October 2, the PCSO conducted another major operation near Colorado Highway 96 west, just outside Pueblo — and this time, there were plenty of people getting mug shots. One of them was a sixteen-year-old American who hasn't been named publicly owing to his age. But eight others are from Mexico. They are:

Here are photos of the men: 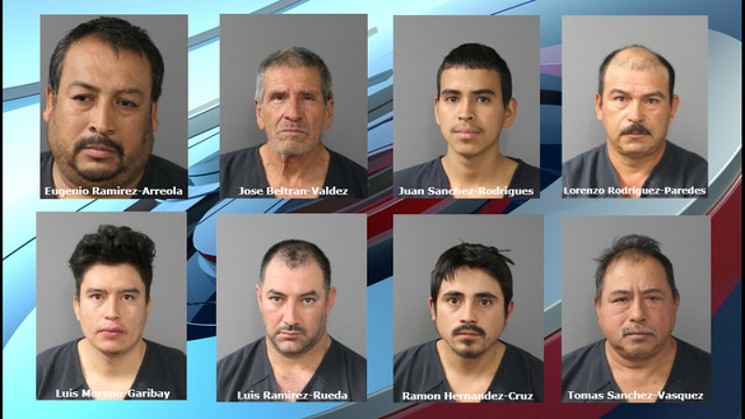 Eight of the nine people arrested for the Highway 96 outdoor marijuana grow.
Courtesy of the Pueblo County Sheriff's Office
After receiving a tip about marijuana growing on a forty-acre parcel along the highway, a search warrant was issued, and on the morning of the 2nd, PCSO detectives and deputies joined members of the SWAT team and agents with Immigration and Customs Enforcement (ICE) as they rushed onto two separate pot fields. Three suspects vanished into the woods, but the nine others, one of whom is said to be "a previously deported felon who will now face additional federal charges," were grabbed.

So, too, were the following: "Guns, several make-shift shelters, drying tables, drying lines, packaging materials as well as an elaborate irrigation system similar to those found in previous illegal outdoor grow operations that had cartel ties. There also was a complex watering system which included a well, operated by a large gas generator, a holding pond and a 300-gallon water storage tank." In addition, 500 pounds' worth of dried marijuana was on hand.

A week or so later came two more raids, both of which took place at residences in Pueblo — one on the 1800 block of 58th Lane and the second on the 500 block of Quail Road.

This photo is from the first residence.... 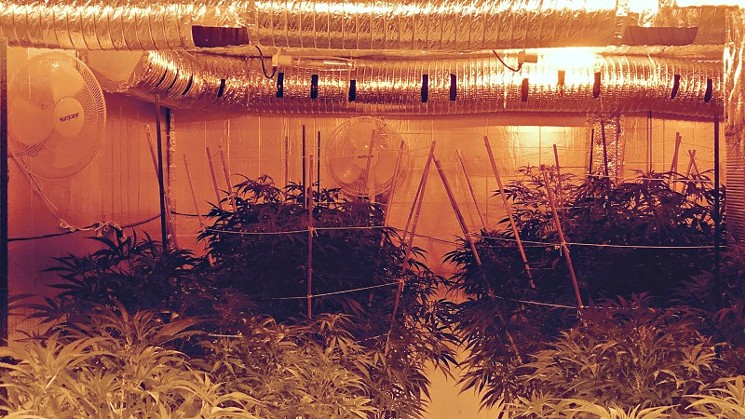 Inside the marijuana grow on the 1800 block of 58th Lane.
Courtesy of the Pueblo County Sheriff's Office
...while this shot was snapped at the second: 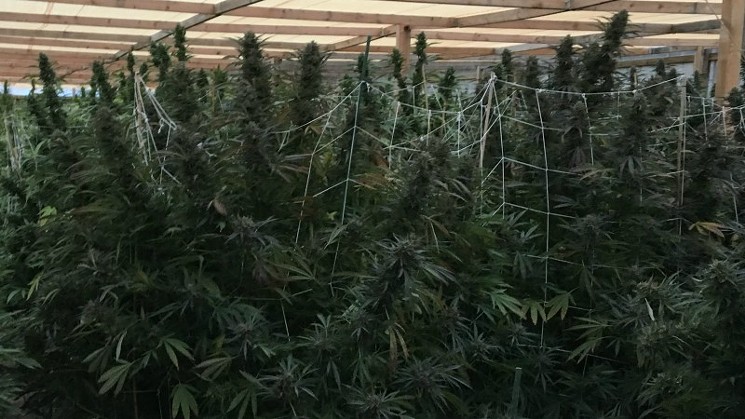 A photo taken inside a property on the 5000 block of Quail Road.
Courtesy of the Pueblo County Sheriff's Office
The total number of plants came to 365; the PCSO values them at $1 million. Also seized were five weapons and equipment — "elaborate lighting and irrigation systems to specifically grow marijuana."

Arrested at the first home were Jose Alberto Gonzalez, 31.... 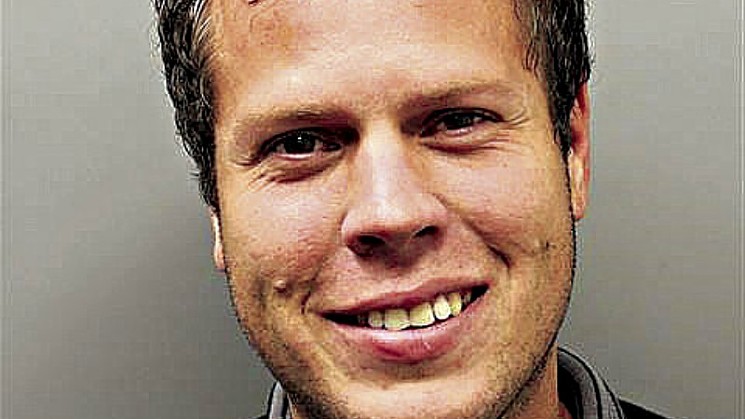 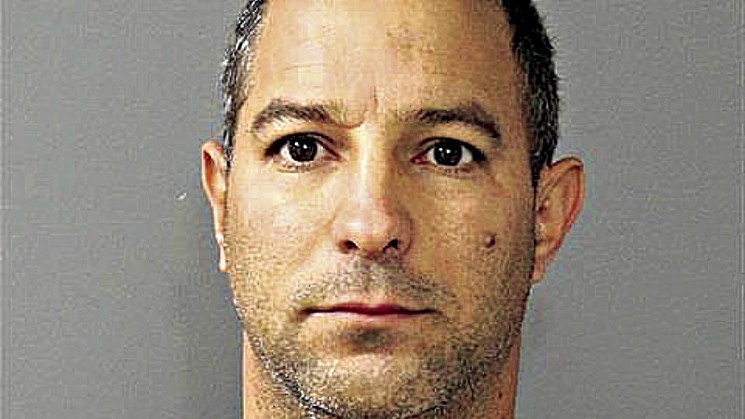 Sergio Luis Martinez-Suarez wasn't quite ready for his close-up.
Courtesy of the Pueblo County Sheriff's Office
...and Yoandris Bacallao-Ramos, 40. 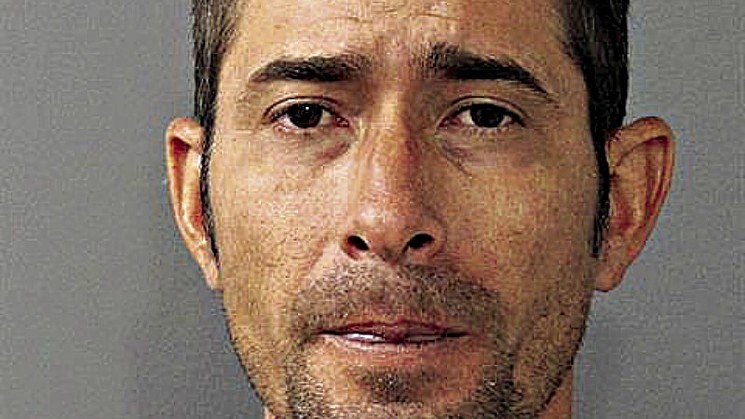 Yoandris Bacallao-Ramos is one of four Cuban nationals to be arrested on marijuana charges this month.
Courtesy of the Pueblo County Sheriff's Office
Found at the Quail Road address was Francisco Jose Sanchez, 50: 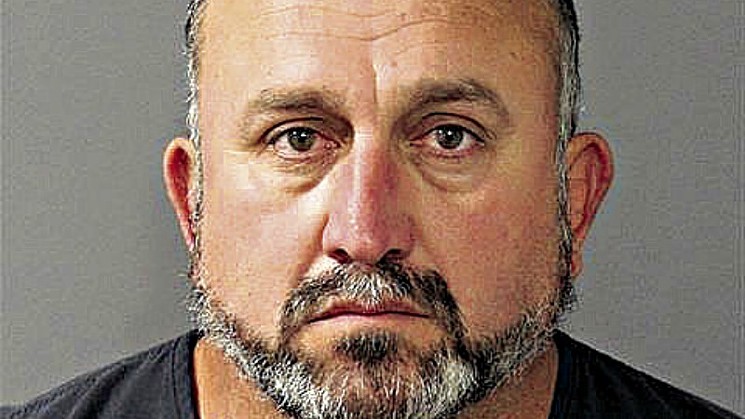 Francisco Jose Sanchez's booking photo.
Courtesy of the Pueblo County Sheriff's Office
In addition to decrying the incursion into Pueblo of drug criminals from outside the U.S., Sheriff Taylor also struck an environmental note, saying that chemicals used for fertilizer and alterations made to the electrical and watering systems at the homes were hazardous.

What's unclear about all this activity is whether the number of raids in Pueblo reflects an unusual amount of illegal marijuana activity there or Sheriff Taylor's aggressiveness when it comes to focusing on the trade. Either way, though, Pueblo is far and away the number-one spot in Colorado for the arrest of foreign pot growers.

Don't expect the local chamber of commerce to tout this achievement.