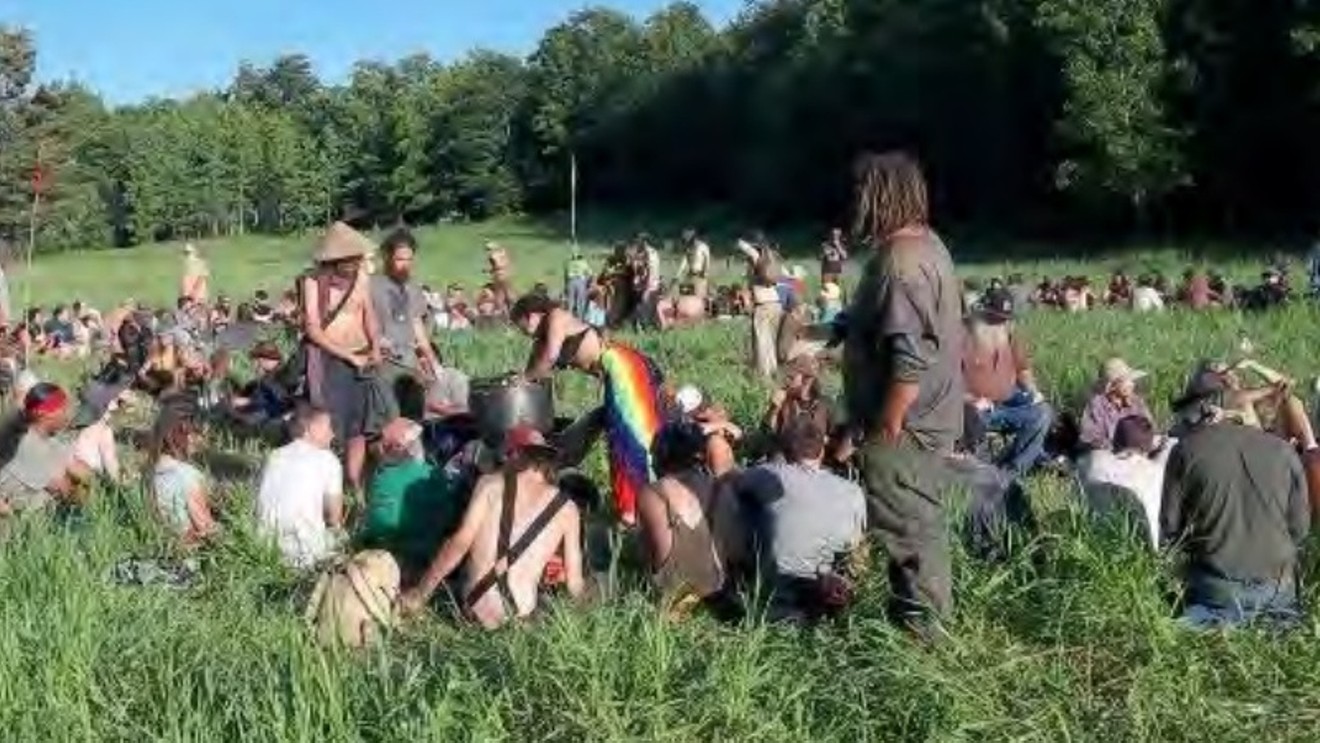 A photo of a past Rainbow Family gathering shared by the U.S. Forest Service in a presentation about planning for the 2022 event. United States Forest Service
On July 4, an estimated 10,000 members of the Rainbow Family, a throwback collective that takes its cues from the original hippie era, are expected to celebrate their fiftieth annual gathering in the Adams Park area of northwest Routt County, part of the Hahns Peak/Bears Ears Ranger District.

According to Hilary Markin, public-information officer for the United States Forest Service's National Rainbow Incident Management Team, more than a third of the anticipated horde is already on site — and plenty of problems have already cropped up.

"As of Wednesday, June 29, the current attendance is estimated to be around 3,400 attendees," Markin notes. "There have been 191 enforcement actions taken" through that date, she continues, including "incident reports, written warnings, violation notices and arrests." 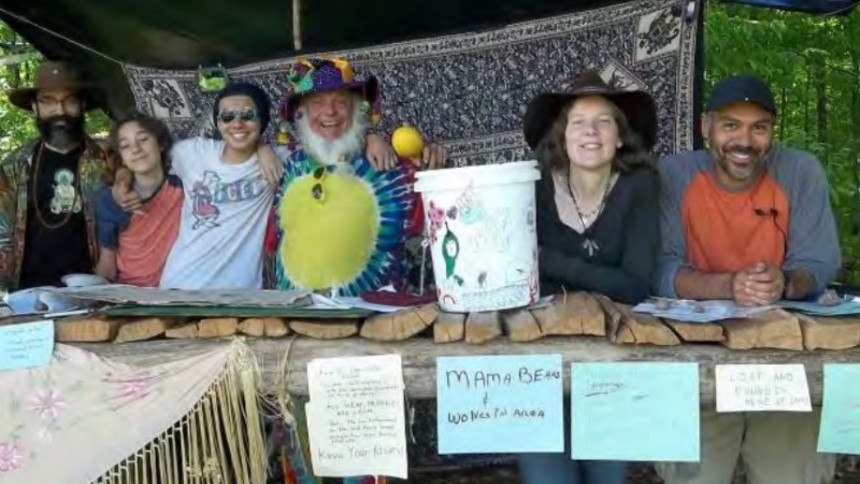 Another photo from the U.S. Forest Service presentation about planning for the 2022 Rainbow Family event.
United States Forest Service
Markin divulges that the offenses to date "ranged from inoperable equipment, damage to natural resources, narcotics possession and/or distribution, interference with federal officers, and assisting other cooperating law enforcement agencies."

Regarding future concerns, Markin acknowledges that the Rainbow Family "represents a very diverse group of individuals. As with any large population, a certain percentage of incident participants can be expected to engage in illegal or socially unacceptable behaviors. In part, some activities may include public nudity, civil disobedience, drug and alcohol abuse, confrontations between Rainbows and locals, abandoned or disabled vehicles, and traffic congestion and parking several hundred to several thousand vehicles."

A U.S. Forest Service primer describes the Rainbow Family as "a loose-knit group of people from throughout the United States and other countries who gather annually on a national forest," and Colorado has been a longtime favorite. The inaugural gathering took place in 1972 near Strawberry Lake in the Arapaho National Forest; since then, Family members have assembled in the state many times.

Here's a video of footage from a 2006 get-together:
The conclaves are supposed to be peaceful, but there have been exceptions. In July 2014, for example, Westword reported about a quadruple stabbing and a pit bull attack linked to the Rainbow Family. But the issues that concern Markin and other federal officials tend to focus on land management and other related issues.

"The Forest Service requires a special use permit for every public group of 75 or more people conducting a meeting or event on National Forest System lands," she says. "The Rainbow Family has consistently refused to comply with the permit process during national gatherings, since they claim to have no leaders and no one member who can speak for the group or sign a permit on behalf of the Family."

There have been repercussions for this position. "The Forest Service has periodically cited Rainbow Family members for failing to obtain a permit," Markin confirms. "However, the agency also works with the Family to adhere to a resource protection plan in lieu of a special use permit to protect the health and safety of individuals at the incident and in the surrounding community, to ensure sensitive resources are protected, to minimize any environmental damage and to coordinate post-event cleanup and rehabilitation of the event site."

To that end, the Forest Service issued a temporary closure order for a large part of California Park in the Routt National Forest. The order, which went into effect at 8 a.m. on June 25, was imposed "due to the high probability for excessive public use leading up to and during the Fourth of July holiday," a USFS news release states.

Here's a map of the closure area: 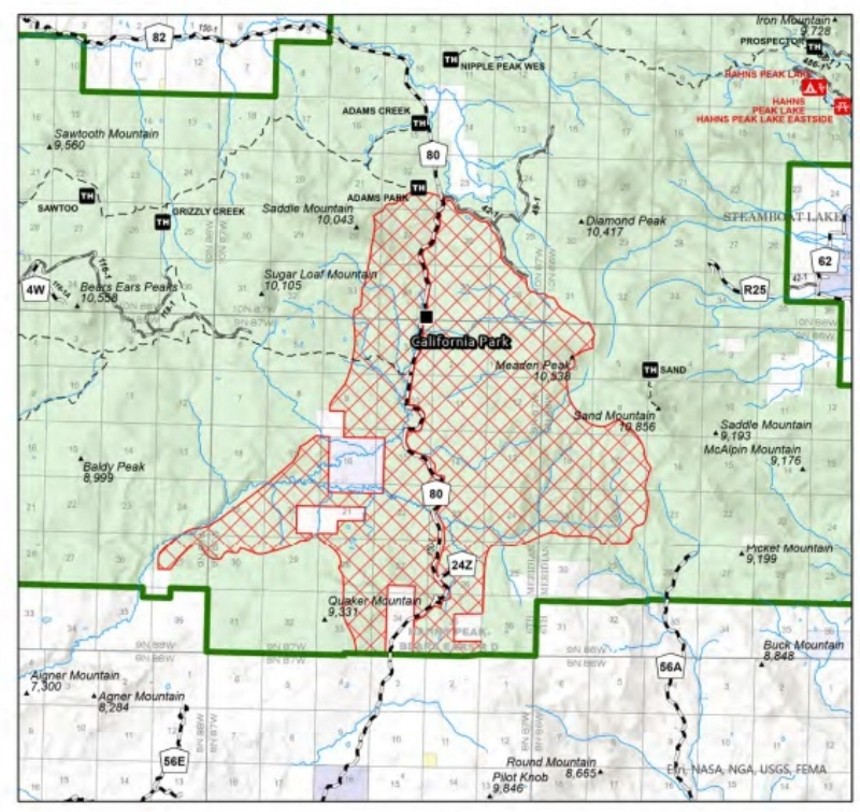 A map of the California Park closure area, seen in red.
U.S. Forest Service
Violation of the closure order "is punishable by a fine of not more than $5,000 for individuals and $10,000 for organizations and/or imprisonment for not more than six months," Markin reveals. "All national forest visitors are reminded that they must obey federal, state and local laws and regulations. The Forest Service takes the enforcement of those laws very seriously."

For those heading to the Adams Park area who aren't part of the Rainbow Family gathering, Markin advises that "especially along Routt County Road 80, please be aware of parked cars along the roadway and pedestrians in and around vehicles or walking along the roadway. Please slow down."

And after July 4, a group of Rainbow Family members has pledged to "stay on-site for several weeks to work on clean-up and rehabilitation," the Forest Service reports.

Click to read more information about the 2022 Rainbow Family gathering.
KEEP WESTWORD FREE... Since we started Westword, it has been defined as the free, independent voice of Denver, and we'd like to keep it that way. With local media under siege, it's more important than ever for us to rally support behind funding our local journalism. You can help by participating in our "I Support" program, allowing us to keep offering readers access to our incisive coverage of local news, food and culture with no paywalls.
Make a one-time donation today for as little as $1.