Op-Ed: The Creation of Revenge Killers 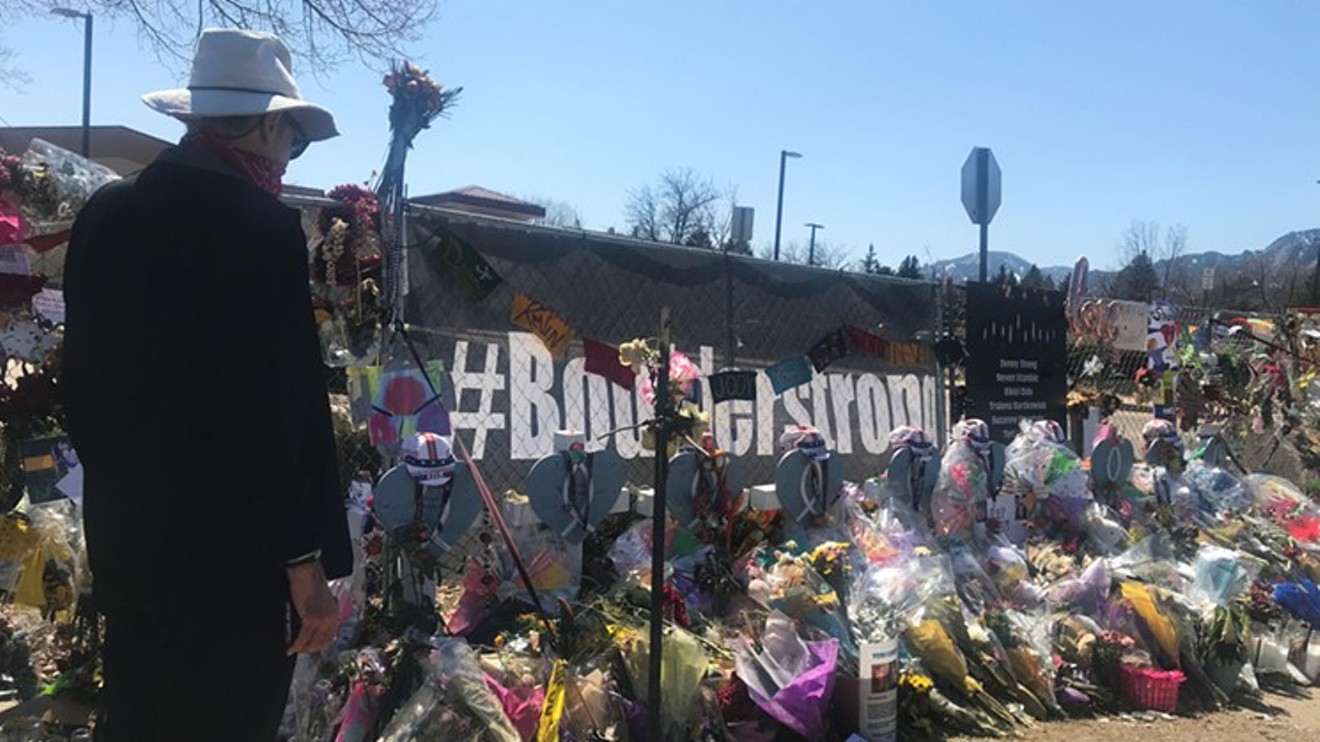 The impromptu shrine outside of the Table Mesa King Soopers store in Boulder. Michael Roberts
After every tragedy, we hear the same question. We hear it over and over again. The parents ask it. The grandparents ask it. The children in the school ask it. And we have never received a real answer. We have never received an answer that makes sense, that fits our understanding of the world. Why? Why? Why?

I lived through the Columbine tragedy as an adult, with my children at the school. My wife and I asked that same question: Why? But we didn’t leave it as a theoretical or rhetorical question. We tried to find the answer.

You can read this and learn, or keep asking the same question and never learn. It has been 22 years since Columbine, and there have been many killings. Isn’t it time to learn the lesson?

I have looked at the high school photo of the Boulder shooter many times. It is a real photo, and his smile is a real smile. It is genuine. So the question becomes: What changed him from that teenager into a killer? What changed him from that young man who was on the wrestling team, to a boy who took martial arts classes, to a boy who was so afraid and angry that he attacked a student in the lunchroom, seemingly unprovoked, to a boy who bought a weapon and decided to kill innocent people?

Here is a possible answer: The five steps that create revenge killers:

Step 1: They are bullied.

"Bullying" is a very specific word. It is the threat of physical violence, but only at a personal level. Two boys have an altercation; one of them is larger and more physical, and he teases or beats up the weaker boy (a very simple example, of course).

Bullying is one-on-one, and is not witnessed by others. It is instilling fear and control into someone, through the acts of the bully.

Step 2: They are humiliated.

When I bully you in front of other people, I have added a new level of pain. I have humiliated you.

My bullying has been witnessed by your friends, co-workers or family. Now you have been humiliated.

You have been physically abused, and embarrassed. You have been humiliated. Now the bullying is public. It is embarrassing. It stings. It is remembered. Everyone knows you are a coward and weak.

Humiliation is a much deeper and longer-lasting fear, and problem. The child, boy or man is embarrassed. They remember it, and it changes them. Some will become suicidal. Some will withdraw from society, and friends, as a defense mechanism.

They will all be changed, and remember it.

Yes, some children will be resilient and let it bounce off of their stronger egos and not be changed, but they will remember it forever. It may teach the stronger ones to not humiliate other children, and it may teach others that humiliating children is acceptable and okay. It is the beginning of pain. The question is, how will the child react to the pain? Will they internalize it, or will they externalize it? Will they become withdrawn, shy, afraid and damaged, or will they respond with violence?

This is the big one. Bullied and humiliated children will respond in many different ways, but hypervigilance will accentuate the response. A humiliated child, who is constantly humiliated, will become sensitive to humiliation.

They will become afraid, and they will notice every single instance of humiliation and bullying, and they will remember it, magnify it and absorb it, until it becomes the driving force in their life. Continued bullying and humiliation will create the state of hypervigilance. Every potential humiliation, or even the hint of it, is listed and categorized by the humiliated student. They see the bully knock a kid down, and they note it. They see girls making fun of a boy, and it is remembered and accentuated. They hear laughter from across the room, and they know the laughter is about them. They know it. They are afraid. They are embarrassed. They have become hypervigilant. Every instance of interaction in a school is a reflection on them, or on the bullies in the school. They accentuate their fear and learn that they are not safe, not protected. This leads to suicides, depression, dropping out, sadness and changes in personality. It can also lead to violence. Since they are being humiliated, and no one is defending them, a few children will decide to be violent and get revenge.

Step 4: They begin the process of violentization.

Discussed in great detail in Lonnie Athens's book The Creation of Dangerous and Violent Criminals, "violentization" is the process that some boys and girls will use to defend themselves. It starts as a simple standing up for yourself, but in subtle ways. Fighting the bully is impossible, so they will dye their hair black, wear dark clothes, wear sunglasses, and start to bully or be physical with other, weaker children. They respond to continued humiliation by humiliating other children. They respond to the fear by creating fear. This reaction will increase and continue to increase, often to dangerous levels.

This process of violentization is what creates criminals and violence. Certainly not in all cases, but it is a major cause. This process requires a mentor, a teacher, who will instruct the hypervigilant and defensive child in ways to act, in how to be tough. In school and revenge shootings, video games can be a mentor. They teach the bullied child how to fight back, with knives and weapons and bombs. And in school and revenge shootings, movies can also be a mentor. They teach violence and violent responses to injustice.  A short list: Death Wish (1974), Blood Father, Natural Born Killers, Kill Bill, The Punisher, Falling Down, Mad Max, 22 Bullets, RoboCop, Death Wish 4, American History X, A History of Violence, Super Dark Times, Scarface, Seven, Collateral, John Wick, John Wick 2, The Equalizer, Shooter, John Wick 3, Vengeance, Death Wish (2018), Carrie, The Brave One, Acts of Vengeance, I Am Wrath, and hundreds and hundreds of other movies. The mentor does not have to be the criminal next door. It can be, and is, the violence in theaters and on television. The violent ones teach the coldness of killing and death. They teach the ease of killing. They teach violence. They are the unfeeling, cold, cruel, impersonal teacher of death. And we ignore it as these children watch and receive instructions.

At some point in the process of violentization, the bullied child makes a decision to be violent. They decide to get revenge. That accounts for the rarity, in general, of revenge shootings: It takes a continued environment of bullying and humiliation, without intervention on the behalf of the bullied child, for the process of violentization to reach the point where the bullied child makes that decision. It takes time for the bullied child to decide to be violent, and more time to get the weapon, so that they can carry out their plans for revenge. They are just living the lessons they have learned in the movies, and on television, and in the violent video games. Their environment is the mentor that teaches them to get revenge, to kill those who have wronged them. 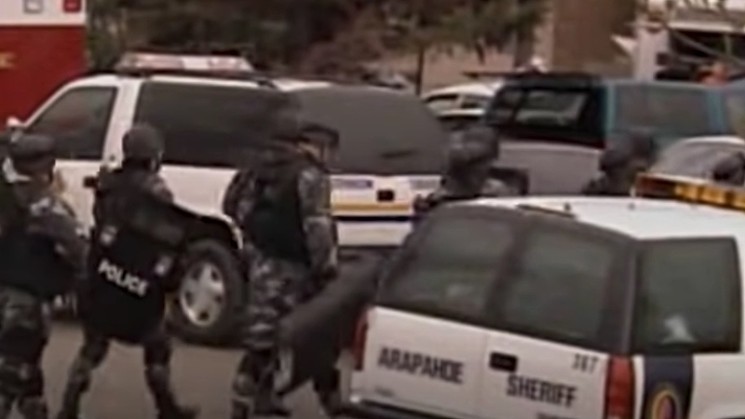 The scene outside Columbine High School on April 20, 1999.
YouTube
Step 5: They decide to be violent.

In some victims, constant humiliation and bullying will create a violent response. Living with fear, living with the awareness that they are being bullied and humiliated, will, in some cases, create a response of violence. If I bully you enough, if I humiliate you enough, you may respond with violence. It is a way of rebuilding your damaged self-image. It is a way of stopping the humiliation. It is a way of stopping the fear, and fear is a great motivator. The wonderful author James Gilligan writes about this in his book Violence. It is profound, and well-documented. In that book, he states very simply that “humiliation creates violence.” Constant humiliation creates a need for justice, a correction of the perceived injustice that the child is living. Constant humiliation creates a need for revenge, and therefore violence. It is the motivator that will cause a humiliated boy, without obvious provocation, to attack another boy in the lunchroom. Do you remember that example?

That is the process. It takes most of those steps, without interference from an outside source, to reach the level of a school shooter or revenge killer.

The humiliation has to be consistent, and sustained. It has to remain uninterrupted, without someone stopping it or defending the humiliated child. It has to remain secret — which, with the “boy code” of never telling anyone, is pretty common. As a bullied child, I am not going to tell the principal or my parents. I might tell my brother, or he might see it. If he does, and does something about it, I may never develop a hypervigilant state, and the process may be interrupted. I will never tell my mother or father. My mother wouldn’t be able to stop it, and my father would tell me to “be a man.” To a bullied boy, that is a hopeless source of protection. The “boy code” gives bullies power and impunity.

One teacher, one school administrator can stop it, by simply being vigilant and watching for abuse. So can one parent. So can one friend. But it has to be acknowledged. It has to be addressed.

Take away the humiliation, and the angry boy will not need to get revenge.

And now, the lesson for revenge killers, written directly to you:

Make a conscious decision to be better than the bullies, to be wiser, to be kind.

Live your life with kindness and be a loving, caring human being.

Randy Brown, a Columbine parent, is the author of The Inside Story of Columbine: Lies. Coverups. Ballistics. Lessons. If you want to understand this concept in more depth, he suggests these additional books: Violence, by James Gilligan; Lost Boys, by James Garbarino; The Creation of Dangerous and Violent Criminals, by Lonnie Athens; Why They Kill, by Richard Rhodes; When a Child Kills, by Paul Mones, and Our Guys by Bernard
Lefkowitz.

Westword frequently publishes op-eds and essays on matters of interest to the Denver community; the opinions in them are those of the authors, not Westword. Have one you'd like to submit? Send it to [email protected], where you can also comment on this piece.