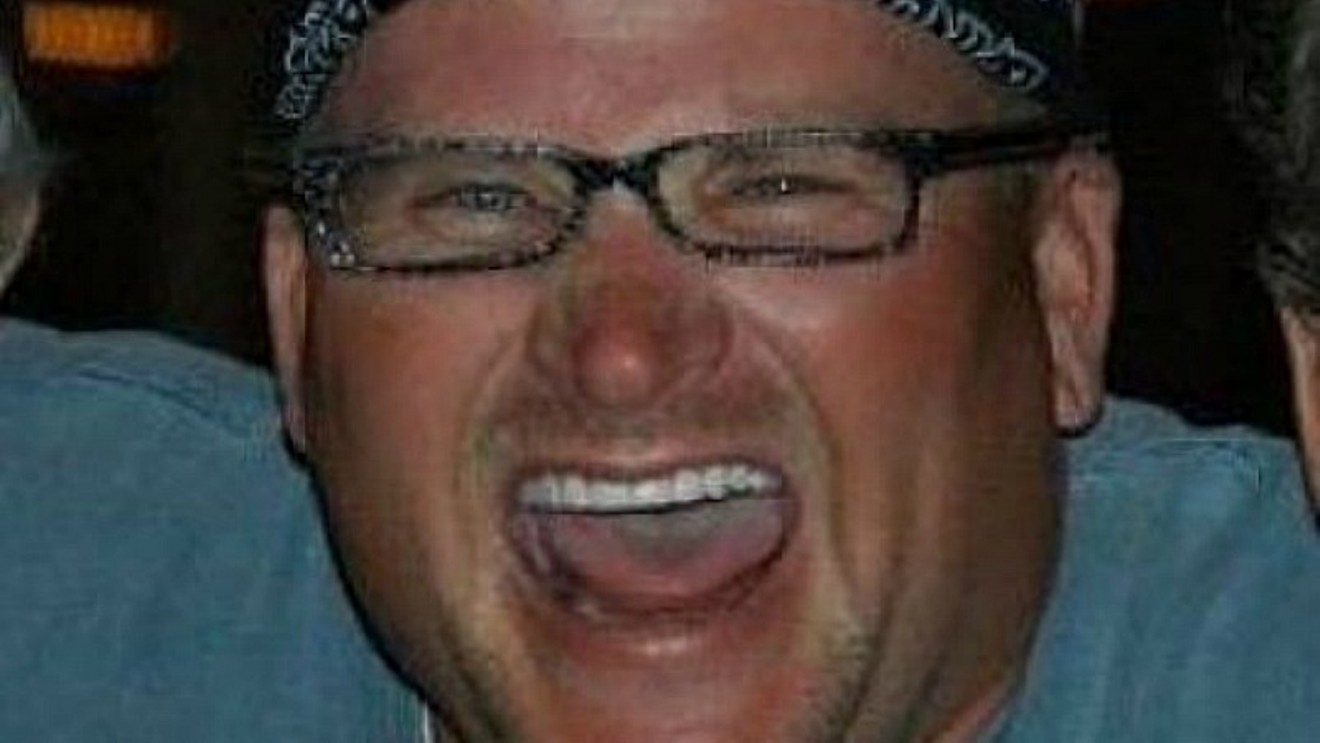 A Facebook photo of Richard Kirk. Facebook
Update: Richard Kirk has been sentenced to thirty years in prison for murdering his wife, Kristine Kirk, nearly three years ago, shortly after he'd consumed a marijuana edible. During the hearing at which this punishment was formalized, Kirk implied that the pot candy had spurred the killing, saying, "I had no idea how it would affect me.... I'm so sorry that I became the monster that I was supposed to protect them from." But a major cannabis business organization maintains that legal marijuana actually reduces crime instead of increasing it.

As noted in our previous coverage, on view below, Richard killed Kristine on April 14, 2014, while she was on the phone with a 911 operator. Afterward, it was revealed that he had eaten a piece of Karma Kandy Orange Ginger, a candy infused with THC, the active ingredient in marijuana. Given that the Denver coroner's office had determined days earlier that a pot cookie had been a factor in the March 2014 death of Wyoming college student Levy Thamba, also known as Levi Thamba Pongi, who died after falling from a Denver hotel balcony, anti-marijuana groups seized on Kristine's death, arguing that edibles were unsafe and could lead to tragedy.

Richard's early February 2017 decision to make a deal with prosecutors — he pleaded guilty to second-degree murder in exchange for the dropping of a first-degree murder beef and a 25- to 30-year stipulated sentence — meant that pot edibles wouldn't be put on trial. However, Kirk's attorneys brought up the topic as a potential mitigating factor during his April 7 sentencing, as did Kirk.

The judge in the case wasn't swayed; the thirty-year sentence was at the top end of the range to which Richard and his defense team had previously agreed. But the Cannabis Business Alliance still objected to any attempt at linkage. 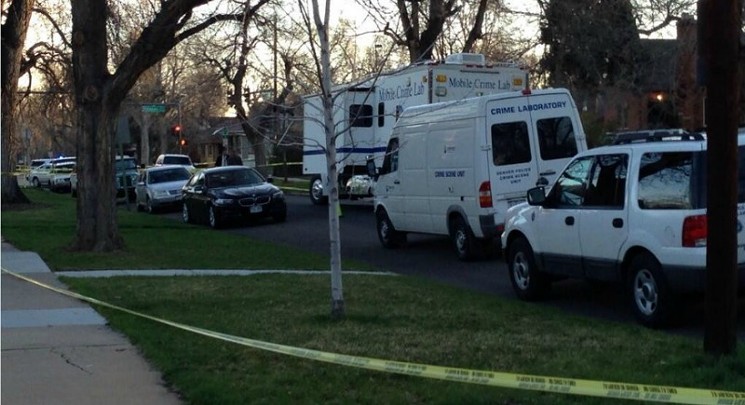 The scene of the crime.
NBC5 file photo
"The Cannabis Business Alliance acknowledges this was a horrific violent crime and our deepest sympathies continue to be with the family and friends that were affected by the tragic death of Kristine Kirk," CBA executive director Kevin Gallagher said in a statement. "The industry is relieved that after years of investigations and mental evaluations that Richard Kirk accepted responsibility for his actions. CBA encourages public safety and consumer responsibility and is an advocate for proper dosing and consumer education, such as the Start Low, Go Slow campaign."

A CBA release went on to emphasize that "the edible reportedly consumed by Richard Kirk prior to committing this horrific crime was properly labeled in accordance with state law and rules in place at the time. As a fledgling industry, it is not unexpected to be under increased scrutiny. However, the fact remains that violent crimes decreased in Denver from 2013 to 2014, and legalizing medical marijuana causes no increase in crime, according to a recent study. In fact, legalized medical pot may reduce some violent crime, including homicide."

Added the CBA: "Cannabis continues to offer a positive medicinal option for patients including veterans suffering from PTSD and children with debilitating conditions such as epilepsy and spastic quadriplegic cerebral palsy. A recent report from the Colorado Department of Public Health and Environment found that marijuana consumption by Colorado high school students has dipped since the state first permitted recreational Cannabis use by adults. The biannual poll also showed the percentage of high school students consuming Cannabis is smaller than the national average among teens. Colorado has experienced a significant economic boost since the legalization of Cannabis, accounting for sizable job growth and tax income for Colorado." 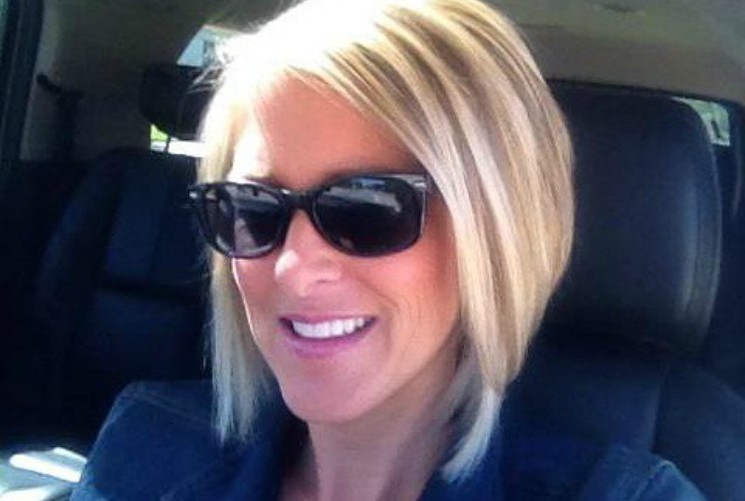 The case was among the biggest of that year in part because Kirk was said to have been under the influence of a marijuana edible at the time of the shooting, and speculation suggested he would claim in court that the slaying resulted from a bad reaction to it. But his guilty plea means that pot edibles won't be put on trial.

As we've reported, a probable-cause statement in the case noted that members of the Denver Police Department were dispatched to the Kirk home, 2112 South St. Paul Street, at 9:32 p.m. on April 14, 2014. Upon their arrival, they discovered Richard Kirk and a woman later identified as Kristine Kirk.

She was lying on the floor with a gunshot wound to the head. At one point, the document maintains, Richard volunteered to an officer "without questioning" that he had killed his wife — and he had done so while she was talking to a 911 operator.

The PC statement subsequently recounts the 911 call as described by a detective who listened to it. Kristine told the dispatcher that Richard "was talking about the end of the world and he wanted her to shoot him."

She added that there was a gun in the residence, but it was kept in a safe. In the meantime, Richard was "hallucinating" and scaring the kids.

Richard Kirk did have a police record, for a DUI offense. However, police say they had never been previously sent to the Kirk home on domestic-violence allegations.

So why did Richard react the way he did? More details emerged in a search warrant affidavit shared below. The document quotes Kristine as telling the dispatcher that her husband had eaten some "marijuana candy." Later, a receipt was found for a purchase at Nutritional Elements dispensary for a pre-rolled joint of Pre-98 Bubba Kush and a piece of Karma Kandy Orange Ginger.

Karma Kandy Orange Ginger.
File photo
The marijuana connection caused an enormous stir, in part because it came during the same month that the Denver coroner's office determined that a pot edible had been a contributing factor in the death of college student Levy Thamba, also known as Levi Thamba Pongi, who died after falling from a hotel balcony.

Reports suggested that Thamba had never tried marijuana before eating part of a cookie from Sweet Grass Kitchen, and when it didn't have an immediate effect, he consumed six times the recommended amount.

Anti-marijuana groups such as Smart Colorado immediately turned the Kirk and Thamba incidents into talking points, arguing that pot edibles were dangerous; pro-cannabis organizations countered with education campaigns designed to help people use such products safely. Hearings related to new regulations about labeling and portion size followed, and the new regs were put into place last year.

The prospect of a Kirk trial couldn't have pleased members of the marijuana industry, since it would have raised the topic again.

For this crime, Kirk will be sentenced to what's described in a Denver District Attorney's Office release as a "definite term of between 25 and thirty years," plus a fine of between $5,000 and $10,000 and five years' worth of mandatory parole upon his release.

In addition, Kirk has consented to the adoption of the couple's three kids by Kristine's parents, Marti and Wayne Kohnke.

Afterward, Kristine's family released the following statement: “We miss Kris every day. We are grateful that this case has been resolved to save us all from the stress of a trial. Thank you to everyone who has supported us through this, the most difficult time of our lives."

Also issuing a comment was Denver District Attorney Beth McCann. "All involved feel this is a fair resolution of a very complicated, tragic case," she's quoted as saying. "The family did not want the case to go to trial given the personal and emotional toll family members have already suffered. Mr. Kirk has accepted responsibility for the murder of his wife, and the range of sentence possibilities will allow the judge and the public to hear any facts in mitigation and aggravation of the situation.”

This last line appears to be an attempt to placate marijuana critics, who'd been hoping that the reputation of pot edibles would be besmirched by a full-blown trial. Instead, Kirk has taken responsibility for his actions rather than pointing the finger of blame at Karma Kandy Orange Ginger. Here's a look at his 2014 booking photo. 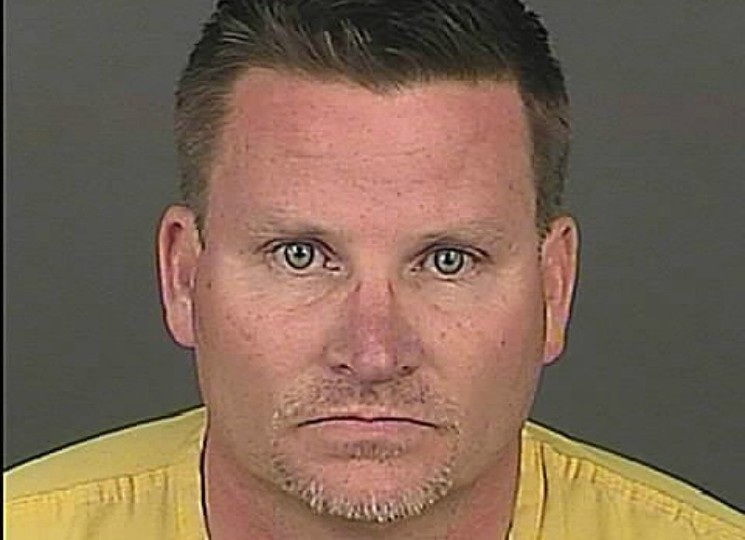 Richard Kirk's booking photo.
Denver District Attorney's Office
KEEP WESTWORD FREE... Since we started Westword, it has been defined as the free, independent voice of Denver, and we'd like to keep it that way. With local media under siege, it's more important than ever for us to rally support behind funding our local journalism. You can help by participating in our "I Support" program, allowing us to keep offering readers access to our incisive coverage of local news, food and culture with no paywalls.
Make a one-time donation today for as little as $1.