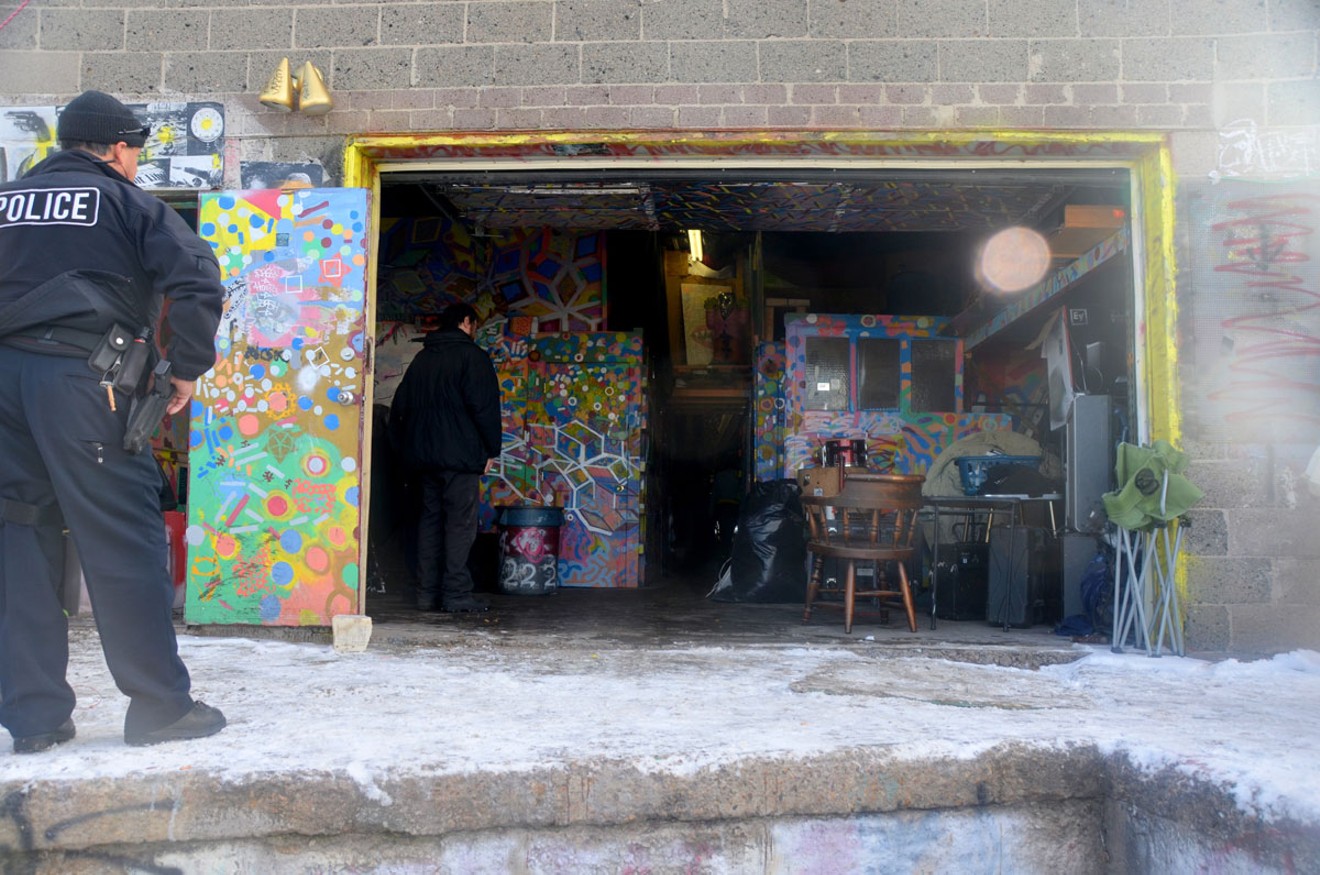 Denver police oversee the artists ousted from Rhinoceropolis. Lindsey Bartlett
Twelve days after the city shut down legendary DIY venues Rhinoceropolis and Glob, citing unsafe conditions and ousting eleven artists who’d been living there, Denver police and fire officials returned to RiNo for another sudden inspection on December 20. Their unexpected appearance prompted an angry e-mail to the city from Jamie Licko, president of the River North Art District, who’d met with the displaced artists and others in the worried DIY community just a few days earlier to come up with a game plan.
“Another surprise check is currently occurring at Juice Church, another RiNo DIY space. Police and fire are currently there. We are waiting to see what happens next,” Licko wrote. “Last week, RiNo sent on our list of requests, the most important of which was an amnesty on checks until we all could have a conversation about how to handle these spaces, and how to ensure we aren’t displacing more people right now. We were told we would be getting correspondence back from the city on this matter last Thursday. We never received anything….”

But now, with this surprise check, the city’s message seemed all too clear.

“I’d like to request a meeting with RiNo, mayor’s office, fire, police and Arts and Venues ASAP,” Licko’s emergency e-mail continued. “We want as much as the City does to get these places up to code, but this is unacceptable.”

Licko got that meeting. Within minutes of her irate e-mail hitting in-boxes around the city, she’d received calls from Denver Fire Chief Eric Tade as well as Brad Buchanan, head of the Department of Community Planning and Development. And at a quickly convened gathering on December 22, “everyone was at the table,” she says, including representatives of the mayor’s office and officials from Arts & Venues and the city’s planning, police and fire departments, along with RiNo Art District boardmembers, property owners and actual artists — some of whom had been evicted from Rhinoceropolis and Glob after the first round of surprise visits on December 8. Since those visits — prompted, according to fire-department officials, by tips that they’re required to investigate rather than any publicity stemming from the Oakland Ghost Ship tragedy (though that publicity could have prompted those tips, whether from opportunistic trouble-makers or concerned neighbors) — members of Denver’s DIY community have been reluctant to talk about their spaces, for fear of attracting more attention and yet more snitching to the city.

Even so, some tipster inspired that surprise check on Juice Church, a DIY music venue at 3400 Lawrence Street. But while Juice Church’s Facebook page has been taken down, the space is still open: This time, RiNo representatives were able to secure a promise from the city that Juice Church could stay open for thirty days while any necessary repairs were made.

And the RiNo Art District isn’t stopping there. It’s setting up a fund that other DIY venues will be able to tap into for repair work that will keep them operational; members of the community, including developers who’ve made RiNo one of the hottest spots in town, have stepped up to offer financial support, Licko says; many responded to any earlier missive she'd sent on behalf of RiNo after the abrupt closures of RiNo and Globe. (Westword gave a last-minute 2016 MasterMind award to the ousted artists, and will deliver the $2,000 honorarium this week.) 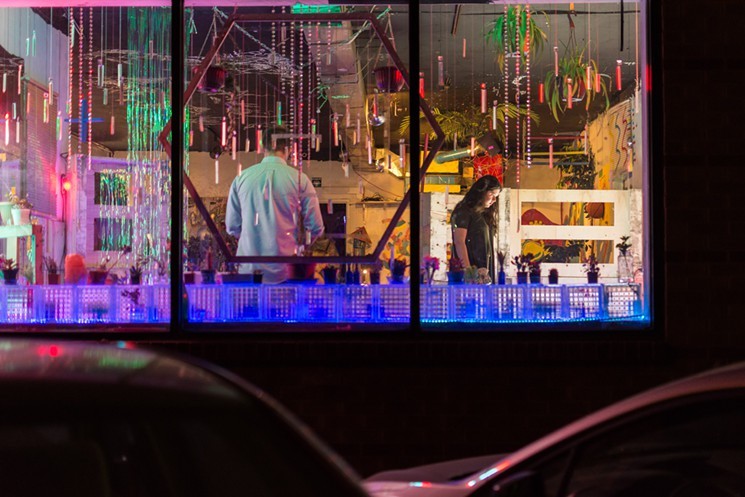 Fantasia 2016 at Rhinoceropolis last fall.
Kenneth Hamblin III
And there are plenty of other businesses that can be tapped for donations, including marijuana companies that have priced old warehouses out of reach for the artists who used to take on the spaces when no one else wanted them. “This would be money that would essentially bridge the gap between where places are now and what they need to be up to code,” explains Licko. But the plan isn’t just to make money available for emergency fixes; she wants to have RiNo representatives and maybe even lawyers go along on city inspections of DIY locations, to make sure that communications are clear and that the venue owners and operators have a chance to make needed repairs without shutting down.

Longer-term, the RiNo Art District might push for zoning changes — not just in RiNo, but across the city — that would allow more than four unrelated people to live together and get around the city’s sky-high rents (think old-school boardinghouses), and also ask for more simplified explanations of Denver’s zoning codes.

Andrea Burns, communications director for the planning department (which sent not just Buchanan, but all of its chief inspectors to the December 22 meeting), says the department is already looking into that since “our code books are hundreds of pages long.” The city’s response to the situation is “very much a work in progress, and there are certain aspects of safety we’re not willing to compromise on, for obvious reasons,” she adds. “Safety is a priority for everybody, but people being displaced should be a last resort.”

At this point, RiNo, which got its start as an art district over a decade ago but recently voted in a business improvement district, is ready to try anything to keep artists in the area. After all, the River North Art District is “where art is made,” according to its slogan. “I told the DIY community, ‘Look, if there was a solution to this, someone would have already done it,’” Licko says. “We need to ensure for the long haul that there is a space and a place for everybody to keep creating.”

The renovated McNichols Building is no DIY arts space.
Arts & Venues
But first, artists need to be assured that Denver, which has a reputation as one of the most creative places in the country, appreciates the people who earned it that designation. Here’s a start: At 5:30 p.m. on Wednesday, January 18, Denver Arts & Venues, the Denver Commission on Cultural Affairs and the planning and fire departments will host Safe Creative Spaces & Artspace Collaboration at the McNichols Building (itself renovated as an arts/events space, but hardly DIY), “a forum for proactively getting information to potential tenants and/or building owners regarding building and fire safety, and how to make creative space safe for occupants.”

Making sure no more surprise inspections occur would be a good start: The city’s announcement of the forum was sent out the day before the visit to Juice Church and Licko’s angry e-mail.

That was just an unhappy coincidence, says Ginger White-Brunetti, deputy director of Arts & Venues, who explains that in the wake of the Rhinoceropolis/Glob closures, the city just wanted to “pick a date and pull something together as soon as we could.” The subsequent action at Juice Church and the December 22 meeting just emphasized how important such a forum could be; she says that organizers are still taking suggestions for what the event should cover. (You can put yours in the comments section.)

“From what I’ve heard from the DIY community, everyone understands there are legitimate concerns about safety,” White-Brunetti adds. “The holistic question of the place of artists in a city has been a holistic question that Arts & Venues has been looking at for some time.”

And if Denver is truly a city that appreciates its artists, now is the time for some real answers.