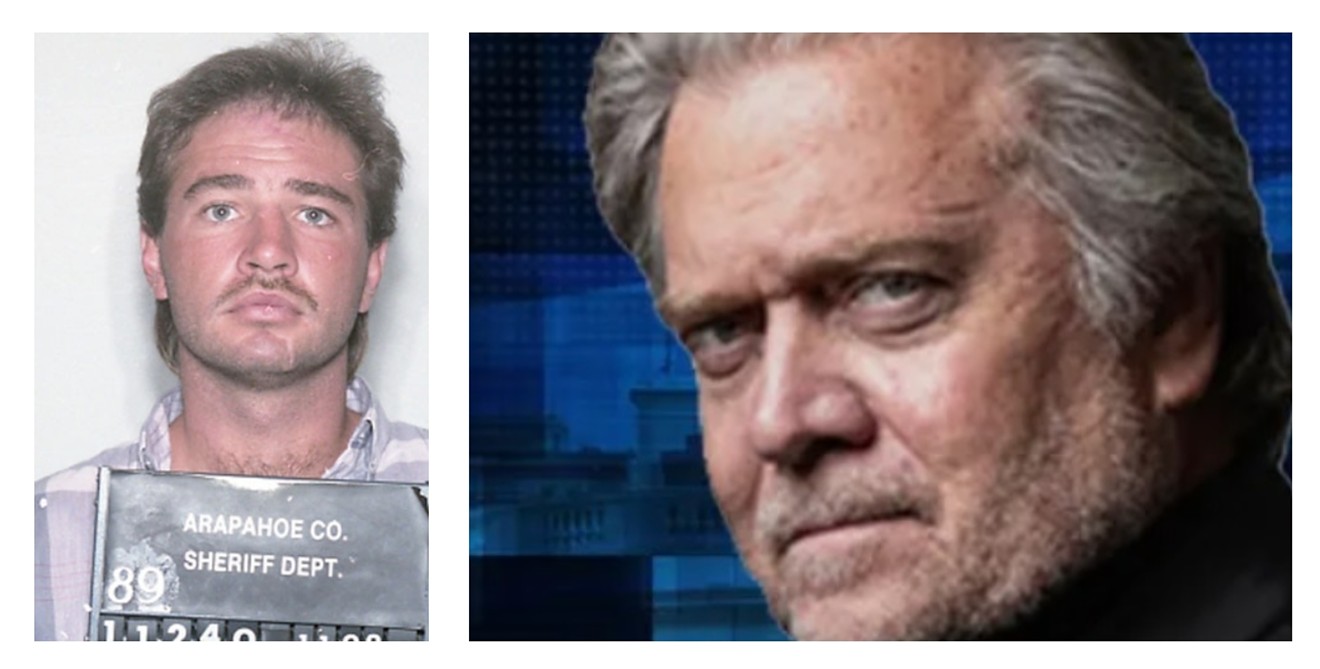 A vintage mug shot of Robert Sigg and a portrait of Steve Bannon on the Real America's Voice website. Arapahoe County Sheriff's Office/Real America's Voice
Robert Sigg is one of Denver's least-known media moguls, and he keeps an extremely low profile. Most of the photos of him online are decades old — among them an Arapahoe County mug shot from a period when he was busy adding to a sizable rap sheet. Even when he had to respond publicly to the furor caused by the 2012 murder of a child committed by his son, Austin Sigg, he did his best to steer clear of the spotlight.

Now, however, Sigg is receiving national attention thanks to a January 24 Washington Post story revealing him as the man who came to the rescue of Steve Bannon, a controversial former advisor to ex-President Donald Trump who is currently defying a congressional subpoena to talk about the 2021 insurrection attempt at the U.S. Capitol. As noted by the Post, Bannon had been effectively "deplatformed" by YouTube and other media services until Sigg's ultra-conservative network, Real America's Voice, came to the rescue by providing him with a forum for The War Room, his daily attack on truth and justice.

Austin Sigg's murder of ten-year-old Jessica Ridgeway, a Westminster girl who vanished on her way to school on October 5, 2012, was shocking in its brutality: Her body was dismembered, with her limbs turning up after her torso was discovered in an Arvada open-space area. Once the seventeen-year-old Sigg was taken into custody — an arrest prompted by a phone call from his mother, Mindy Sigg — reports revealed that he had been studying mortuary science at Arapahoe Community College.

At the time, Sigg responded to his son's arrest with a statement. "First, I would ask for your prayers and support for the Ridgeway family," he began. "There are no words to express the sorrow that I and my family feel for their pain they are suffering. We are devastated by the knowledge that my son, Austin Sigg, has been arrested and will be charged with the murder of their beautiful daughter Jessica. This horrible event is a tragedy for both the families, as well as the community. I ask also for your prayers and support for Austin's mother, whose courageous act...unimaginably painful for any parent...has put this tragedy on the path to resolution. I am hopeful that as the legal process unfolds, the Ridgeway family may come to know peace." 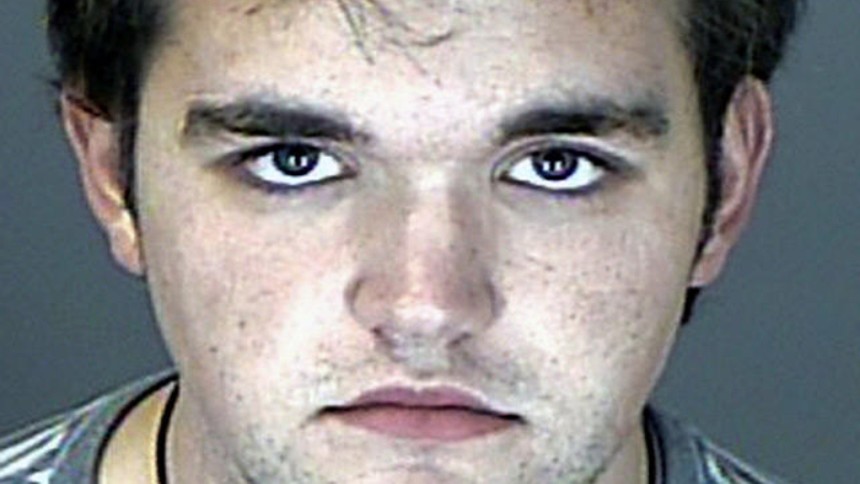 A 2012 booking photo of Austin Sigg.
Jefferson County Sheriff's Office
At the time of the killing, Sigg was the president of Centennial-based Performance One Media — a position that he continues to hold. Today the firm's LinkedIn page calls it an "an executive office company" in a one-line description. But back in 2012, plenty of additional details were included. "We are experts in the consulting, planning, analysis and execution of customized Direct Response television media solutions," the introduction stated. "The industry norms have not proven effective enough for us; so we developed two distinct teams that work together to encompass every aspect of the multi-media industry. This, together with P-One's unique approach to an end-to-end custom media solution that 'blends' Per Inquiry, Media Buys and Interactive advertising, will help to drive down your cost-per-lead while simultaneously supplying critical trending data."

Sigg's own LinkedIn bio hasn't changed in the past ten years. "Rob Sigg has over 23 years of advertising, marketing and television media experience," it reads. "Currently the President of Performance One Media, he leads his team of media experts to consistently find new and innovative methods of driving new business while maintaining unprecedented standards to bolster responses for existing clients. Before launching P-One, Mr. Sigg spent over 8 years with Turner Media Group, which he helped launch from its inception. As President of TMG, Rob's natural execution-oriented style made for huge growth when he took them from a 3-man media agency to a 100+ employee power-broker within the media landscape. He pioneered, and was instrumental in, the development of TMG as the exclusive rep-firm for all media sales through Dish Networks. At its height, after bringing them to a revenue growth of 250MM, Rob made his exit in 2004. In the years prior to TMG, Rob utilized his true entrepreneurial spirit and his insight to recognize how 'all-the-pieces-fit-together' to own and operate a number of businesses in the real estate, construction, spa and salon disciplines."

Left out of this summary were Sigg's many brushes with the law. As documented by Fox31, his criminal history dates back to 1983 and includes more than a dozen arrests on charges ranging from DUI to selling and distributing drugs, burglary and assault, assault and battery, resisting/obstructing arrest, domestic violence, driving under the influence of drugs and being a habitual traffic offender. He was convicted of mortgage fraud in 2006 for his involvement in what the Denver Business Journal summarized as "a scheme to obtain hundreds of millions of dollars in bogus mortgages and multi-million-dollar lines of credit." And the Post estimates that Sigg racked up more than $235,000 in unpaid federal taxes between 1997 and 2010.

This background didn't prevent Performance One Media from adding assets. Its current networks include Weather Nation; the Pursuit Channel, which focuses on outdoor sports such as hunting; and ICTV, a "television platform for content creators, infomercial shoppers and television shoppers." But its flagship effort is Real America's Voice, which took off after Bannon joined the team.

"More than two years later, the arrangement has paid off for both men," the Post contends. "Sigg used War Room as a springboard for an expanded network of conservative hosts — bringing him the commercial opportunity he sought." As a result, the Post notes, Bannon's show is currently available in "as many as eight million homes hooked up to Dish satellite television, many in rural, conservative areas without reliable cable coverage."

Bannon was once the executive chairman of Breitbart News, a significant far-right media purveyor. But in an interview with the Post, he argued that Real America's Voice is "five times more powerful" than his former outlet. "They get it out everywhere," he said. Speaking with the Post, Bannon also shrugged off Sigg's criminal record, referring to him and his business partners as "scrappers from the cable business."

Austin Sigg was sentenced to life in prison in 2013. According to the Post, two of Robert Sigg's adult children work for Performance One Media. Sigg has not responded to an interview request from Westword .
KEEP WESTWORD FREE... Since we started Westword, it has been defined as the free, independent voice of Denver, and we'd like to keep it that way. With local media under siege, it's more important than ever for us to rally support behind funding our local journalism. You can help by participating in our "I Support" program, allowing us to keep offering readers access to our incisive coverage of local news, food and culture with no paywalls.
Make a one-time donation today for as little as $1.