Mike Coffman's Newest Challenger: "My Wife Thinks I'm an Idiot for Doing This"

Roger Edwards is trying to unseat Mike Coffman. Courtesy of Roger Edwards
A new, unique challenger has jumped into the crowded race for Republican Congressman Mike Coffman's seat. Roger Edwards owns a small local trucking company and will challenge the five-term Aurora congressman in the Republican primary. He takes issue with the reasons that Coffman challenges President Donald Trump, argues Roy Moore should have his day in court, and promises to vote conservative every time. A newbie to politics, Edwards calls Republican gubernatorial candidate Tom Tancredo "a friend" and says he felt compelled to join the race after Coffman's vote earlier this year against a repeal of Obamacare.

Westword spoke with Edwards to learn more about issues important to him and how he plans to win an immigrant-heavy district that voted for Hillary Clinton by nearly 9 percentage points.

Westword: What compelled you to run for this race?

Roger Edwards: I've been thinking about it for a long time. And over that period of time, I just became more disenchanted with Mike Coffman. I guess, maybe, I have a concept of government that people should do what they say they're going to do. And there've been too many cases with Mike, and I guess other politicians, they don't have any core. They don't have any core beliefs. Their core beliefs are determined by who the donor is, or what the latest poll is, or whether they need to look good to some particular group or not. That's not the way I operate. That's not the way I live my life. If I tell you I'm going to do something, I'm going to do the very best I can to make sure it gets done.

If elected, what would you do?

Well, you've got Mike Coffman for seven, eight years telling his constituents he's going to vote to repeal and replace Obamacare, and when the vote comes down to it, he says, 'No, I'm not going to do that.' That's a real problem. That was the final straw. In my view, the government is corrupt. All you have to do is listen to the stuff that comes out of Washington, D.C.

Of course you know all about this stuff with Roy Moore. Whatever happened to a man being innocent until proven guilty? What's going on right now is the Republicans, and virtually all I've heard of, have said he should step down. Is that really justice? Have we gone to the place where we're now a mob, and whatever the mob wants is what they get? Shouldn't it be that Roy Moore should have his day in court and that all of that be [determined] in court, whether he was guilty or not? If you give in to that kind of mentality, where a few important people are going to say bad things about you and make you feel bad, then what kind of person are you to start with? The idea that Cory Gardner would call for him to step down is totally out of place. [Moore] might be guilty. He might be a serial rapist. He might be a pedophile. He might be a mass murderer. I don't know, and neither do any of those guys. So let's give the man his day in court.

Wouldn't the argument be that the severity of these allegations...

They're allegations. I can make allegations. We can make all kinds of allegations. But you cannot run a society by having the loudest, crudest, meanest voices out there to have the ones rule the day. You have to stand up against that kind of stuff. We have become a nation afraid of hurting someone's feelings.

Has anyone advised you on this race?

I have a fellow who's been around politics. He lived in Texas for a while. He's kind of advising me on some different things. He has a whole different personality [from mine].

Do you have Bannon's contact information? If you've got it, I could use it. Tom Tancredo is my friend. 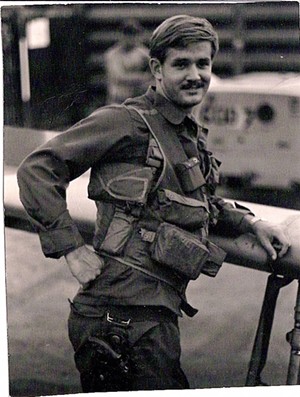 Edwards in the '70s.
Courtesy of Roger Edwards
Is there one thing you really want to see changed in Washington that might have led you to run?

What I want to see is a change in the Sixth District, and then we'll worry about what goes on in Washington. But what is particularly distressing... have you followed Mike Coffman very much? Have you listened to him speak? When he speaks, he will tell you how difficult it is to get elected in his district [as a Republican]. He'll tell you the Hispanic community, the Korean community, the Ethiopian community, the Muslim community, the Jewish community, the black community, the white community, the red, purple... he'll tell you about all of those communities. I don't think that's a way to bring people together. To me, that identity politics divides people on issues that they probably wouldn't naturally be divided on. What is the problem about talking with a Hispanic person about America? Why aren't they Americans who happen to be Hispanic? Or Americans who happen to be Muslim? All of those people, in my mind, have the same goals, the same desires. I don't think you're going to find any one of those groups that [would say], 'No, I'm not interested in safety for my family because I'm a Korean.' Or, 'No, I'm not really interested in equal opportunity because I'm a Muslim.' Everybody has those kinds of goals. They want to be safe, they want to have opportunity, they care for their family. When you start dividing them into groups, you do them a disservice.

What's your campaign plan, and when do you plan to start campaigning?

Well, I've already started campaigning. The media is kind of helpful in getting out who I am. I've been involved in politics, but mainly on the sideline. I've supported people, I've helped people. At one time, back in Missouri, I had a county committee position. But in Missouri it was more of a ceremonial type of position; I didn't really do much. But I was still identified as a Republican. I've been around it for a while. In 2014, I went to assemblies. In 2016, I went to the assemblies. I was elected as a delegate for this, that and such and so. I'm a precinct-committee man.

The statistics in this district don't favor Republicans. Should you win the primary, how do you plan to win over independents?

Well there's about 5 percent more Democrats than there are Republicans. The undecided people are always the ones who decide the election. The Democratic party has become so extreme, it's not the party of John F. Kennedy or Harry Truman. It's the party of Bernie Sanders. And people of my age [67], while they may belong to a local union, or they may register as a Democrat, they're not with Bernie.

This is also a community with many immigrants. How do you plan to win over at least a share of those communities' votes?

If you were to make it to the general election and defeat Coffman but lose to a Democrat, wouldn’t you be worried about damaging the Republican Party by taking away a seat in a primary challenge?

You’ve got to be kidding me. Mike Coffman is beat right now.

Just from his own policy conduct that when you talk to a lot of Republicans, what good is it to vote these Republicans in that don’t get anything done? The leadership has created a giant stain on their brand. Mike Coffman has created a stain on his brand. The only chance that the Republicans have in my mind to keep this seat is either to find somebody who is not Mike Coffman and hope that they can win. If Mike Coffman is the nominee, he loses just because he’s lost the base. He hasn’t lost them, he’s made them mad. I’ve talked to these people, and they are mad.

In the election last year, I voted Libertarian. What good is it to reward the same behavior that you have been getting? What will change? How will Mike Coffman change if I go ahead and decide to vote for him and put him back in for another two years? I don’t see any chance of that happening.

Why would you make the best candidate to represent the Sixth?

Well I might not make the best. There’s probably a lot of people out there that should’ve been doing this before me. Other upstanding Republican political people in the county, or counties, that could’ve been in this position but aren’t. They’re not in there because they’ve got too much to lose. Either they’re on a progression to move up the ladder of increasing responsibility in political office, or they’ve already got an office or they don’t want to go up against Mike Coffman because he’s Mike Coffman, or they don’t want to be associated with the losing Republican Party. Who knows.

I have always stepped forward when there’s a challenge. People tell me no, that’s what really gets me.

Did people tell you no?

No. Well, my wife thinks I’m an idiot for doing this. We’ve talked about it. But she sees the passion that I have. We’ve talked about it a lot, and she said, 'You know what, I’m going to give this over to God, and if he can use you, then that’s what it’ll be.' If I get beat, I’ll run trucks some more.

So you felt compelled to do this?

I think that’s a good characterization. I’m a Vietnam veteran, and sometimes you do things you don’t want to do because it’s the right thing to do.

Any final thoughts? A final pitch?

Politics are kind of a smarmy thing. You’re not sure you’re clean after you do it. I would devote the utmost of my energy in supporting the constituents of the Sixth District. I would always listen to what people have to say. Do you like me or not? You might call me a son of a bitch, and I’ve been called that stuff before. That’s not a problem. If we can discuss things on a civil basis, I’ll be glad to talk to you no matter what your view is. But you need to understand if I’m elected, I’m going to vote a conservative agenda. If there’s something in that agenda that you don’t agree with, and you can convince me that’s not the right way to go, I’ll be glad to support you.