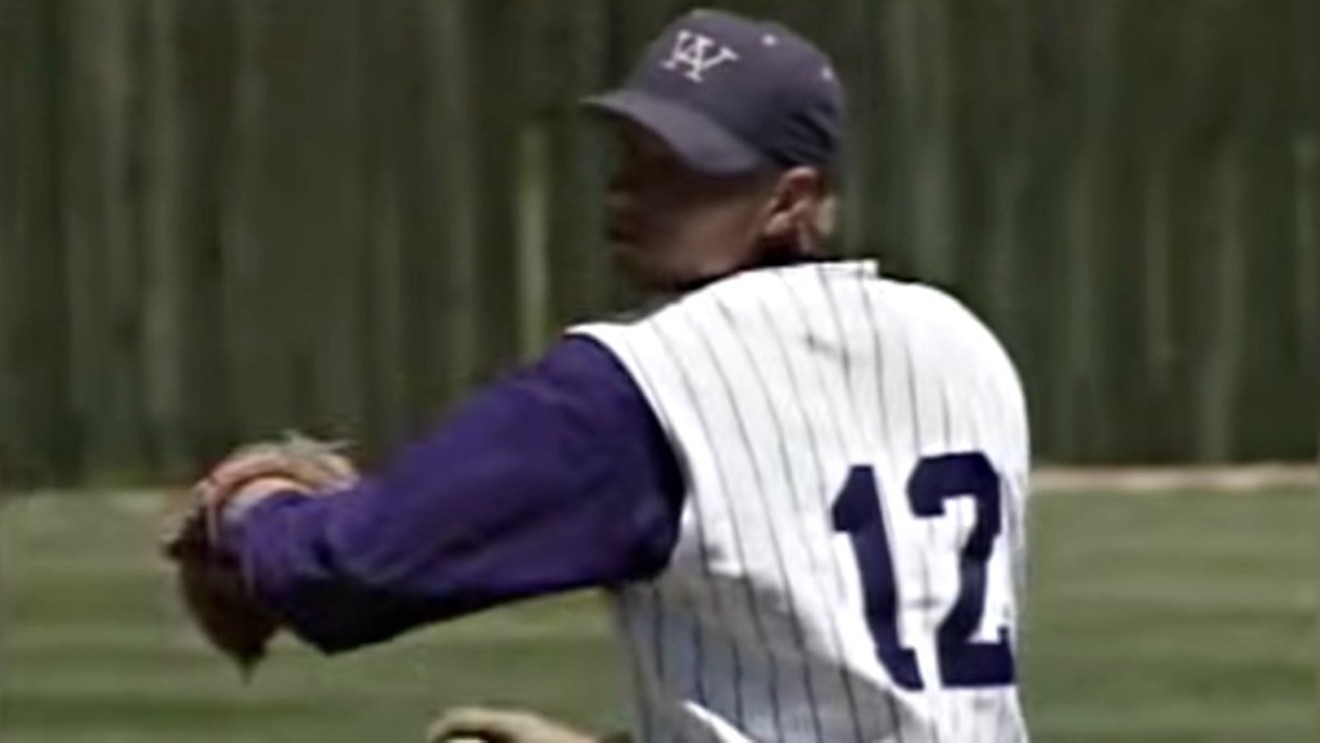 Roy Halladay during his Arvada West days, as seen in a video shown at his 2015 induction into the Colorado Sports Hall of Fame. YouTube
News that two-time Cy Young Award-winning pitcher Roy Halladay had died on Tuesday, November 7, after a plane crash into the Gulf of Mexico shook the Major League Baseball community. After all, Halladay, who retired in 2013 after sixteen years of sparkling play for the Toronto Blue Jays and the Philadelphia Phillies, was widely considered a lock for the MLB Hall of Fame, and his reputation as a human being was just as impressive.

But Halladay's death was felt with particular shock in the Denver area, where he was born forty years ago and first came to the attention of scouts as a hurler for Arvada West High School.

He graduated from Arvada West in 1995.

Numerous tributes to Halladay popped up on Arvada West's Facebook and Twitter accounts over the course of yesterday, including this photo of a display at the school in his honor.

While Halladay was a big deal across the league, he never forgot his home town, and when the Colorado Sports Hall of Fame named him for induction in 2015, he returned to accept the accolade.

Here's a video of that moment, featuring footage from throughout his career and an acceptance speech marked by grace and humility.


Unsurprisingly, we included Halladay on our 2013 list of the ten best athletes to be born in Colorado.

The Halladay item in the post reads: "Halladay's from Denver, and his hometown Colorado Rockies sure as hell could use him — not that the legendarily cheap outfit would ever pay his freight. He is quite simply one of the most dominant pitchers in Major League Baseball, although it took a while for some folks to realize it, since he spent the first chunk of his career hurling for the Toronto Blue Jays. Now he's part of the Philadelphia Phillies, a perennial contender. His personal record book includes eight All-Star Game appearances, two Cy Young awards (given to the best pitcher in his league) and, in 2010, both a perfect game and a no-hitter in the playoffs against the Cincinnati Reds. When he retires, we expect he'll be a first-ballot Hall of Famer."

Such an enshrinement can't happen until 2019, but when the big day comes, it will be decidedly bittersweet, since Halladay won't be able to accept it in person. But the accomplishment will further burnish a legend that won't be dimmed by his exceedingly premature passing.