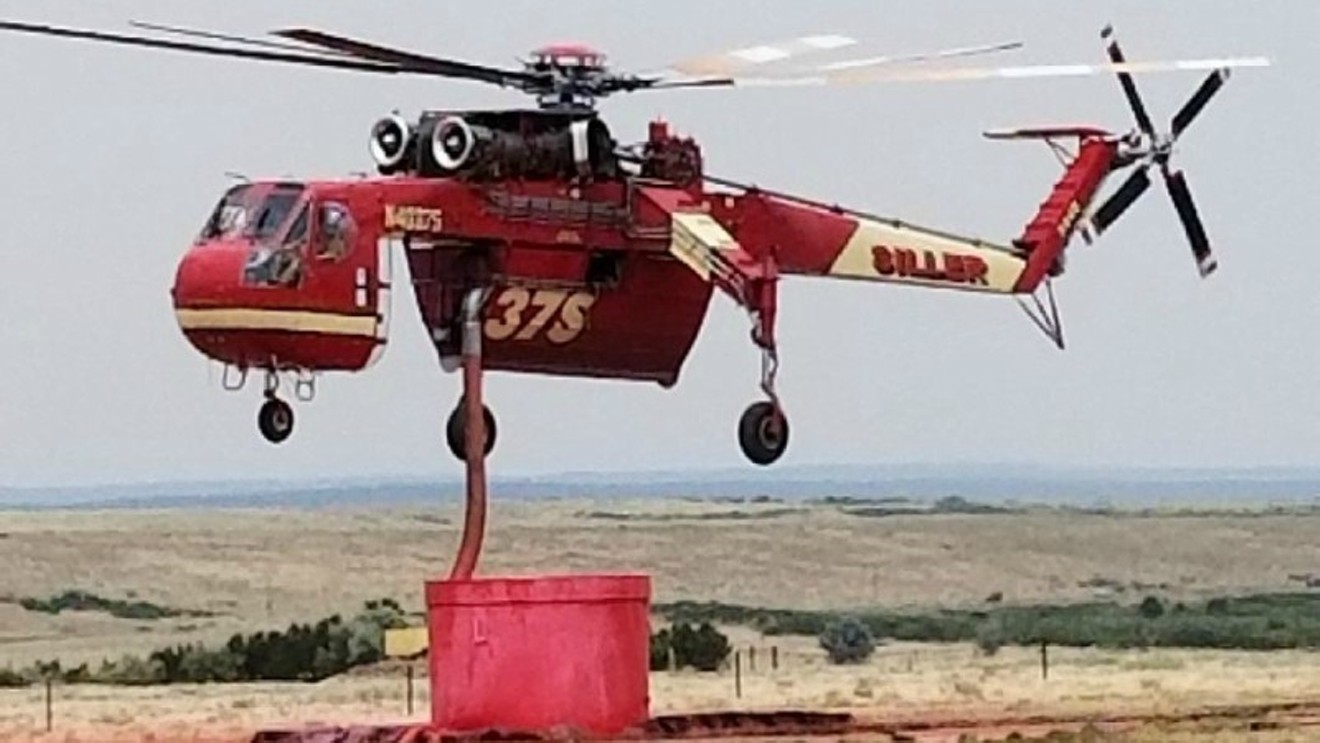 A "sky crane" prepares for a water drop on the Spring Creek fire. InciWeb
The Spring Creek fire in Costilla County, allegedly started on June 27 five miles east of Fort Garland by 52-year-old Danish immigrant Jesper Joergensen, surpassed the 100,000-acre mark, growing by nearly 8,000 acres over a 24-hour period. Moreover, the number of structures destroyed by the blaze now stands at 132. But the news as of early July 6 isn't entirely bad. The fire has gone from 5 percent to 35 percent contained, increasing hope that the estimate of total containment by month's end isn't a pipe dream.

At this time yesterday, the acreage estimate stood at 95,739. The most recent update, posted at 9:31 p.m. on July 5, moves that number to 103,657, leaving it in third place among Colorado's largest-ever wildfires.

Formerly known as the Spring fire, the blaze is currently being managed by the National Wildfire Coordinating Group, a federal agency that's regularly updating the fight on the InciWeb page. At present, 1,444 people were engaged in battling the conflagration, which is being fueled by pinyon, juniper, sage, Gambel oak, Ponderosa pine and mixed conifer, both dead and alive. 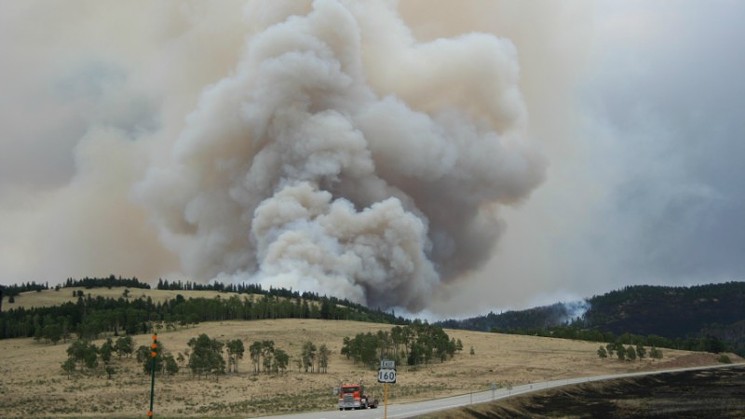 The caption on this photograph shared on the Spring Creek Fire InciWeb page reads: "Column building north of Div D July 3, 2018."
InciWeb
The latest summary of the fire's progress starts like so: "Overall fire activity is expected to be less than previous days, however, fire will remain active in the heavier fuels as the day heats up. There could be spotting up to three-quarters of a mile with higher wind gusts, and outflow winds from passing thunderstorms could push the fire in any direction."

The account adds: "Yesterday evening [July 4], fire moved west across the small area of uncontained fireline on the north side of Division D. Crews are currently putting fireline around this approximately twenty-acre area. There is potential for spotting south of Highway 160 today. Firefighters are monitoring this area closely, cooling hotspots and performing point protection."

As for the weather forecast on the 6th, there are both pluses and minuses.

Positives include predictions for slightly lower temperatures, with highs in the low 80s. Also anticipated is incoming moisture — scattered showers and thunderstorms, mainly after 1 p.m.

Unfortunately, the rain has led to a flash-flood watch in the areas affected by the fire. Moreover, winds will be brisk, with east-to-southwest breezes of 8-13 miles per hour expected to gust up to 25 miles per hour. 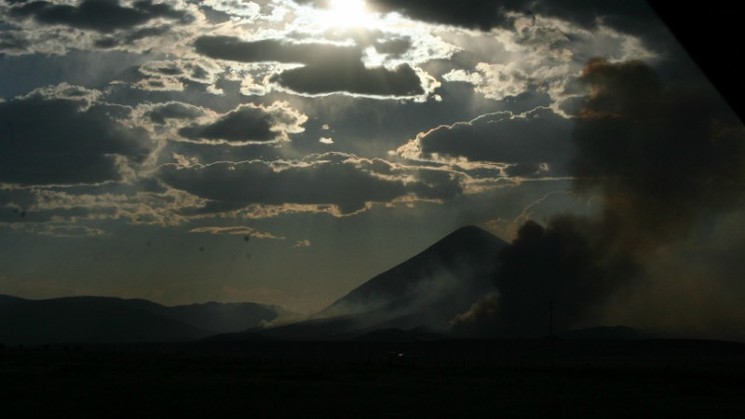 This InciWeb photo's caption reads: "Mt. Mestas on July 2, 2018."
InciWeb
In the meantime, more information has emerged about the man accused of providing the Spring Creek fire's initial spark.

Joergensen has two active Facebook pages. The first boasts a single post from September 2012 — a graphic that reads, "You May Say I'm a Dreamer." On it, his home is listed as Colorado Springs. However, his second Facebook page, registered to "Jesper Hjulmann Jørgensen," identifies him as a resident of Fort Garland, and it was very active until recently.

The most recent post was shared at 3:23 a.m. on June 26, the day before the Spring fire started. It reads: "'Someone' (ex GF) has been spreading a rumour about me — claiming that I've been poisoned to die (which I don't believe that I have been). I'm gonna go see a doctor this week and check for everything. If I have been poisoned, then I have been assassinated...and the only obvious suspect is my ex GF."

Accompanying this text is a photo of singer Alanis Morissette as she looked in the 1990s. 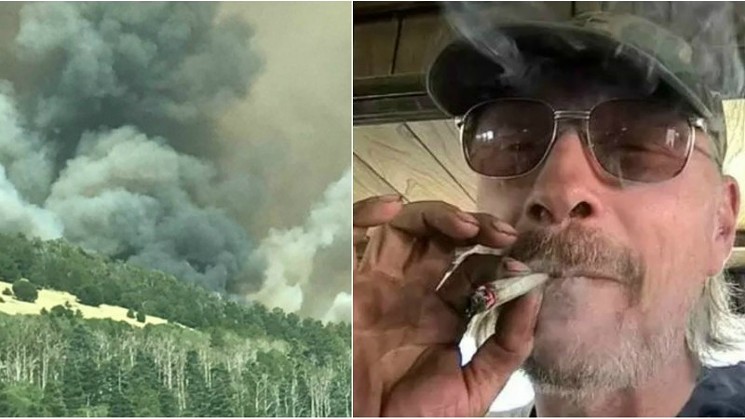 Jesper Joergensen, seen in a Facebook photo at right, has been arrested for allegedly starting the Spring Fire in Costilla County.
Colorado Department of Transportation/Facebook
The signature on the Facebook page includes a nickname for Joergensen: "Diamond Nug." He's said to come from the Danish city of Holbæk and to be working as a self-employed prospector.

The intro to the page reads, "Need to be governed? Yes? Insane! No? Oppressed! #AnBar — mineral and metal backed. #Anarchy2018."

This theme is enforced by memes such as one showing stacks of skulls and the slogan, "Never Fucking Forget: Government Kills."

Such themes are echoed by additional posts tracked down by Heavy.com, including a photo of several tin cans captioned, "It's future targets for practice — they double as a mountain man wind charm, but now your son's got me thinking about getting it trip-wired." 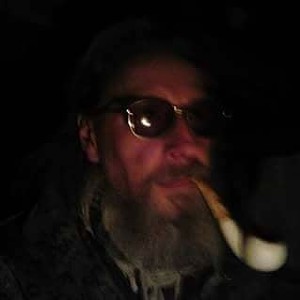 Still, what's been most interesting to the conservative media is Joergensen's immigration status, or lack thereof. The headline on a Breitbart post reads, "Illegal Alien Arrested for Allegedly Starting Colorado Wildfire." And indeed, Immigration and Customs Enforcement (ICE) reportedly placed a detainer hold on Joergensen because the visa he used to enter the United States has expired.

The arrest affidavit for Joergensen reveals how he came to the attention of authorities in the first place. At about 1:30 p.m. on June 27, Costilla County Sheriff's Office deputies are said to have received reports of a fire in the vicinity of Forbes Park. They subsequently encountered Joergensen, who was driving away from the area.

When asked for identification, he flashed his Danish passport before telling the deputies a story whose details allegedly shifted. He's quoted as initially saying that he'd been burning trash near a camper where he'd been living, then insisted that he was grilling in a permanent fire pit. 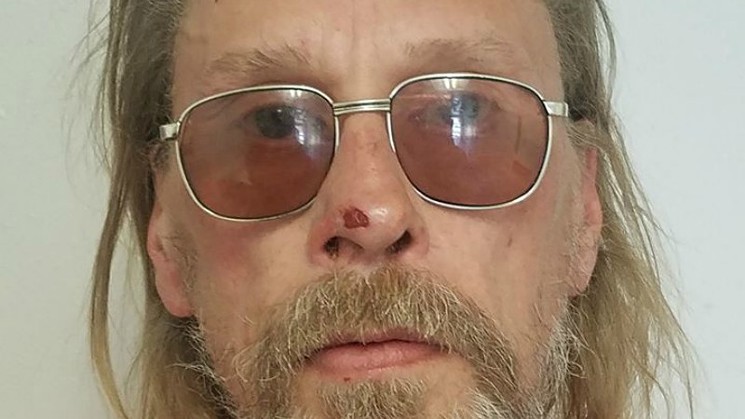 Jesper Joergensen's booking photo.
Costilla County Sheriff's Office
During a later interview, the affidavit goes on, Joergensen said he'd made a fire in the pit on the morning of June 26. Afterward, he covered the pit to snuff out the fire, and when he checked it again that afternoon, he saw no smoke. When he awoke in his camper around noon on the 27th, however, he recalled smelling smoke and seeing flames twenty feet or so from the pit.

He said he tried but failed to smother the flames with a blanket, injuring himself in the process; the report confirms that he had burns on his arm and chest, among other places.

Thus far, there have been no reports of other people hurt or killed by the fire. But the number of destroyed structures speaks to the power of this long-running natural disaster

Update: This post was updated on July 2, July 3, July 5 and July 6 with new details about the fire and Jesper Joergensen.
KEEP WESTWORD FREE... Since we started Westword, it has been defined as the free, independent voice of Denver, and we'd like to keep it that way. With local media under siege, it's more important than ever for us to rally support behind funding our local journalism. You can help by participating in our "I Support" program, allowing us to keep offering readers access to our incisive coverage of local news, food and culture with no paywalls.
Make a one-time donation today for as little as $1.