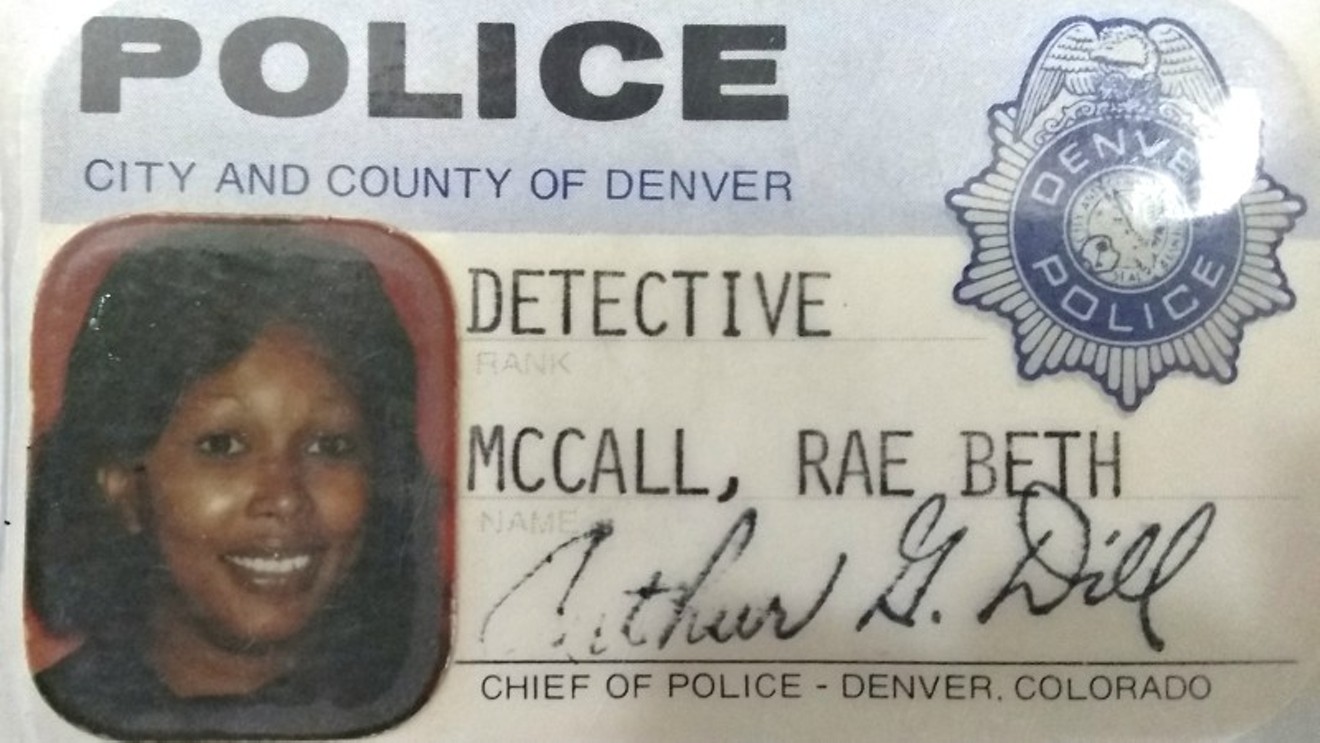 Rae Hunn's Denver Police Department identification card, issued under her maiden name, Rae McCall. Courtesy of Rae Hunn
Rae Hunn was the second-ever black woman hired to serve as a police officer in the city of Denver, coming aboard in 1973, and the first to work as an undercover vice and narcotics detective. But although she experienced plenty of racism and sexism after breaking this ground, she ultimately left the Denver Police Department over what she describes as dirty dealing that resulted in a guilty man escaping punishment because of political connections and an abusive white cop receiving a free pass after brutalizing a black man.

"I experienced corruption," says Hunn, who worked at the DPD under her maiden name, Rae McCall. "And that's why I'm telling this story."

Hunn's new book, Inside Out: The Final Straw, shares many of the themes at the center of Black Klansman, a memoir by former Colorado Springs police detective Ron Stallings that was turned into the Oscar-winning 2018 Spike Lee film BlacKkKlansman. But her status as both a person of color and a female adds another dimension to her tale.

Born in Denver circa 1943, Hunn was raised in a household that paid attention to current events. "My father had been a committee man," she recalls. "He always took me to meetings and, along with my mother, passed out sample ballots. Most of the black kids I grew up with did the same. I was always active in politics and was involved with the Committee on Greater Opportunity along with Wilma and Wellington Webb. It was a small black population back then and everybody knew each other. It was just a way of life."

Her path changed in the early 1970s thanks to a conversation with Armedia Gordon, her best friend and another Denver police ceiling-buster: Gordon was the first black woman ever appointed to serve as a DPD division chief.

According to Hunn, "Armedia and I would talk all the time, and one day, she showed me an ad in the paper and said, 'They're hiring police women.' At first, I said no, because I knew they weren't going to hire any black women. But little did I know that Carol Hogue had already contacted the ACLU."

The American Civil Liberties Union was prepared to sue the DPD based on the department's race and gender policies. At the time, Hunn points out, the Denver force "had thirteen women, but they were clerks: front desk, that sort of stuff. But the lawsuit called for the city to hire more women and more minorities — and they had to work in the same capacity as men."

In the end, Hunn joined Hogue and Laura Tinnin in the complaint, which was settled before going to court. Hogue was hired in 1972, followed the next year by Hunn, with Gordon and Tinnin, who would become Denver's first black female homicide detective, joining up in 1974. But despite having to threaten a lawsuit to even be considered for a position, getting hired proved to be the easy part.

"We're talking about the early 1970s, and racism was very high, especially here in Denver," Hunn stresses. "I was the only female in a class of 43 recruits, and some of the instructors were really ugly to me and other blacks — but more so to me because I was a woman. The vulgar language from the white men: I never heard a black man talk to a woman like that. And there was no locker room for me. I had to change in the lady's restroom. But because I had to sue, I just had to take everything." 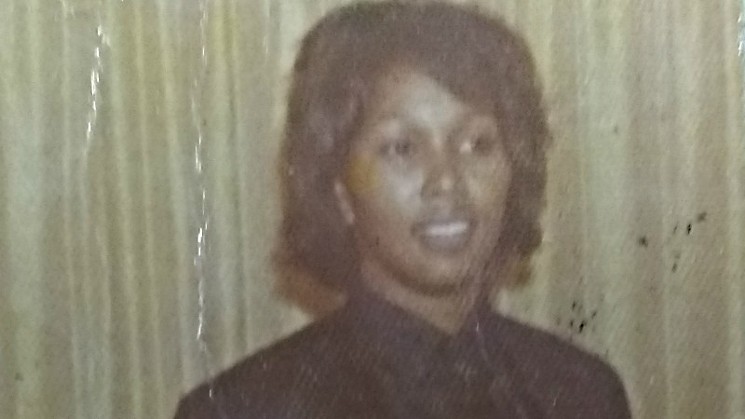 Rae Hunn during her days with the Denver Police Department.
Courtesy of Rae Hunn
Even after passing through the police academy and earning an assignment in District 1, "things were very hard for me. One of my training officers, a white guy, was such a racist and so angry that he was assigned to work with me. That day, he drove downtown and parked the car, and as I was opening my door, he said, 'No, you stay here,' and he took the radio out of the car and went inside somewhere. I was a rookie — I'd only been there for a few weeks — so I didn't say anything. And he was in there for an hour or maybe even two. He was gone so long a patrol car for the downtown area came by two or three times, and the patrol officers reported him to my sergeant, who chewed him out. That was dangerous for me. I was in the car with no keys, no radio, no access to any help if I should need it."

Still, Hunn stuck it out, in part because she realized "that somebody else would be coming up behind me who needed that job. I thought, I'm going to pave the way. But it was rough pavement."

Some of the things she saw opened her eyes to injustices built into the system. "One time I went on a raid, and the guy whose case it was said there was supposed to be a large quantity of cocaine at the house. After we hit the house, the uniformed officers who assisted tore up this beautiful home — just made a mess of it. But they didn't find anything, and as we were leaving, we heard the detective on the case was planting some cocaine he'd gotten from the evidence room."

On another occasion, Hunn responded to a high-speed chase, and by the time she arrived on the scene, "the cops were beating the suspect while he was down and handcuffed — and a sergeant was there kicking and beating him, too. What do you say when you see a sergeant doing the same thing as the officers were doing?"

These episodes were bad enough — but for Hunn, the most serious of all involved "a place called the Dahlia Lounge in the Park Hill area. There was a bar next to a bowling alley, a restaurant that had excellent food. It was in a shopping center where most of the other businesses were abandoned, but the owner of the property was using the restaurant for gambling and drugs and running numbers."

During a raid on the eatery, "I saw a white officer knee an old black man in the groin. All of the officers saw it, but I was the only one who spoke up and told the truth — and my boss, the head of vice and narcotics, wanted me to change my story. I said, 'I've already made my statement. I'm not changing my story.' But they kept after me, saying, 'Everybody else told a different story' — even the two black guys on my team who were on the raid. It was like 1,400 police officers came down on me like white on rice."

To add insult to injury, the owner of the lounge escaped punishment because, Hunn says, "he had all the politicians in his pocket." Suddenly, the case file simply vanished and he was able to walk away. And no discipline was meted out to the police officer, either.

That tore it for Hunn. "I had two children at that time. They were young and they needed me — and I didn't need to keep a job where politicians were being paid off. So I wrote up a letter of resignation and left."

The year was 1979, and after parting company with the police department, Hunn moved to Georgia and opened up an ice cream store before entering the mortgage industry as a loan officer, processor and foreclosure analyst. She held the latter gig for 35 years, then returned to Denver in 2009 to care for her mother, who'd become ill. Upon her return to Colorado, she went back to notes about her time as a detective she'd set aside decades ago and put together and self-published Inside Out.

The Denver Police Department is a different place today than it was when Hunn was in uniform; as of earlier this year, there were 141 black officers in the department, around a quarter of them female. But she continues to see some of the same dynamics at play as during her time in law enforcement. She was especially distressed upon hearing that Officer Leslie Branch-Wise, to whom Denver Mayor Michael Hancock sent inappropriate texts during her 2011-2012 security detail, said during Hancock's campaign for a third term that she'd left his name out of a $75,000 settlement agreement because she'd been told the City would nix the deal otherwise. "Where's her integrity?" she asks, adding, "I didn't change my statement."

Working as a Denver police detective was "an interesting job, and we've come a long way," she acknowledges. "But now I look at politics very differently than I did before."
KEEP WESTWORD FREE... Since we started Westword, it has been defined as the free, independent voice of Denver, and we'd like to keep it that way. With local media under siege, it's more important than ever for us to rally support behind funding our local journalism. You can help by participating in our "I Support" program, allowing us to keep offering readers access to our incisive coverage of local news, food and culture with no paywalls.
Make a one-time donation today for as little as $1.