Teammates Hunter Donnelly, Braylin Scott Try to Out-Douchebag Each Other

Hunter Donnelly and Braylin Scott. Larimer County Sheriff's Office
Hunter Donnelly, a now former member of the Colorado State Rams, has been both an accused perpetrator of crime and a victim of one in recent weeks. He was dismissed from the team after an arrest for allegedly violating a protection order involving a former girlfriend. But he also had thousands in bling stolen from him, reportedly by a teammate, Braylin Scott, who, according to law enforcers, tried to sell the stuff on Craigslist.

The result is a douchebag-dueling Schmuck of the Week bonanza, as well as another embarrassment for the CSU Rams. Earlier this year, Rams recruit Nicho Garcia received Schmuck of the Week honors for allegedly punching out a guy who had the unmitigated gall to ask that he stop urinating next to him outside their apartment complex.

Donnelly didn't have a spotless record prior to signing with CSU last year. The Loveland Reporter-Herald reveals that he pleaded guilty to aggravated assault in 2015 while still a high school student in Arlington, Texas.

So following Donnelly's April 19 arrest on the protection-order beef (a suspected offense supplemented by a domestic-violence enhancement), Rams coach Mike Bobo had little choice but to bring the hammer down hard, chucking him off the team and canceling his financial aid. 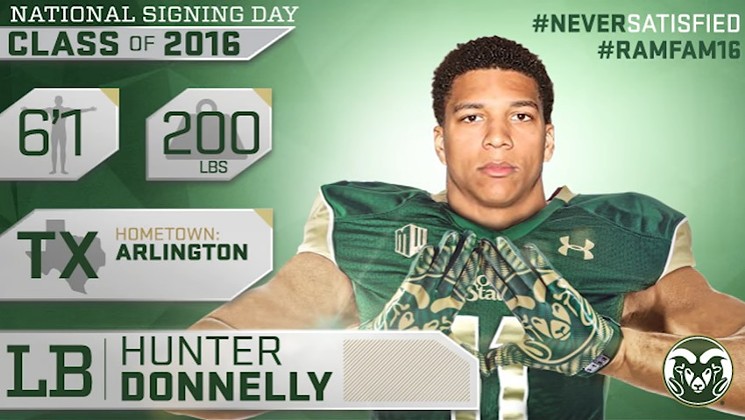 Hunter Donnelly as seen in a video celebrating his CSU commitment.
Colorado State Rams via YouTube
Presumably Bobo didn't know at the time that five days earlier, on April 14, Donnelly had reported the theft of a Rolex watch worth $20,000 and four diamond bracelets valued at $2,000 apiece to the CSU Police Department.

And three days before that, Scott's arrest report notes, he'd also told the cops about another Rolex that was apparently swiped from his locker at Moby Arena, the Rams' home stadium.

Naturally, the jewelry was supposed to be for a girlfriend — but we don't know if that GF was the one he'd been ordered not to see.

Later on the 14th, Donnelly reached out to the CSU authorities again, this time to say that he'd found the items — on Craigslist, where a post listed them for sale.

A screen capture from a video touting Braylin Scott's 2015 commitment to the CSU Rams.
Colorado State Rams via YouTube
The officer investigating the case responded to the Craigslist ad and subsequently arranged to meet the seller outside Moby Arena. The person who showed up was Scott, who had the boxes and the bracelets in his car's cup holder.

Given that the evidence against Scott included surveillance footage that showed him entering his dorm using Donnelly's key card, Bobo had to act again.

In a statement released after Scott's May 10 arrest, he said, "We have been monitoring the situation involving Braylin Scott since first becoming aware of it at the time of the incident. I was concerned enough about the details I had learned that I made the decision to suspend him from all team activities at that time, based on preliminary information. He remains suspended from the program, and we will continue to monitor the legal proceedings."

Bobo can't be thrilled at the prospect of losing Scott, who led the Rams with three interceptions last season. But before he feels too sorry for himself, maybe he should look in the mirror. After all, he's recruited three 2017 Schmucks of the Week — and it's only May.