The Ten Most Spectacular Snowstorms in Denver

Snow day! (Maybe.) Vaquero Cooper at Flickr
Denver and much of the Front Range are gearing up for what’s predicted to be a major snowstorm this weekend, one that could measure snowfall in feet, not just inches; some of the state is already under a Winter Storm Warming from the National Weather Service.

Take a break from watching the weather reports and counting those leftover rolls of hoarded toilet paper, and revisit some of Denver's real record-setting storms — you know, the ones that convince the rest of America that we don’t have 300-plus days of sunshine a year and that our streets are the same cold, slushy, road-sludge ice rinks that they have in the upper Midwest.

This sign: newer than the 1883 blizzard.
David at Flickr
10. January 29-31, 1883
The first month of 1883 went out in a white blur here in Denver, with 19.3 inches falling over a few very cold days. This is the earliest date in the top ten, though that probably has something to do with when people began keeping records. This particular record was set only 25 years after Denver was founded, and only weeks after Thomas Edison installed the first electric lighting system in New Jersey. It’s a pretty good bet that a footand a half of snow was tougher to handle back then.

9. December 20-21, 2006
The most recent date on the list of the top ten Denver snowstorms was the pre-Christmas 2006 blizzard. The snowfall measured 20.7 inches, and completely screwed holiday travelers not only here in Colorado, but across the country, as the domino effect of airline cancellations kicked in. Hundreds of motorists had to be rescued from roadsides around the metro area, and drifting became an issue. But the main problem was the tangle at DIA, and not for the last time. 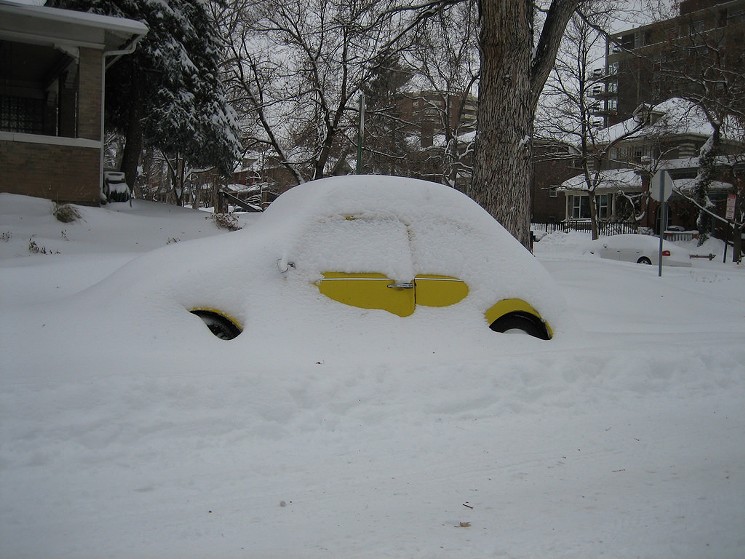 The elusive snow beetle.
Nick Nunns at Flickr
8. November 26-27, 1983
On Thanksgiving, you’re supposed to go over the river and through the wood to grandmother’s house, right? The only way you were going to do that on Thanksgiving 1983 was if you actually had a sleigh, because the 21.5 inches that fell kept you from traveling in almost anything else. What’s worse (and rare for Denver!) was that the snow stuck around for more than two months, refusing to fully melt. Ah, 1983: When Alaska came to Denver for Turkey Day and refused to leave.

7. October 24-25, 1997
Still-shiny-new Denver International Airport got hit hard by the October 1997 snowstorm, when the all-weather airport was completely shut down, stranding over 4,000 passengers with 21.9 inches of snowfall. This, of course, was nearly twenty years before the Westin Hotel opened, so marooned would-be travelers did the best they could, sleeping where they could find space, with purses for pillows and coats for blankets and a list of rightful complaints a mile long.

6. October 20-23, 1906
Over four days in 1906, 22.7 inches of snow fell along the Front Range, and newspapers on the coasts reported that the monster storm had taken down telegraph lines and completely isolated cities like Denver. In 1906, this was a big deal. The Queen City of the Plains essentially became The Shining’s Overlook Hotel, only for real, minus the ax-wielding Jack Nicholson. As far as we know, at least.

Nostalgia should not extend to pooping in a small shack.
Lee Coursey at Flickr
5. April 23, 1885
Twenty-three inches fell in a single day back in 1885, which sounds like a long time ago, and was: The Dow Jones had just been introduced, Good Housekeeping magazine debuted as a brand-new publication, and the Statue of Liberty was still a year away from standing in New York Harbor. Here in Denver, citizens were shoveling paths out to their outhouses.

4. December 24, 1982
It wasn’t just a White Christmas back in 1982 — it was a really fucking White Christmas. Luckily, tons of kids were just getting Atari systems (with Pac-Man, Pitfall and E.T. cartridges — so, awesome, more awesome, and seriously disappointing), so it was okay…at least as long as the house still had power.

Their grandparents started this snowball back in ’46.
Kamyar Adl at Flickr
3. November 2-4, 1946
World War II had just come to a close, the post-war economy was just beginning to swing upward, and Denver got 30.4 inches of snow, covering the streets and preventing the town's streetcars — then at the height of their use as methods of mass transit — from taking anyone pretty much anywhere. Old-timers in town will tell you that this snow was one of the clearest memories of their childhood: The world was fresh and new, and the only fighting left to do was done with snowballs.

2. March 17-19, 2003
This was a big one: 31.8 inches of wet, heavy snow fell over a few spring days and just refused to stop. Club Vinyl’s roof collapsed, the snow tore a hole in DIA’s white tent, and heavy loads of white stuff took down branches and sheds and committed acts of frigid violence all over the metro area before finally winding down. Residents took to cross-country skiing to get to the store for supplies, even as Denver worked hard to restore power to over 135,000 of its residents. If you were here, you have a story.

Ma says not to get your knickers wet.
simpleinsomnia at Flickr
1. December 1-5, 1913
The biggest snowfall in Denver’s recorded history measured 45.7 inches, and even though the storm hit over a century ago, the stories live on. Aside from the usual issues of heat (residents were warned to guard and conservatively mete out their coal reserves) and transportation (the roads were piled high and impassable), one of the biggest issues was where to put all the snow being scooped up in the cleanup. It was the snow of the century — and so far, the one to beat in this century, too.

This story has been updated from the original that was published in January 2017...we haven't seen a really whopping snowstorm since then....
KEEP WESTWORD FREE... Since we started Westword, it has been defined as the free, independent voice of Denver, and we'd like to keep it that way. With local media under siege, it's more important than ever for us to rally support behind funding our local journalism. You can help by participating in our "I Support" program, allowing us to keep offering readers access to our incisive coverage of local news, food and culture with no paywalls.
Make a one-time donation today for as little as $1.