The controversial ICE detention facility in Aurora will be the scene of a protest on September 20. Anthony Camera
When Lisa Tran first heard about the background of Tony Pham, the new interim head of Immigration and Customs Enforcement, she says her mind was blown.

"It feels like a total sellout. It feels like he completely lost his identity as a Vietnamese refugee," says Tran, a 29-year-old resident of Aurora, whose father came to the United States as a refugee in the aftermath of the Vietnam War.

Pham also came to the U.S. as a refugee, after the fall of Saigon.

Like Tran, immigrants and children of refugees in the metro area were shocked by the Trump administration's appointment of Pham to head ICE last month. And they plan to rally outside the ICE detention facility in Aurora, at 3130 Oakland Street, on September 20 to show their dissatisfaction.

According to his bio on the ICE website, Pham and his family came to the United States as refugees in 1975. After spending ten years here, members of the Pham family became U.S. citizens.

Pham went to law school, became a lawyer in 1999 and spent much of his early career as a state and federal prosecutor. He then moved into handling civil rights litigation in the city attorney's office for Richmond, Virginia, before transitioning to a job as in-house counsel for a sheriff who ran a jail of about 1,200 detainees. After that, Pham became superintendent of a jail in Virginia. Before becoming the acting head of ICE, Pham served as ICE's principal legal advisor.

Pham views his career as a government lawyer as a way of giving back to America for providing a safe haven in the 1970s. “When we came to this nation seeking hope and opportunity as refugees, I signed a promissory note to America. I owe a debt for my freedoms and opportunities which must be repaid. I do so by committing to my community as a dutiful citizen and to pass along my experiences and opportunities to serve those around me," Pham says on the ICE website.

But with his work as the head of the federal agency that detains both asylum seekers and undocumented immigrants, Pham has betrayed them, fellow refugees charge. 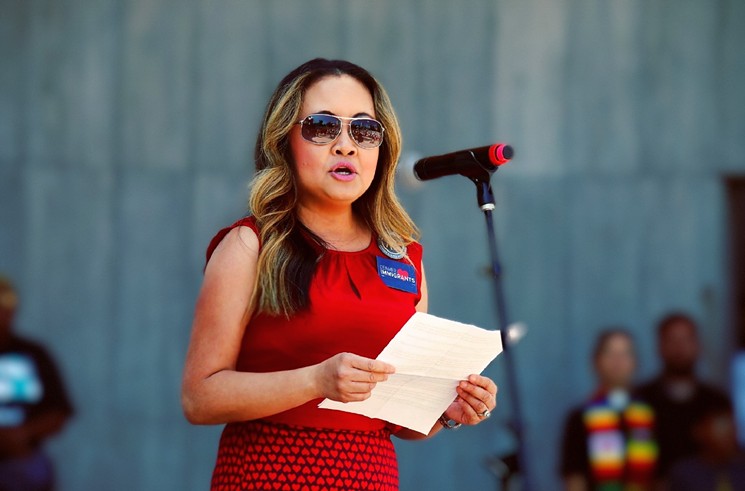 Nga Vuong-Sandoval is feeling shocked by the appointment of Tony Pham as acting head of ICE.
Alex Kolesnikov, courtesy of Nga Vuong-Sandoval
If Vietnamese refugees had fled their homeland today rather than decades ago, Pham would "undoubtedly be denied access," Vuong-Sandoval says. "It's unfortunate that someone who has gone through these horrific and traumatic experiences can turn their back on those who are seeking the same opportunity."

With similar protests against Pham popping up across the nation, Tanya Roman, a spokesperson for ICE, says that the agency "fully respects the constitutional rights of all people to peacefully express their opinions. That being said, ICE remains committed to performing its immigration enforcement mission consistent with federal law and agency policy.”

Protests against ICE facilities and officials in Colorado are typically led by Latino immigrant leaders. But they're praising the Asian immigrant and refugee community for stepping up to organize this event.

"They just feel really supported and really encouraged that folks from the Vietnamese refugee community feel so strongly about this," says Jennifer Piper of the American Friends Service Committee. "It means a lot to see new people speaking up and taking the time to plan this event."

Those organizing the September 20 protest also want to highlight the fact that the Trump administration is reneging on an agreement struck between the U.S. and Vietnam in 2008 that essentially stated the U.S. would not deport Vietnamese individuals living in the country who had criminal convictions, as long as they had come to the U.S. prior to 1995.

The action on September 20 will run from 1 to 3 p.m. and will highlight speakers of Chinese, Taiwanese, Vietnamese and Mexican descent talking about their own immigrant and refugee experiences, and expressing concern about the appointment of Pham. Organizers will encourage attendees to sign postcards to send to Colorado legislators to show support for ICE detainees.

Find more information about the event here.
KEEP WESTWORD FREE... Since we started Westword, it has been defined as the free, independent voice of Denver, and we'd like to keep it that way. With local media under siege, it's more important than ever for us to rally support behind funding our local journalism. You can help by participating in our "I Support" program, allowing us to keep offering readers access to our incisive coverage of local news, food and culture with no paywalls.
Make a one-time donation today for as little as $1.