Bennet, who hosted the gathering at the Denver Elections Division offices, where, as López put it, "the magic happens," set the tone with his opening remarks. "The most important election of our lives is in 78 days," he said, "and it's going to take place under conditions that none of us would have anticipated or expected: a major economic crisis and a major public-health crisis — and, on top of that, daily attacks and disinformation from the President of the United States."

The latter are nothing new, Bennet stressed. He accused Trump and Senate Majority Leader Mitch McConnell of blocking every effort to make it easier for people to register, vote and "defend our democracy against hostile actors." Dismissing Trump's attacks on mail-in voting as "false claims," Bennet argued that Americans are more likely to either win the lottery or be struck by lightning than to fraudulently cast a ballot. He supported this contention by citing a study by the conservative Heritage Foundation, which determined that mail-in voting fraud represented infinitely less than 1 percent of all votes cast — "virtually zero," he said.

Along the way, Bennet mentioned that Colorado's other U.S. Senator, Cory Gardner, won his seat in the state's first full vote-by-mail election back in 2014. At a recent online fundraiser, Gardner praised Colorado's approach to voting but ripped the notion of it being put in place nationally.

During his time at the podium, Polis emphasized that voting by mail has been Colorado's default since 2013, yet "if you don't want to vote by mail, you certainly don't have to. You can go to a polling location for early voting or on election day." He also touted Colorado's rules allowing same-day voter registration, as well as pre-registration for seventeen-year-olds who'll turn eighteen by election day. "Our state has really set the gold standard," Polis said. "We're second in the nation for voter turnout, and a fully engaged, participating citizenry is something Democrat and Republican officials alike are grateful for."

Colorado Secretary of State Jena Griswold, backed by Governor Jared Polis, blasted President Donald Trump in her remarks.
colorado.gov
Polis detailed some of the protections built into the Colorado system to prevent fraud, including a bipartisan team that looks at every signature to be certain it was signed by the correct voter. Approximately .0027 percent of ballots were flagged over signatures last time around, he noted, and many of them were cured when it was determined that the changes were benign — such as scrawls that looked different because the voter had suffered a stroke.

Next up was Griswold, who said that during this year's primary in Colorado, 99.3 percent of all ballots were cast using the mail or at drop-off boxes. In her view, this methodology helps protect people like her mother, a nurse who's been treating people with the novel coronavirus. Additionally, Colorado's mail-in ballot system has increased participation generally by around 9 percent, with sizable boosts for demographics such as black, Latinx and young voters.

As for Trump, Griswold stressed, "We cannot allow him to tilt this election in his favor, and I will do everything in my power to stop him. We're considering all options."

This last theme was reinforced by Weiser. After referencing language in the U.S. Constitution mandating that states are in charge of elections and calling Colorado's approach "the envy of our nation," he made it clear that he would take legal action against the Trump administration if he determined that it was attempting to interfere with this state's balloting in an illegal manner. 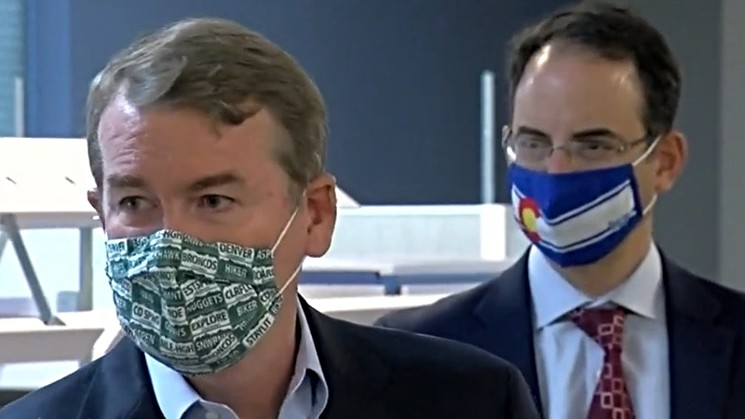 Senator Michael Bennet, with Phil Weiser in the background, hosted the event.
colorado.gov
Like Griswold, López also shared an anecdote about a family member; he recalled how his grandfather, a veteran who was injured in World War II, would limp to the polling place because voting was so important to him. He warned "folks whose intent it is to try to interfere in our elections, whether you be foreign or domestic," that "you're going to find nothing but a brick wall of ballot security and people who are election judges working every single day to make sure that our votes count — to make sure you have the right to vote. And we will make sure you have that right to vote."

López also reminded Coloradans that despite its name, mail-in voting doesn't have to involve postage stamps: "We have 38 drop boxes in the City and County of Denver. I like to say we were social distancing before it was cool."

In response to a question, Weiser revealed that he has been "working with colleagues in different states, evaluating our best legal options." He added, "I'd very much like to live in a world where we could take for granted" that the federal government isn't trying to disenfranchise voters — but since that's not the case, he's got other options.

"This is an American issue, not a partisan issue," Weiser said. "I don't relish the opportunity to sue the federal government. I will make every effort to tell the federal government to follow the law. But if we conclude that they aren't, we will take action."
KEEP WESTWORD FREE... Since we started Westword, it has been defined as the free, independent voice of Denver, and we'd like to keep it that way. With local media under siege, it's more important than ever for us to rally support behind funding our local journalism. You can help by participating in our "I Support" program, allowing us to keep offering readers access to our incisive coverage of local news, food and culture with no paywalls.
Make a one-time donation today for as little as $1.