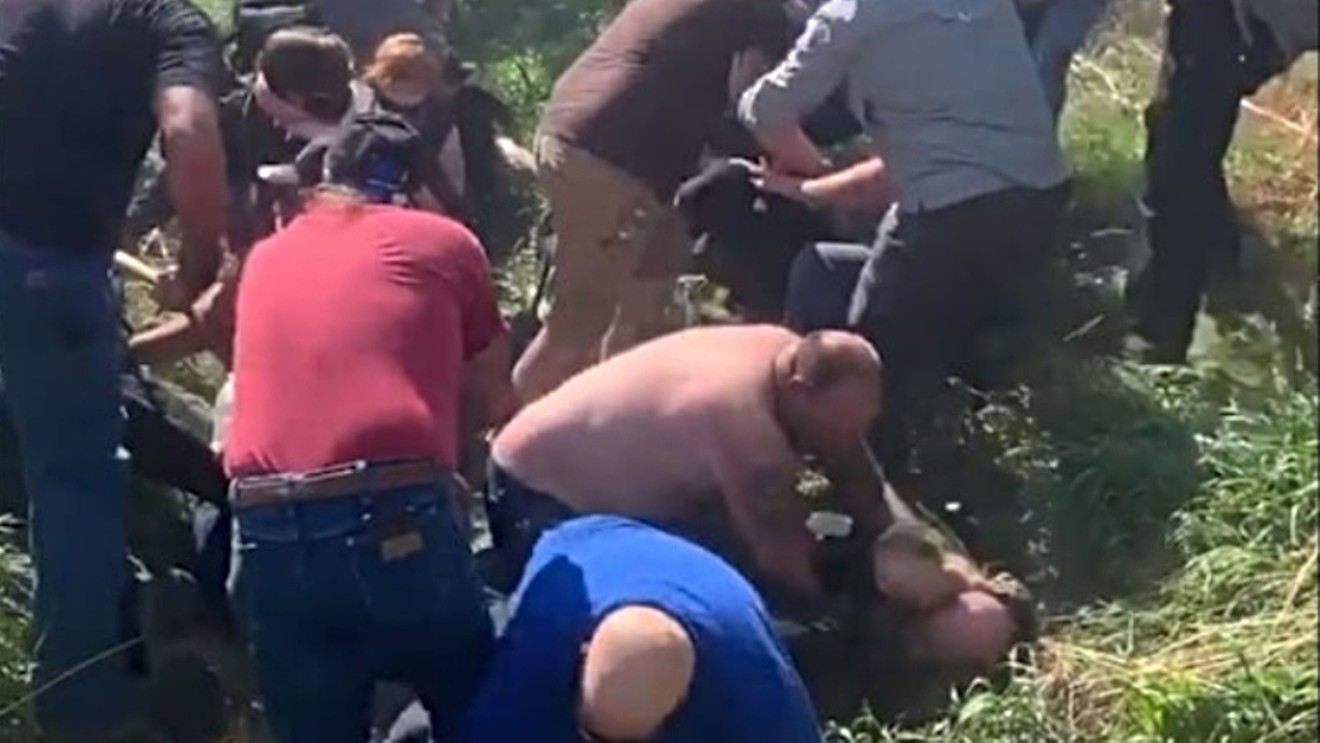 A screen capture of social media footage showing the melee in Fort Collins. @ciarawilsonn via TMZ
In 2017, President Donald Trump famously defended shocking violence committed by white supremacists against anti-racism protesters in Charlottesville, Virginia, by asserting that there were "very fine people on both sides."

This overt dog whistle of a statement came to mind following an August 8 brawl between pro-police demonstrators and assorted Black Lives Matter counterprotesters in Fort Collins. Video of the incident clearly shows the "Back the Blue" crew dishing out ultra-violence against those who dared oppose them, yet Fort Collins Police Chief Jeff Swoboda castigated "both sides" — and his take has been echoed without sufficient pushback in a great deal of the incident's mainstream media coverage.

Meanwhile, the conservative press is actively pointing the finger of blame at its usual bogeyman, Antifa, without the slightest evidence, as it did during Black Lives Matter protests in downtown Denver earlier this year. Witness The Blaze, which asserted that the whole thing started after an attack on a defenseless veteran in a wheelchair, despite plentiful visual evidence to the contrary.

Whatever sparked the flare-up, members of the pro-cop goon squad apparently relished pounding as much flesh as possible. In videos of the clash, a man with a bullhorn can be heard crowing, "You guys came to the wrong city, boys and girls," while another attempted to act as an utterly unreasonable voice of reason when he yelled, "Everybody keep their hands off their weapons! Keep punching each other in the face. Don’t shoot anybody."

The glee with which the fisticuffs were celebrated is seen in this video captured by an outfit dubbed Major League Liberty, complete with the subtly racist title "Antifa Gets Whooped After Invading Suburbs in Fort Collins, Colorado."


Contrast that with the text that accompanied a video shot by Ciara Wilsonn, a sixteen-year-old Fort Collins activist.

In her original Instagram post, Wilsonn wrote: "I was at the Pro Police FCPD rally today. Counter protestors were violently beaten and had no signs of aggression or hostility. Pro Police protestors forced them to the end of the block and then savagely assaulted them. Afterwards the COUNTER PROTESTORS WERE DETAINED. The officers did not tell them why they were being detained. The pro police protestors who literally assaulted these people for no fucking reason other than being PSYCHOPATHS got away with it. I am so sick and tired of this."

Note that after sharing her footage with various media outlets, Wilsonn marked her Instagram page private, probably because she was being attacked by so many right-wing trolls, causing the clip to disappear from many reports in which it had been embedded. But it can be seen in the following tweet:

Another angle of the scuffle that happened yesterday when antifa went into a Colorado neighborhood. I think 3 antifa members were arrested. pic.twitter.com/iXWPMCZdeG

As the tale spread nationally and internationally, Fort Collins Police Services issued a release recounting that "on August 8, 2020, several groups assembled near the Fort Collins Police Services building on Timberline Road. During this time, physical disturbances broke out between members of the different groups. Officers worked to contact all of the individuals directly involved in these fights, resulting in three arrests and one criminal citation."

Michael Townley, Anna Kruger and Joshua Mischler-DeLeon were arrested after the brawl.
Fort Collins Police Services via CBS4
In its release, the FCPS insists that "both sides had active aggressors, and enforcement action was taken against people identifying with both groups. Some of the people who were fighting left the scene before police were able to identify or make contact with them. Officers are reviewing video and actively working to determine who these people were so they can be held accountable. Anyone with information that may help in this investigation is asked to contact Detective CJ O'Loughlin at 970-416-2571."

Swoboda shared some remarks of his own: "We respect everyone's right to peacefully assemble. Our officers have consistently supported these rights in recent months as people have gathered to make their voices heard. For the safety of our community, acts of violence and other unlawful behavior have not and will not be tolerated from anyone. Truly supporting a cause means representing its values. Committing crimes in our community is not a way to support police. We stand for safety, period. We want all of our community members to feel safe here in Fort Collins and we reject any form of hate."

Swoboda hits these same themes in a video:


Most of the local reportage has allowed the Back the Blue narrative to dominate the story, if only because its spokespeople have proven to be the most eager to talk — though not to the Rocky Mountain Collegian, a student publication that has offered probably the most thoughtful account to date.

Such examples are rare. More common is the type of rhetoric used in this Facebook post: "Antifa assaulted someone in a wheelchair. That’s what set off the beat down from residents. Police were on the scene to arrest the commies."

And an ugly dynamic gets uglier.
KEEP WESTWORD FREE... Since we started Westword, it has been defined as the free, independent voice of Denver, and we'd like to keep it that way. With local media under siege, it's more important than ever for us to rally support behind funding our local journalism. You can help by participating in our "I Support" program, allowing us to keep offering readers access to our incisive coverage of local news, food and culture with no paywalls.
Make a one-time donation today for as little as $1.