A photo from our March 2016 post "Witnessing March Madness in Denver From the Worst Seats in the House." Michael Roberts
Today, Monday, March 13, basketball fans across the country are gearing up for the start of the annual NCAA basketball tournament popularly known as March Madness. But according to a new survey, Mile High hoops fans are at an enormous disadvantage when it comes to experiencing and enjoying this annual sports ritual. According to the WalletHub report, Denver is the fourth worst large city for March Madness and ranks at 276 out of 291 total communities analyzed, barely ahead of Kennesaw, Georgia, Poughkeepsie, New York and Colorado Springs, which finished at 280.

The full list is below. But Denver's lousy numbers in major categories used by WalletHub to determine the best and worst March Madness cities clearly contributed to its poor performance overall. The city landed in 177th place for winning percentage by teams from here, 226th in conference championships, 285th in social-media engagement and 274th in stadium capacity.

The NCAA would like Denver to be swept up in March Madness fever to a greater degree, as indicated by the staging of early tournament rounds at the Pepsi Center last year. Teams that appeared included Purdue, Arkansas Little Rock, Iowa State, Iona, Seton Hall, Gonzaga, Utah and Fresno State. But no Denver teams actually took part, either here or elsewhere; the closest squad that made the cut in 2016 was the University of Colorado Boulder, which wound up as an eighth seed but was promptly eliminated by Connecticut.

To learn more about Denver's March Madness woes, we reached out to WalletHub analyst Jill Gonzalez. Here's part of that conversation, as conducted via e-mail. 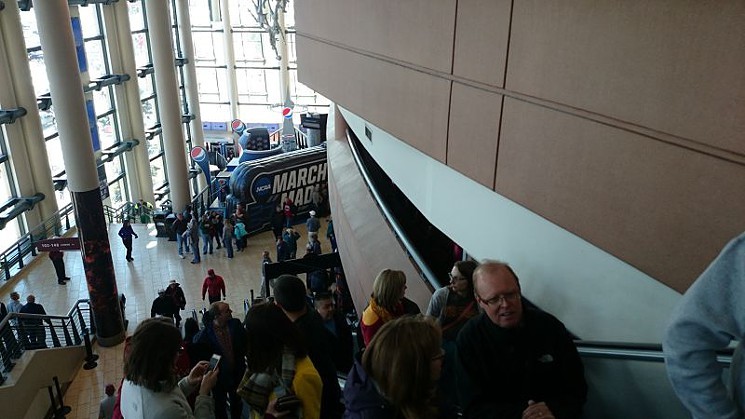 Crowds heading to their seats at the Pepsi Center for March Madness games staged in Denver in 2016.
Michael Roberts
Westword: Denver is generally considered to be one of the best sports cities in the country. Why did it fare so badly when it comes to March Madness?

Jill Gonzalez: Denver didn't fare too well across the board, from team performance to fan engagement.

Is one of the main reasons for Denver's poor performance the lack of a Denver team that regularly competes at a high level in the NCAA tournament?

Denver was dragged down on the overall rankings largely because of its team performance. It ranked 177th for its win percentage over the past three seasons, at just 47.7 percent. This season alone, it has zero regular-season conference wins, ranking 226th.

The closest teams to the Denver area that tend to go to the NCAA or NIT tournaments are the University of Colorado Boulder, Colorado State University and the Air Force Academy. Do your numbers suggest that despite the teams' proximity to Denver, fans in Denver proper don't follow them that closely or have a great deal of interest in them?

Our numbers addressed each of those schools separately, under their own cities.

Denver scored badly among communities as a whole, as well as among large cities. Are there other large cities that aren't home to basketball powerhouses that score better than Denver, and if so, what are some examples?

Because team performance was heavily weighted in this report, the better a team has been recently, the better the city fared overall. However, fan engagement, ticket prices and stadium capacity all could boost a city up, despite how its team has been playing lately.

Is there anything Denver can do to move up in the March Madness rankings beyond having a school in the immediate area suddenly improve to the point where more residents are engaged?

For the purposes of this report, unfortunately, no. We may include data on sports bars and viewership rates in the future, where Denver could see a bump in the numbers.

Continue to see the complete WalletHub countdown, which shows graphically how bad a March Madness city Denver was judged to be. Click to see the full report.