Denver's Top Bottlenecks and How They're Getting Worse 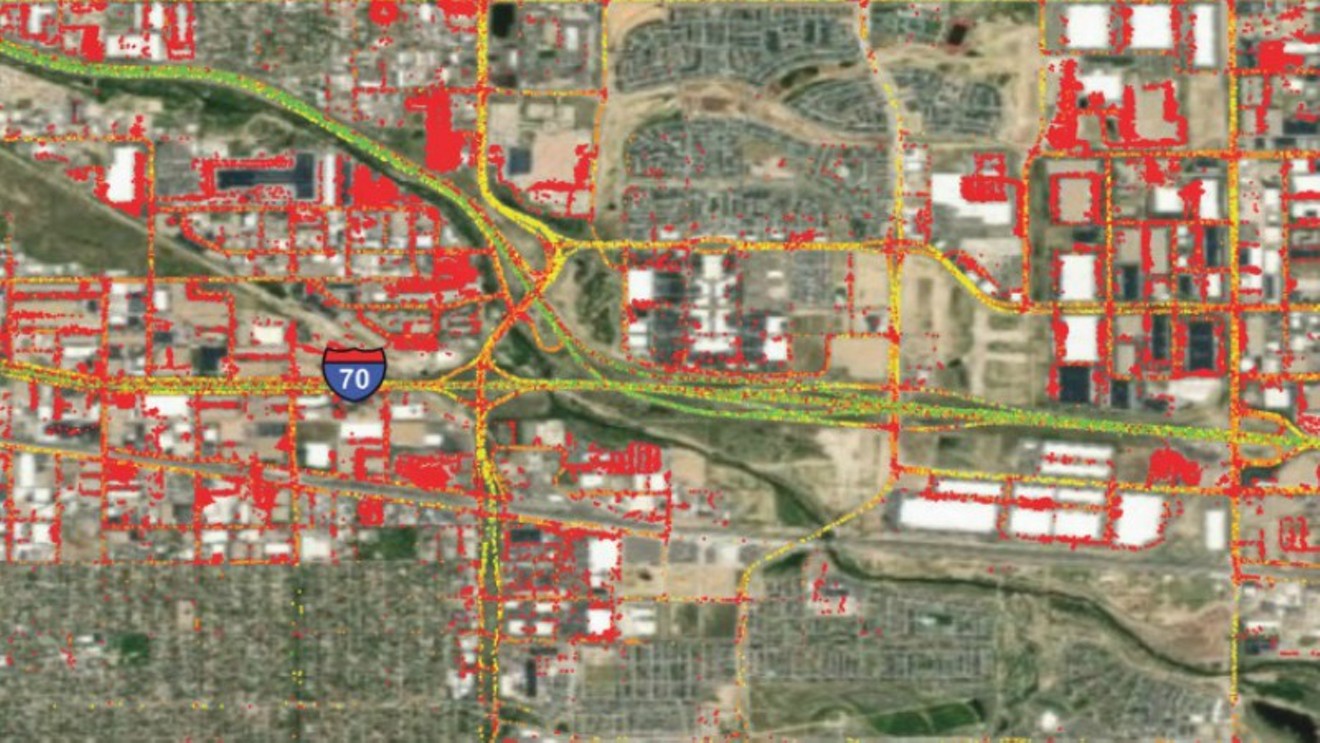 A map of the Central 70 project. American Transportation Research Institute
Most local motorists agree that Denver has become a terrible city for driving, in part because of the many construction projects that are restricting the free flow of traffic in an attempt to improve it over the long haul. And a new report reveals that these issues stand out on a national level, too.

The study, from the American Transportation Research Institute, looks at the 100 worst truck bottlenecks across the country. A trio of Denver routes land among the top seventy — an appropriate number, given that two of the three involve Interstate 70, including the ongoing Central 70 undertaking, which won't be completed for at least two more years, and the Mousetrap, where I-70 and Interstate 25 connect. The other spot cited is the intersection of I-25 and Interstate 76.

This recognition is depressing in and of itself. But it becomes even more so in light of data showing how much average speeds in these areas have fallen over the past year.

Denver isn't in the worst shape of any U.S. metro area, either. Houston and Atlanta, two communities that suffer from traffic congestion of legendary proportions, register seven and six bottlenecks, respectively, while Nashville, Chicago and Philadelphia score four. But the Mile High ties with much larger Los Angeles and the immediate New York City area (there's a major bottleneck in Queens, Brooklyn and the Bronx), and bests several other prominent places known for brain-boiling highway traffic jams — among them Dallas and Washington, D.C., with two bottlenecks each.

Of course, bottlenecks are even worse during high traffic periods, as illustrated in the following graphic pertaining to Central 70: 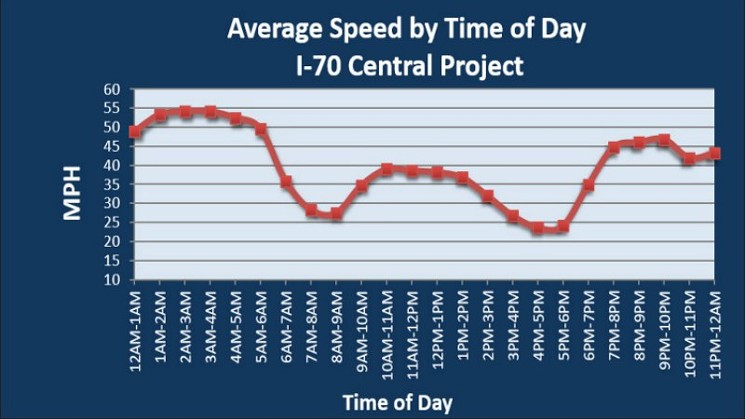 American Transportation Research Institute
As you can see, drivers can travel through this stretch and actually maintain the speed limit only if they're commuting between 2 and 4 a.m. But if they have to hit the road during either morning or evening rush hour, they're unlikely to exceed thirty miles per hour. If they're lucky.

According to the ATRI stats, the average Central 70 speed currently stands at 36 miles per hour. That soars to an exhilarating 39.8 mph at non-peak times, but dips to 29.7 mph when volume is at its heaviest. Moreover, the average speed has fallen by a staggering 10.4 percent in just the past year.

Mousetrap rates are similar. The average is 38.1 mph, boosted by a non-peak average of 42.4 mph — still well below the speed limit of 55, but at least faster than the legal standard on most surface streets. Average peak speeds are much lower, though: 29.7 mph. The speeds are down 3.4 percent year over year.

By comparison, speeds along I-25 at I-76 are lightning quick: an average of 46.4 mph, with non-peak speeds settling at 50.8 mph and peaks dipping to 37.4 mph. But that's still a 5.6 percent decline over the previous twelve months.

These stats resonate with this week's cover story, which asks the question, "Can Denver end its love affair with the car?" Like driving on I-70, discovering the answer may take a long time.
KEEP WESTWORD FREE... Since we started Westword, it has been defined as the free, independent voice of Denver, and we'd like to keep it that way. With local media under siege, it's more important than ever for us to rally support behind funding our local journalism. You can help by participating in our "I Support" program, allowing us to keep offering readers access to our incisive coverage of local news, food and culture with no paywalls.
Make a one-time donation today for as little as $1.