Bre Donnelly (center, holding unicorn) with some of the Joy as Resistance crew. Don Pearce, DPS Multicultural Outreach
Bre Donnelly remembers the moment the Colorado native first recognized that “joy is an act of resistance.” It was at the very first Creating Change LGBTQ conference Donnelly attended while at graduate school at Metropolitan State University to become a licensed clinical social worker, and that saying — originating from an Alice Walker quote — was printed on a banner proudly hanging over a ballroom full of people dancing and laughing together. “It was an incredible moment," recalls Donnelly. "I’d never before felt so much at home.”

That experience ultimately led Donnelly to found Joy as Resistance (JaR), a Denver nonprofit with the mission to “radically increase inclusive, supportive spaces and communities for queer youth.” That would be LGBTQIA2+ youth, who identify as lesbian, gay, bisexual, transgender, queer, intersex, asexual, two-spirit or a combination. Donnelly, who goes by they/them, notes that not only is the organization inclusive, but it's a collective effort above all else. “Joy as Resistance isn’t really about me, and it’s never been about me, and it’s never going to be about me, you know? It’s so much more than anything I could have done by myself,” they say.

Among its services, JaR offers small outreach events called Joyraisers, which support not only the ongoing efforts of the group, but also the youth community, in hands-on style. There was a Joyraiser at the recent Youth on Record Block Party, there will be one will be at the sold-out Hipchicksout Pride party on June 25 at RiNo’s Number Thirty Eight, and another at Aurora Pride on August 6.

JaR’s efforts are spread out in part because the need is so great, Donnelly says. According to the Trevor Project’s 2021 National LGBTQ+ Youth Mental Health Report, 42 percent of LGBTQ youth considered attempting suicide the previous year — and that number climbs to more than 50 percent for trans and nonbinary youth. Anxiety and depression were factors for the significant majority, and only a third of LGBTQ+ youth described their home life as “affirming.”

These grim statistics are nothing new, as Donnelly found after taking a job in 2017 as a KIPP Northeast Middle School social worker, managing crisis intervention and response for students, as well as facilitating the school's Gender & Sexuality Alliance (GSA) and professional development for staff on topics such as trauma-informed care, social justice, equity, and the overall support of queer students. Donnelly also established mental health surveys for the student population, and found that 71 percent didn't think their mental health needs were being met.

But Donnelly realized that there was also joy, talent and strength in that youth community that wasn’t being cultivated or amplified. There was a lot to be done, and not enough hours in the day — at least for a single middle-school counselor. “There were literally not enough providers for me to refer students to,” Donnelly says. “There wasn’t enough resource available to even serve my school; I could not imagine what it was like if we included other schools, too.” And so Donnelly started thinking of ways to fill that gap.

With the help of Denver’s Moonshot program, a Denver nonprofit focused on supporting the “edVentures” of creating the learning environments of the future, Donnelly began developing the plan that would become Joy as Resistance through a series of pilot initiatives. This was during the pandemic year of 2020, and while COVID made planning difficult, it also it also provided money and opportunities to support mental health.

By May 2021, JaR had partnered with Above Ground, Ashe Bowen’s queer-supporting hair salons, on an intergenerational mentoring program called Big Queer, Little Queer. It began with seven mentoring pairs matching adults and youth, and was a big hit. “They really responded positively,” recalls Donnelly. “It was really hopeful, proved to us that it was viable and more a social and emotional support than therapy.”

It also set the tone for future JaR efforts. “This organization is not about predicting and controlling, which is really what the dominant system wants us to be,” Donnelly says. “It’s really more for us about sensing and responding. We want to stay sustainable as an organization while still remaining really connected to the needs of the community.”

The next pilot was a mental health ambulance called Joyride, designed to offer mobile, in-person therapy without a patient making a physical trip to an office — one that might well be difficult or even impossible. “Transportation is a huge issue for so many youth in the community,” Donnelly says. “Inaccessibility in multiple ways. Finding a provider who’s going to believe you. Who knows things about your identity without you having to explain everything. And then, of course, the physical availability.”

But Joyride was only in operation for a short time before the recurring requirements of COVID put a temporary stop to the project. The close quarters of the inside of an ambulance — a retired EMS vehicle — was not the best setting during an ongoing infectious pandemic. 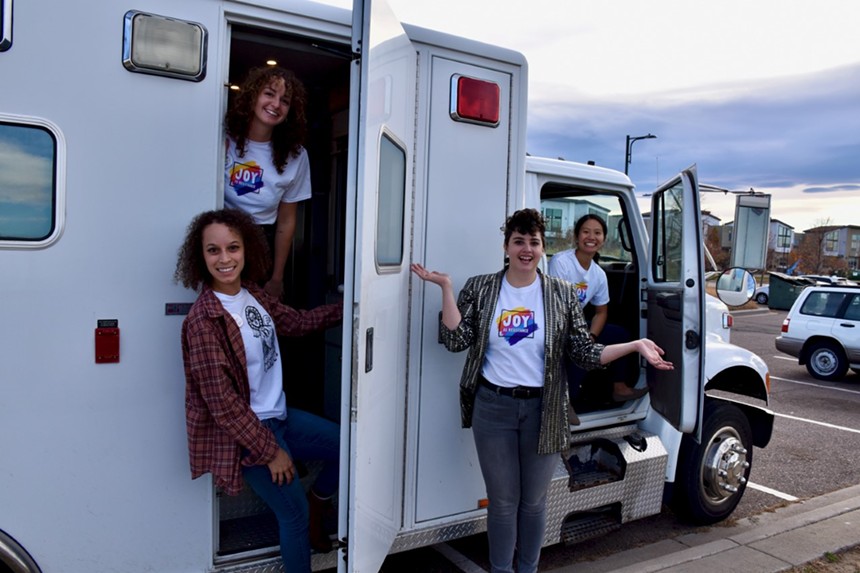 Joyride launched in November 2021.
Don Pearce, DPS Multicultural Outreach
Last summer, the ambulance was renovated in order to create a much better atmosphere while remaining “accessible, affirming and affordable,” Donnelly says. “Our mental health services have to be those three things.”

Joyride relaunched late last year, and has been so popular that the schedule is currently full. Donnelly is looking to expand the contract therapist structure so JaR will be able to offer more services. “It’s not just going to be clinicians,” Donnelly says, pointing to other forms of healing and care such as acupuncture and indigenous forms of medicine. "I’m not sure what that will look like yet, but our goal is to make sure that people have access to the care that feels most relevant to them.”

Joy as Resistance is just getting started. Since it was founded, it's grown to a staff of six, as well as seven boardmembers. “I tend to want to move really fast,” Donnelly says. “I see the need as being really present, and I want to address that need. But there’s a lot that goes into setting up systems for long-term success, and that means a slower on-ramp sometimes. It can be easy to be swept up in the space of immediate need, instead of grounding in joy as an act of resistance. It takes time to build something that keeps everyone in mind. Not just to survive, but to thrive.”
KEEP WESTWORD FREE... Since we started Westword, it has been defined as the free, independent voice of Denver, and we'd like to keep it that way. With local media under siege, it's more important than ever for us to rally support behind funding our local journalism. You can help by participating in our "I Support" program, allowing us to keep offering readers access to our incisive coverage of local news, food and culture with no paywalls.
Make a one-time donation today for as little as $1.