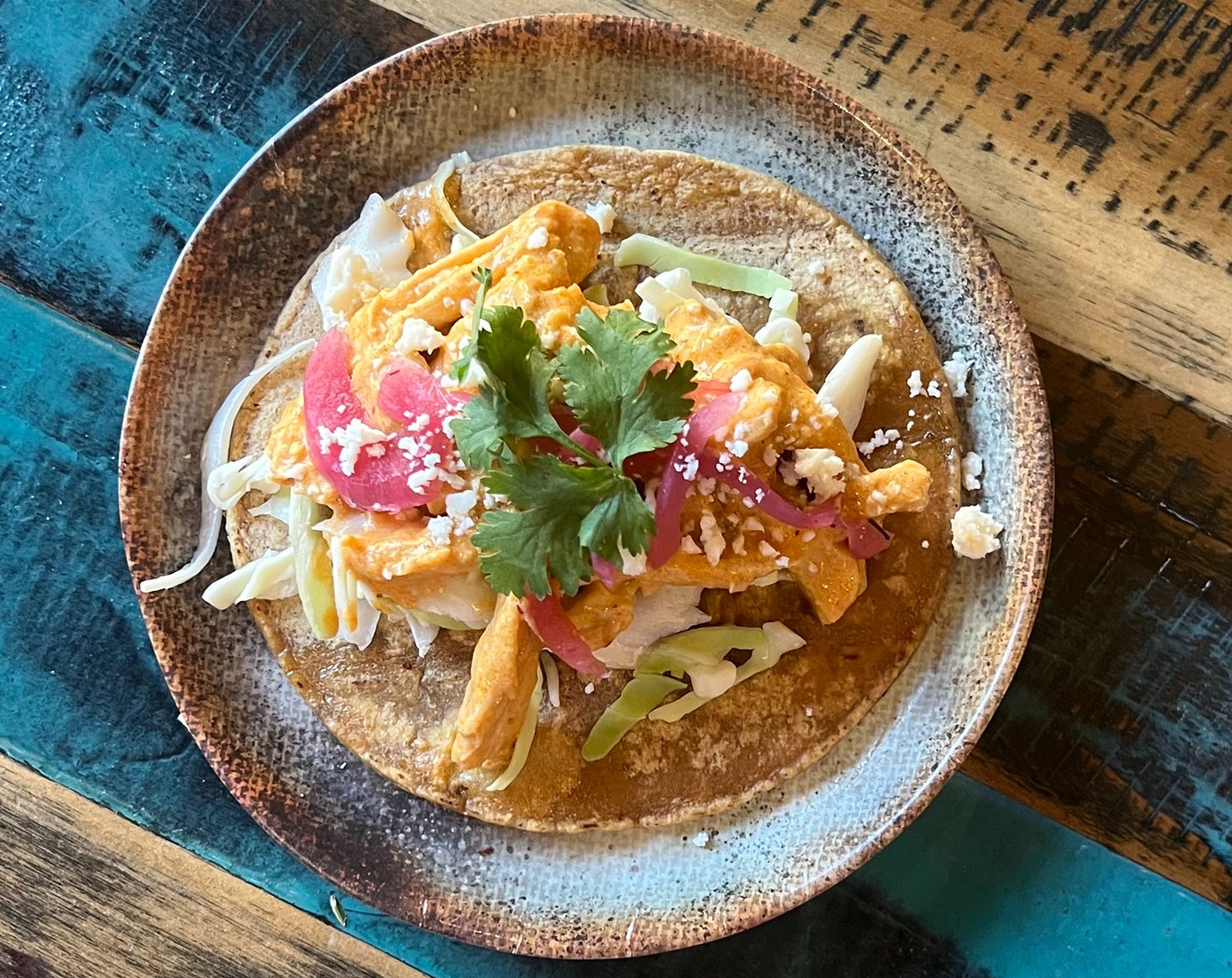 The chicken tinga taco. Guapo Taco
In 2014, 5280 Burger Bar debuted at the Denver Pavilions off the 16th Street Mall — but it was nearly something completely different. "Our original idea was tacos," says owner Don Redlinger. "We ended up on burgers because burger bars were really hot then."

The burger concept was indeed a hit. Eight years later, the Pavilions location is still busy, as is a second outpost in Westminster, which opened in 2017. Last October, the team added a spot in Austin, the original home of Redlinger's partner, Clay McPhail. When a restaurant space that McPhail had owned for over two decades became available following a pandemic-inspired closure, he decided to bring the brand he'd built in Colorado to Texas. "It was an opportunity for [Clay] to get home," Redlinger says. "And a good excuse for me to visit Austin, but our focus is definitely [in Colorado].

Soon, 5280 will add a fourth location at Colorado Mills; Redlinger is hoping it will open by Thanksgiving. But the brand will be expanding in another way, with the debut of Guapo Taco on October 18. It's the realization of the group's original idea back in 2014. "This is the evolution," Redlinger says. "What we do is comfort food in really cool settings, and tacos are my favorite thing right now."

Fried Brussels sprouts from the starters menu.
Guapo Taco
The setting is the former Los Chingones at 14500 West Colfax Avenue in Lakewood, right across from the future home of 5280 Burger Bar at Colorado Mills. "We saw the opportunity to capture this spot and get some gravity here," Redlinger explains. "It's two of the things people want the most." The space was already ideally set up for a taco-centric restaurant, he notes, and has a separate upstairs bar that can be used for private events, happy hours or as overflow when the place is busy.

Along with Redlinger, director of operations Todd Levick headed up the development of the Guapo Taco menu. "We had a lot of fun looking at — and eating — every taco on the planet," Redlinger says. With a focus on fun, accessibility and quality, the menu is a mix of traditional options like chicken tinga, carne asada and lamb birria and more Americanized takes on tacos.

This taco is inspired by a New England lobster roll.
Guapo Taco
There's the Baja Chicago with pork chorizo sausage on a flour tortilla dressed with ingredients inspired by a traditional Chicago dog (chopped white onion, pico de gallo, piparra pepper, tomato and mustard slaw). The lobster taco is doused with warm butter, lobster-roll style, and accompanied by a New England slaw. And yes, there is a burger-inspired taco. This homage to 5280 Burger Bar comes with lettuce, pickle relish, cheddar cheese, special sauce and fried corn.

Along with tacos, there's a selection of starters like fried Brussels sprouts with pork belly, pepper jam and cotija; corn ribs; and green chile queso. As at 5280 Burger Bar, ingredients will be locally sourced and seasonal. Meanwhile, the bar program is focused on agave spirits, with thirty tequila options and five mezcals, as well as a lineup of cocktails.

Like 5280 Burger Bar, Redlinger hopes that Guapo Taco will become a staple in the neighborhood, a "comfortable, fun place to hang out." And with holiday shopping season coming, there will be plenty of hungry people in the area looking for just that.
KEEP WESTWORD FREE... Since we started Westword, it has been defined as the free, independent voice of Denver, and we'd like to keep it that way. With local media under siege, it's more important than ever for us to rally support behind funding our local journalism. You can help by participating in our "I Support" program, allowing us to keep offering readers access to our incisive coverage of local news, food and culture with no paywalls.
Make a one-time donation today for as little as $1.