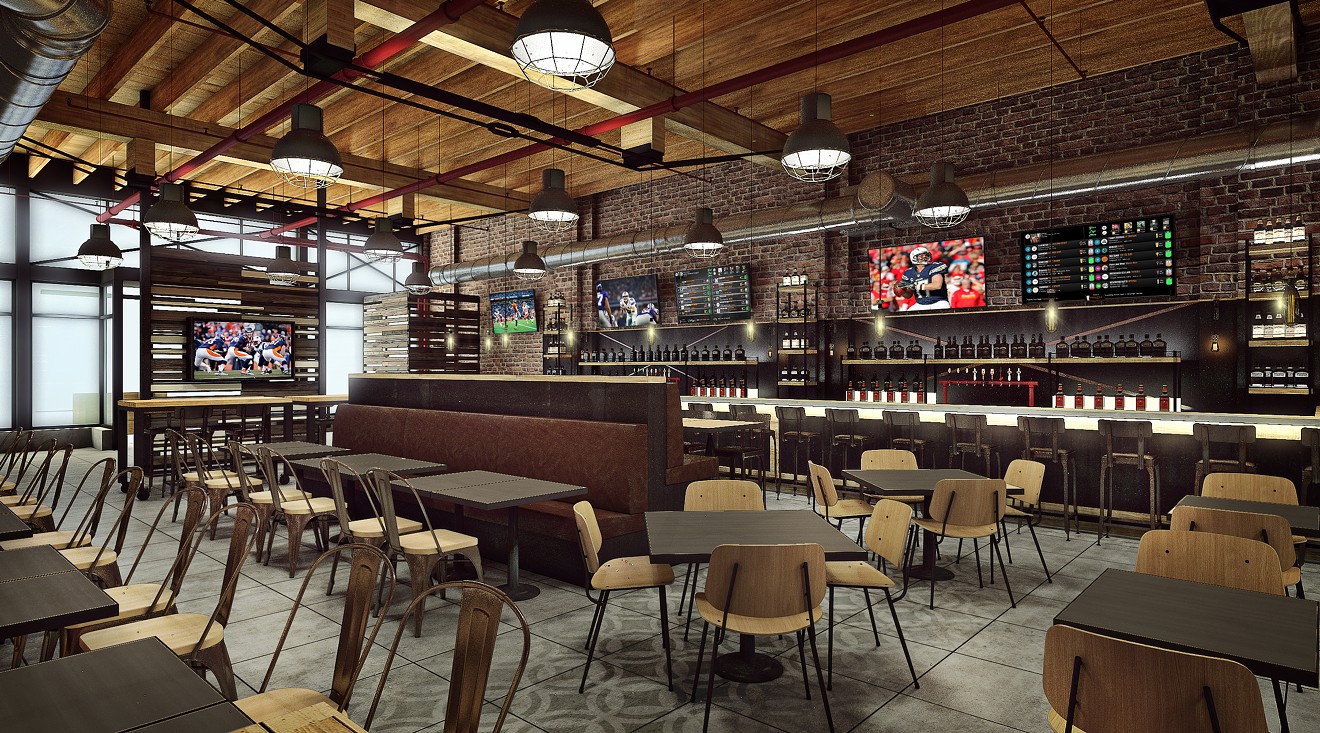 Sports, food and Colorado beers will be the focus of Element Kitchen & Cocktail. Courtesy of Element Hospitality
A couple of weeks ago, we noticed that the space at 1134 Broadway displayed new signs announcing that Element Kitchen & Cocktail would soon be opening in what was once part of the City Hall space. A few clues on the company's Facebook page indicated that Dallas chef/restaurateur John Tesar would be involved and that the project would also somehow encompass a speakeasy and sneaker shop. On May 26, Element Hospitality, the Las Vegas-based restaurant and club group behind the effort, gave us a tour of the spacious new restaurant and bar, and filled in some of the details on what customers can expect come July.

Element Hospitality's Jon Spadafora describes the upcoming restaurant as a "farm-to-table sports bar" with a menu designed by Tesar. "Sports-bar food doesn't always get the the level of detail that Denver has come to expect," Spadafora points out.

Part of Element's goal when bringing on Tesar — known for his Dallas steakhouse, Knife — was to ensure high-quality ingredients and creativity that would set the restaurant apart. "We also liked his ability to execute consistently and to execute over a large geographical area," Spadafora adds, mentioning a beef-cheek burger and bacon charcuterie board as planned menu items.

The spacious Element Kitchen & Cocktail will soon open on Broadway.
Courtesy of Element Hospitality
He also explains that Tesar isn't just a celebrity name attached to the opening menu; Element signed a long-term contract with the chef, who will be responsible for ongoing menu evolution as well as back-of-the-house hiring and training. Right now, the group is looking for a chef de cuisine who will be responsible for day-to-day operations in the kitchen.

For the design, Element is relying on the building's venerable bones for much of the ambience, with exposed brick walls and wood beams, lofty skylights and concrete floors. Some of the barnwood that will be used for accents is coming from a ranch where Spadafora grew up near Montrose. And while there will be multiple televisions placed strategically so that every seat has a view of live games, Spadafora says that when there are no games on, other selected programming will be played so that annoying sports talk won't be blaring during the day.

SneekEazy, the bar upstairs, will have a separate entrance from the street that will open to a flight of stairs leading to a 400-square-foot shoe boutique stocked with new and vintage collectible footwear, some of which will be priced in the thousands of dollars. But behind that, Spadafora says, there will be a "tongue-in-cheek speakeasy — because we want people to know about it." An artist's rendering of the SneekEazy shoe boutique and bar space above Element.
Courtesy of Element Hospitality
The speakeasy is much larger than typical hidden bars, he notes, so the wide-open space will be divided into several different lounge areas while also designed to encourage mingling. A rooftop bar with views of both Lincoln Street and Broadway is part of the plan, and a small garden on the roof will supply some of the cocktail ingredients for the bar. While SneekEazy will be completely separate from Element, a small food menu from Tesar will be available upstairs.

Element Hospitality now controls the lease for the former City Hall space next door, too. According to Spadafora,the group plans to build out a club there, but it will be an entirely separate concept that won't get under way until after Element and SneekEazy open.