Adrian Miller enjoys some in-depth research into Black-owned barbecue restaurants. Courtesy of UNC Press
Food historian Adrian Miller won a 2014 James Beard Award for his first book, Soul Food: The Surprising Story of an American Cuisine One Plate at a Time (2013). He followed that up with The President's Kitchen Cabinet in 2017, exploring the history of African-American chefs in the White House. Miller says the reason for writing his third book, Black Smoke: African Americans and the United States of Barbecue, which is scheduled for release on April 27, is the same as it was for his first two efforts: "The people who decide what stories are being told are white — and they're getting recommendations about what stories to tell from other white people."

This leads to a much narrower range of the history of food in the United States and how certain foods and dishes have evolved, he points out. Black Smoke tells the story of the importance of African-Americans on the birth and evolution of barbecue: cooking meat at low temperature over wood coals in a way that's distinct from other forms of outdoor cooking.

"I saw that African-Americans had been pushed so far to the sidelines of barbecue that they were in danger of disappearing," Miller continues. "The book is consistent with my other books in that it tells a hidden history or a forgotten history." 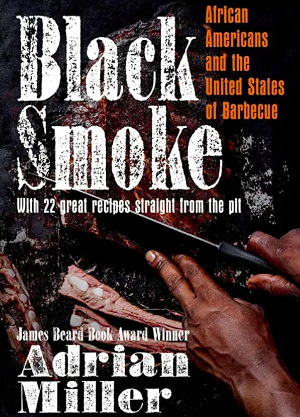 Black Smoke debuts on April 27, 2021.
Courtesy of UNC Press
Miller began thinking about writing Black Smoke after watching television shows and news stories on barbecue. He remembers a Fox News story on the "who's who of barbecue" in 2015 — in which all fifteen people mentioned were white. And then there was coverage of the American Royal Barbecue Hall of Fame, which between 2011 and 2018 named only one Black chef out of its many inductees. "I've got to make the case for why Black people are so important to barbecue," he explains. "I'm not saying that Black people exclusively own barbecue, but we've been instrumental in its story."

The book, published by the University of North Carolina Press, is "part celebration and part restoration," the author says. To gather material, Miller delved into history books and forgotten stories of the early days of barbecue, dating all the way back to when Christopher Columbus first set foot on land in the Western Hemisphere — and promptly stole and devoured some unattended meat cooking on a wooden frame over an open fire. This story, he notes, is commonly used as one of the earliest references to barbecue, but it wasn't until African-Americans, Native Americans and European Americans came together in Virginia that pit smoking — or what we now recognize as barbecue — came into existence, he notes. By the late 1700s, though, barbecue had coalesced into a distinctive American cooking style.

From there, Miller follows that meaty history all the way to the pit masters of today; his visits to restaurants, trailers and takeout joints in every corner of the country illustrate the spread of African-American cooking, from the whole-hog barbecues of Rodney Scott (who is almost single-handedly breathing new life into the style by opening restaurants throughout the South) to the Southside Chicago barbecue big on rib tips, hot links and fries as a side.

Colorado has also had its share of famous African-Americans in barbecue. Miller gives a shout-out to Daddy Bruce Randolph, and also to Columbus B. Hill, who threw enormous barbecue festivals for thousands of guests at a time in the 1880s. Miller discovered Hill's unmarked grave at Riverside Cemetery in Denver, and he's planning a fundraiser to put a headstone there.

The book also covers newer trends, such as the spread of barbecue turkey as a healthier alternative to pork.  You can find chopped turkey in the Carolinas, pulled turkey in Memphis and turkey links and ribs in Chicago, Miller notes.

Long-cooked brisket may be the star of Central Texas barbecue, but Miller found African-Americans making a slightly different style in Houston, where Creole-influenced sides, boudain sausage (a regional spelling of boudin) and chopped, rather than sliced, brisket dominate. And in Chandler, Arizona, he found a sixth-generation barbecuer from West Tennessee who recounts stories of his family smoking meat, some of them as enslaved people before the Civil War. 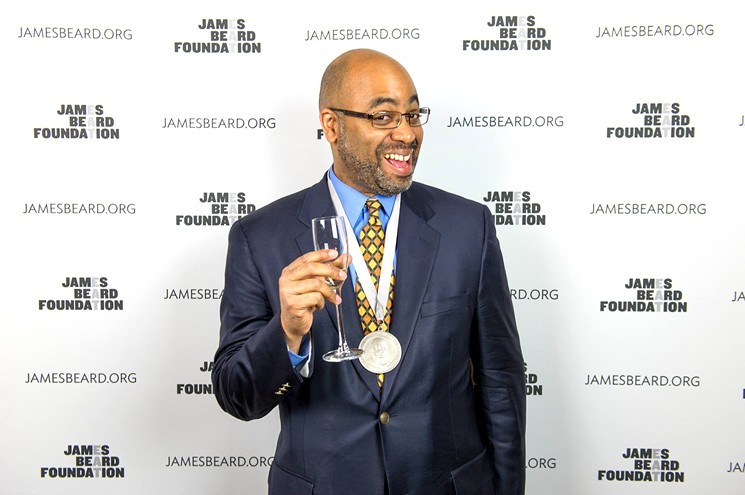 Adrian Miller poses with his 2014 James Beard Award for his book, Soul Food.
Adrian Miller
Despite racial tension and racism in regions where barbecue took hold, Miller sees the food as a way that people put differences aside — and still do. "People easily came together over barbecue," he says. "You could be in a white-owned place with a steady stream of Black customers." But he also points out that many eateries had dining rooms for white customers and takeout windows on the side for Black customers.

Some of that takeout business — even post-segregation — may have been the saving grace of Black-owned barbecue businesses over the past year, however. Miller was finishing his book when the pandemic began, and all of his restaurant visits were done, so he watched anxiously to see who would stay open. "At a lot of Black restaurants, their main business was takeout," he notes. "I thought the book was going to be an elegy, but it's just kind of shifting. I'm seeing more food trucks, more of the brother and sister on the side of the road, more social media savvy."

Ultimately, Black Smoke looks with hope to the future. "The foodies — middle-class people fascinated by food, more adventurous than their parents and with more disposable income" — may have gotten their information about white-dominated barbecue from the media, but Miller's now making sure that African-American stories are being told, too, so that barbecue seekers will know the whole, colorful truth.

Black Smoke is available for pre-order on Amazon and will be available at the Tattered Cover and other Denver bookstores beginning April 27.
KEEP WESTWORD FREE... Since we started Westword, it has been defined as the free, independent voice of Denver, and we'd like to keep it that way. With local media under siege, it's more important than ever for us to rally support behind funding our local journalism. You can help by participating in our "I Support" program, allowing us to keep offering readers access to our incisive coverage of local news, food and culture with no paywalls.
Make a one-time donation today for as little as $1.