Annette Looks Beautiful, But It's Not Yet Comfortable

A mix of flavors, colors and textures make Annette’s gnocchi a treat for the senses. Danielle Lirette
Annette looks like the best thing going in Stanley Marketplace, the former airplane-ejection-seat plant turned 21st-century mall. Tall windows let in waves of sunshine that are especially welcome in this cavernous industrial building. Shrubs and trees spill merrily from indoor planters. Metal leaves flutter off a wall, and live plants grace each table. Such natural touches make the fledgling restaurant’s gray-and-white contemporary design feel warm and sophisticated, not stark.

Annette looks beautiful. But it’s not yet comfortable.

I’m not talking literal comfort, though cushions and throw pillows would certainly soften the metal stools and wood banquette that grow harder the longer your meal progresses. Annette is a restaurant that’s figuratively hard to settle into. Chef/owner Caroline Glover speaks of comfort food and creating an extension of home, but the quirky menu — a short list of vegetable-heavy small plates and an even shorter list of substantial, family-style proteins — says otherwise. “A lot of people look at the menu and think, ‘I’m not going to find anything on here I want to eat,’” she acknowledges.

That’s a daring approach for a novice restaurateur. Most chefs I talk with aspire to put out finely crafted yet approachable fare that sounds so good, you want to return often to try it all. Then again, guts are part of this restaurant’s DNA: Annette was named for Glover’s feisty, martini-drinking aunt. Glover’s strategy might pay off in the long-term for Annette, but right now it’s good to know what you’re in for before you set foot in the door.

Because what you’re in for might be tongue. You may try to work around it; you may try to fill up on deviled eggs and radish toast so that you don’t have to face it. But the menu is small, so if you’re already trying to avoid the few large-format entrees — either because of their high cost or because you can’t agree on what to share — you’re left with scant options to add heft to your meal. Octopus, chicken-liver pâté and beef tongue may be energizing additions to a menu, but they’re certainly not the stuff we associate with the comforts of home.

Odd, isn’t it, that octopus has become commonplace but tongue still gives people the heebie-jeebies? Of course, not everyone has an aversion to tongue. The cut is a staple at taquerias, where the chopped, griddled preparation makes it easy to forget what you’re eating. Here, though, it’s brined, braised and grilled, then served in long, thick pieces that look a little too much like the real deal. A ridge of pickled beets and mustard seeds helps camouflage the tongue somewhat, but without the crispy bits that come from a taqueria’s hot, oiled griddle, the off-putting mushiness remains. You might like the tongue and the accompanying marrow toast more than you’d expected, but it’s not exactly comfort food.

Although Annette pushes some boundaries, by and large, Glover’s restaurant — the first for this Culinary Institute of America grad — feels hip and familiar. It follows in the footsteps of many small-plates eateries that anchor our dining scene, not least of which is Acorn, where Glover and her sous-chef previously worked. Sodas are made in-house and come in flavors such as rosemary and lemongrass-herb. Seasonal ingredients — currently dandelion greens and pea shoots — are revered. Pickled accents pop up everywhere. A wood-fired grill adds a cozy rusticity that you smell when you walk in the door.

Annette looks lovely.
Danielle Lirette
Sounds like a recipe for success, right? And it is, sometimes. Gnocchi are simultaneously sauteed and pillowy, dotted with greens and sprinkled with pea shoots. Deviled eggs are terrific with a dash of romesco. An ice cream sandwich, with fresh mint ice cream tucked inside a chocolate chip cookie, is as fun and summery as a run through the sprinkler. Servers are friendly and attentive. But the menu lacks the easygoing, substantive small plates so common elsewhere (no sliders, no crudo), so you sense a discomforting upsell to those pricey, family-style proteins.

Execution gaffes chafe, too. I tried picking around rubbery octopus, but the accompanying patatas bravas were fried through and through, like oily chicharrones. Potato-leek gratin arrived burned. The whole fish was bland, since the accompanying Calabrian chile jam was mostly smeared underneath and easy to miss when dodging the head and navigating the spine. And without that knockout flavor, the $39 price tag didn’t justify all the work. “I wish the kitchen would just do this for us,” a friend sighed, picking the first of many bones from his mouth.
A well-designed plate of spiced lentils, arugula and burrata could’ve been dynamite, but the lentils were mushy, with no hint of spices (supposedly coriander and cumin). Spiced cream and charred orange also failed to show up on a plate of grilled carrots and snap peas. Bibb lettuce with sunflower seeds, radishes and pickled ramps was nearly too pretty to eat, arriving like a layer cake of ruffled greens. But the goodies were stingily doled out, and we quickly tired of eating plain lettuce. Buttermilk panna cotta barely filled the bottom quarter of a canning jar, which seemed as skimpy as a men’s Speedo, not exactly an ideal send-off to our meal. 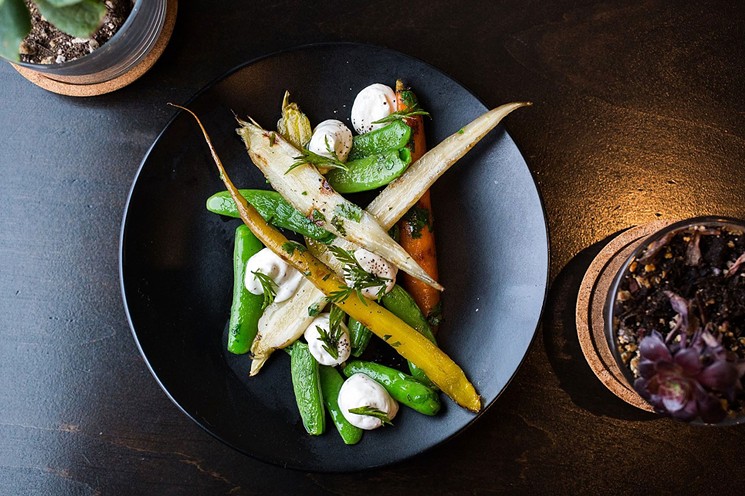 Grilled carrots and peas at Annette.
Danielle Lirette
Glover’s desire is to serve “comfort food, but in a very simple and rustic way.” The thirty-year-old Texas native has the training to pull it off, having worked at New York’s Spotted Pig and Acorn, that powerhouse of seasonal small plates. But she says the jump from employee to owner was harder than expected, with a steep learning curve made even steeper by the fact that she and her sous-chef ran the kitchen alone for the first six weeks. Two other cooks have since been hired.

Residents of Stapleton, Park Hill and Lowry were ready for better options than what’s been traditionally offered on this side of town, and they treat Stanley Marketplace as their back yard. Annette has abundant potential, not to mention an adventurous soul that’s to be applauded. If Glover attends to some rough patches beneath the lovely surface, the dining experience should live up to the beauty of the decor.