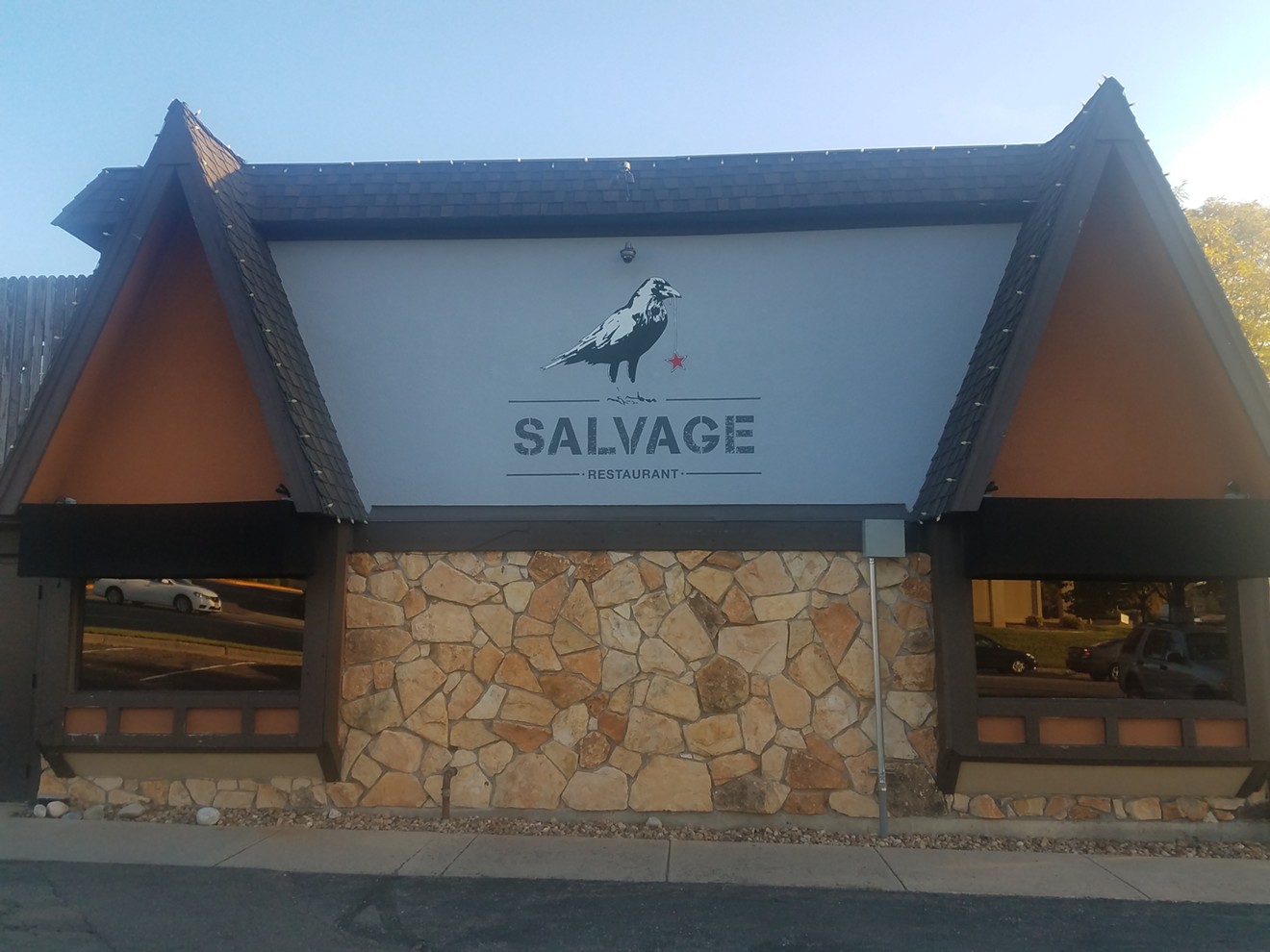 The new Salvage sign in place of the old Summit name. Courtesy of Salvage
At first mention, the name “Salvage” didn't exactly evoke images of tasty steak dinners, historic Denver eateries or any kind of culinary experience, for that matter. Rather, it sounded like a secondhand store where I could take my old toaster and ’90s grunge-era button-up shirts. So it raised my eyebrow just a tad when I heard that the Summit Steakhouse, which has been at 2700 South Havana Street in Aurora since 1977, not only had new owners, but that those owners had changed the name of the restaurant to, yes, Salvage.

“Forty years ago, the Summit was a place where people got dressed in their furs and went to have a nice steak dinner — it was an event,” says Hopi Mondale, who now owns the revamped restaurant along with her husband, executive chef Stephen Mondale.

While Hopi says she didn’t want to see the iconic steakhouse die after forty years, she knew it was time to modernize the restaurant for old and new clientele alike. “I was excited to bring Aurora a great place to have a steak dinner without breaking the bank or traveling all the way downtown to get it,” she explains. “My restaurant isn’t fine dining; that’s an old term. Salvage is what I like to call ‘premium casual.' People can get dressed up to the nines and come have a nice steak dinner with their spouse, or they can belly up to the bar in their jeans and have a burger. Anything goes.” 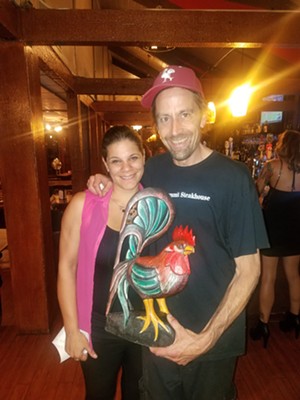 Salvage owners Hopi and Stephen Mondale.
Courtesy of Salvage
The Mondales acquired the restaurant in May — after it had gone through five different owners in the span of ten years. “'Salvage' is a seventeenth-century term that means ‘to be saved,'” Hopi explains. “We saved the shiny gems that made the Summit great, like some of the staff members who’d been here for 35-plus years, the dishes that kept people coming back, and the shiny knickknacks from when the restaurant first opened.”

The couple decided to keep some nostalgic parts of the Summit, serving old favorites such as the French onion soup ($7 cup; $9 bowl), escargot ($15) and chateaubriand (a 16-ounce, oven-roasted filet mignon for two for $89), all while attracting new customers by freshening up the menu with modern touches like a weekend brunch menu, happy hour seven days a week, and a brand-new lunch menu built around prime rib sandwiches, soups and salads ($7 to $22).

The curious new logo — a raven with a star on a string in its mouth — doesn't exactly conjure visions of French onion soup or twice-baked potatoes. Here's how Hopi explains it: “Ravens collect shiny things. They are introspective creatures, and if you look in their nests, you’ll see that they gather items that they deem worthy of saving. We like to think we did this with the Summit. We collected everything that was great about it while throwing out what wasn’t working.”

She says that she and her husband “are also represented in this symbol of the raven with the star because he’s saved this restaurant, and my middle name is Star, so this embodies us as a team, working together to cultivate our vision for this establishment — by ‘salvaging’ the parts of the the Summit that shined when the restaurant was in its heyday, and changing the parts that were driving people away.

“We definitely struggled with the name change,” Hopi continues, “because we were afraid of the pushback from the community and the staff.” However, she says, they were pleased at the support they received from longtime customers and staff when they replaced the name, decor and a large part of the menu. 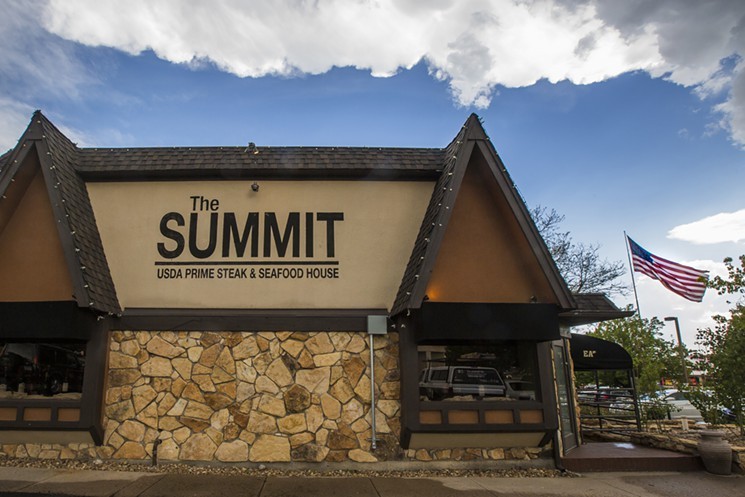 The "before" shot.
Courtesy of Salvage
The update removed several menu items, changed the way some dishes are prepared and found new places from which to source ingredients. For instance, the calamari ($13) no longer comes in fried rings and tentacles; instead, you get an actual strip of calamari steak. The Mondales source all of their grass-fed beef from the same farm, and all of the lobster comes from cold North Atlantic waters. “When you get all of your food from the same places, your food tastes the same every time you visit. Consistency is key. You won’t enjoy a steak one night and think it’s mediocre the next time you eat here,” Hopi points out.

The Mondales have introduced a steak-of-the-month-club, where you can get a steak dinner with your choice of a soup or salad for $19.95 every Thursday; there's also a “drunk yoga class” led by a certified instructor while participants incorporate a glass of wine or beer into the moves ($15 the first Wednesday of each month), and a “wine and design” painting class ($45) every third Thursday of the month. The daily happy hour from 3 to 7 p.m. offers half-price house wine, beer, mixed drinks and appetizers, so that you can try out new cocktail creations that change with the seasons. And finally, they've pulled the plug on live piano performances, a Summit tradition. 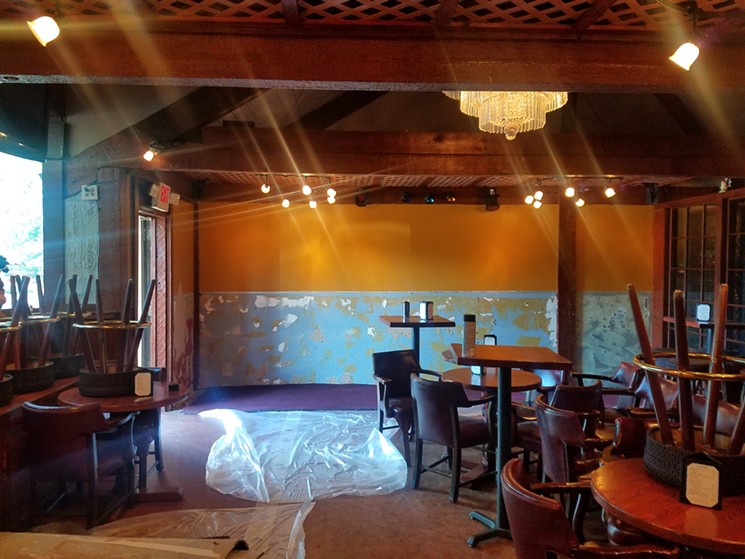 The Summit as it appeared in the middle of its transformation to Salvage.
Courtesy of Salvage
“We want to earn loyalty from old and new customers,” Hopi states. “We already have regulars who come in five nights a week. On any given night, we could have people celebrating their 75th wedding anniversary and, at the table next to them, people on their first date — and the mix is perfect. That’s what we envisioned. We welcome anyone who’s looking for a good meal who wants to feel like they’re being taken care of.”

The new owners’ vision for salvaging a forty-year-old steakhouse could indeed turn out to be like that raven on the sign, showing diners a shiny new way of going out for a steak dinner while saving a tradition that might otherwise have been lost in the swarm of new Denver eateries.