Chicago Has Malört, but Soon Denver Will Have Bäsk Nömört 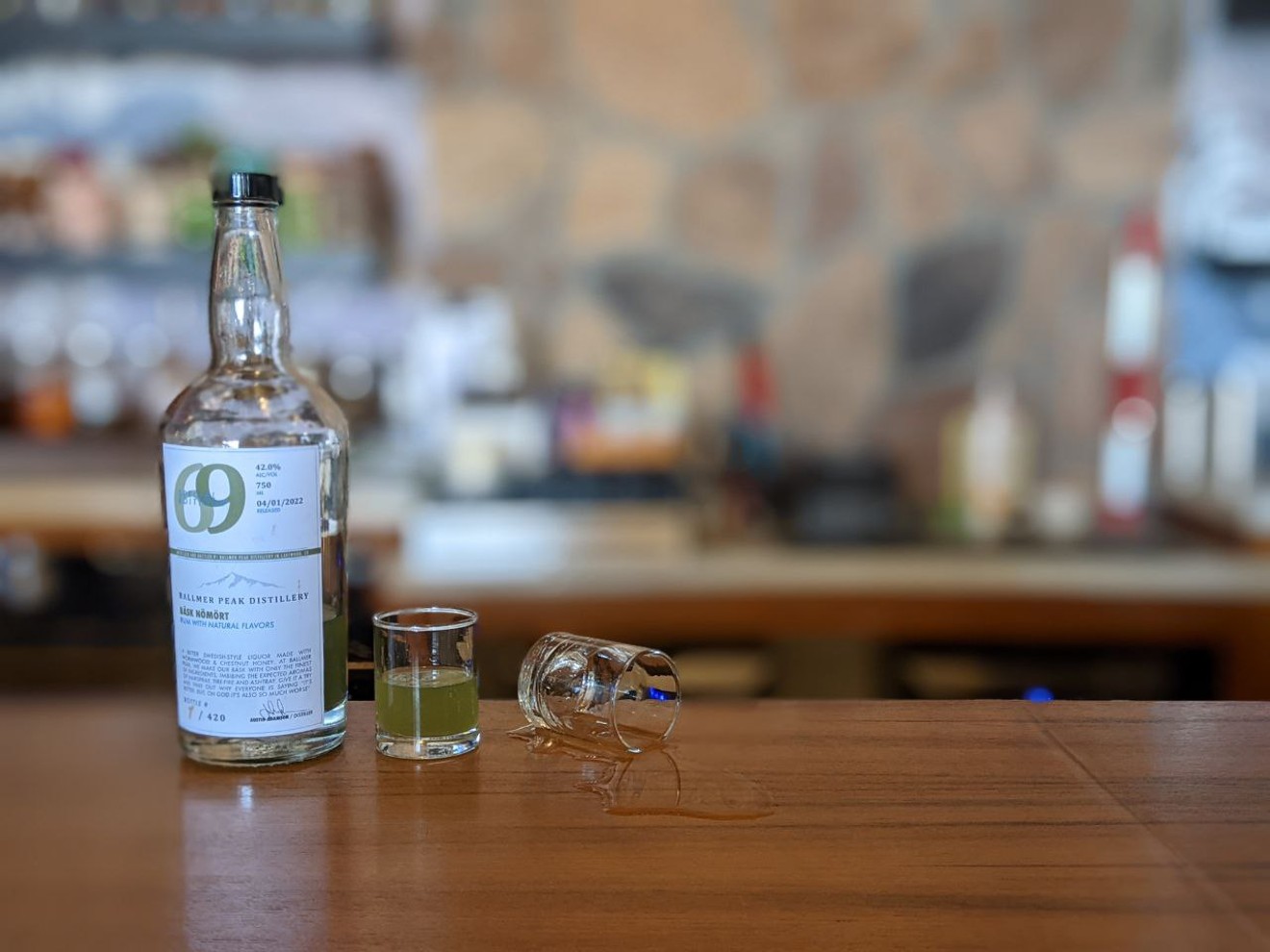 Bäsk Nömört is a very real April Fool's joke. Ballmer Peak
"One night in 2019, [Eric] and I ran out of all other alcohol at our apartment, but we had a bottle of Malört..." recalls Austin Adamson, who co-owns Lakewood's Ballmer Peak Distillery with Eric Storm and has long been a fan of the extremely bitter spirit that's loved by some and hated by (probably) many more. The two ended up finishing off the whole bottle. "After you take a shot, it just gets worse," he adds, laughing. But that night, an idea was born.

Malört, which gets its bite from wormwood, is a staple in the Windy City — a Chicago Handshake is a shot of it paired with a can of Old Style, and taking one down is a rite of passage. Those who somehow enjoy its "tire fire" flavor, as Adamson describes it, used to have to beg friends to bring back bottles when they traveled to Chicago. But in recent years, its distribution has reached Denver.

Now, though, Denver's getting its very own version of a wormwood-based spirit, thanks to a "dumb fun idea," as Adamson says, of an April Fools' joke that's no joke at all.

On April 1, Ballmer Peak will debut its special release number 69 (wink, wink), Bäsk Nömört. "Bäsk" is Swedish for "bitter" and is also the Malört style of spirit, while "nömört" is a play on "no more," which is what you may be saying after trying a sip.

"Hairspray, tire fire and ashtray" are the aroma notes of this new spirit.
Ballmer Peak

The idea to make Bäsk Nömört got buzzing after Adamson attended a National Honey Board event where he tasted chestnut honey for the first time. "It's very unique. It's not sweet," he says. "It doesn't have the characteristics of traditional honey. It's bitter and earthy, with notes of a fresh rubber compound — like the smell in the lobby of a Discount Tire."

While others at the tasting were put off by the chestnut honey, Adamson was inspired. This year, he was able to make some small test batches using Ballmer Peak's overproofed rum as the base, along with wormwood and the chestnut honey (not for sweetness, he notes, but for its "weird extra layer" of rubbery bitterness). Pleased with the appropriately unpleasant results, Adamson has been busy trying to get Bäsk Nömört into bars, restaurants and liquor stores for its April 1 debut.

Trash Hawk Tavern, a new bar on South Broadway whose owner was inspired to open the place by the neighborhood bars she frequented while living in Chicago in her twenties, is planning an April Fools' release party for the new spirit.

Other bars currently on board to carry it are the Electric Cure in Edgewater, Wrigley's Chicago Bar on West Colfax and  The Bindery in LoHi. You'll also be able to find it on the shelves at King Solomon Liquor, Atlas Wine and Liquor, and Cana Wine & Spirits — as well as directly from Ballmer Peak, of course, which is located at 12347 West Alameda Parkway in Lakewood. More bars, restaurants and liquor stores will be added soon.

The suggested retail price is $28 for each 750-milliliter, wax-dipped, individually numbered bottle. "We'll keep it around until we've done 420 bottles of it," Adamson notes, adding that its future remains cloudy for now. "We'll see if the Denver area is ready...."
KEEP WESTWORD FREE... Since we started Westword, it has been defined as the free, independent voice of Denver, and we'd like to keep it that way. With local media under siege, it's more important than ever for us to rally support behind funding our local journalism. You can help by participating in our "I Support" program, allowing us to keep offering readers access to our incisive coverage of local news, food and culture with no paywalls.
Make a one-time donation today for as little as $1.