It's being sold ten months after Crazy Mountain moved out of the massive former brewery facility at 471 Kalamath Street, where it had been brewing, canning and kegging beer since 2015. The equipment belongs to the owner of the 42,000-square-foot building, an investment entity called 471 Kalamath LLC. That holding company is in turn owned by Colorado businessman and philanthropist Steve Mooney.

471 LLC has filed plans with the City of Denver, via River Rock Capital, to construct a five-story, 274-unit apartment complex on the site, which runs along the southwest side of Kalamath. A representative of River Rock Capital didn't return an email from Westword seeking comment about the project. 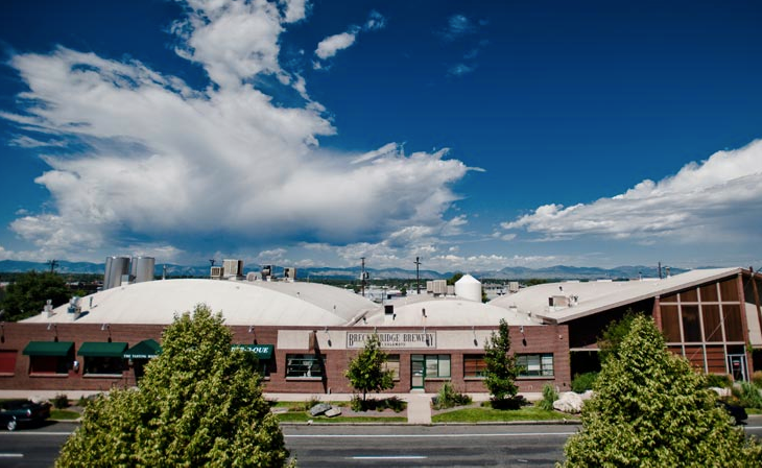 The 471 Kalamath Street building as it looked when Breckenridge Brewery was there.
Breckenridge Brewery
Here's some of what's up for sale: a massive, fifty-barrel brewhouse with hot and cold liquor tanks and a whirlpool; more than forty fermentation tanks ranging in size from fifty barrels to the two-story-tall, 200-barrel ones that loom over the top of the building; two huge grain silos with a total of 150,000 pounds in capacity; an entire cold room and refrigeration system; three forklifts; numerous bright tanks; air compressors; a high-tech Krones bottling line; a Wild Goose canning line; and a keg washing machine.

The auction ends May 18.

The auction will end the 25-year history of beer-making at 471 Kalamath, which is where Breckenridge Brewery built itself up from a local microbrewery to a national name between 1996 and 2015 — even using the address for the label of one its beers, 471 Double IPA. In 2015, Breckenridge outgrew the location and moved to a gorgeous new campus in Littleton, just before the brewery was purchased by AB InBev. In turn, it sold the building and equipment to 471 Kalamath LLC, which leased it to Crazy Mountain.

Tanks and more tanks are for sale at auction.
Crazy Mountain Brewing Facebook page
Founded in the Vail Valley town of Edwards in 2010, Crazy Mountain attempted a major expansion into packaging, but it began to face some problems just a few years later. The company was evicted from its original home in Edwards in early 2018 because it didn’t pay the rent, then kicked out of a second location in Winter Park. After more problems, the brewery's board voted to replace the founder in 2019.

The pandemic wasn't good to Crazy Mountain, either, and although it continued to make and sell beer — as well as to contract-brew for other breweries — it never reopened its taproom. Then last June, company president Barry Watkins told Westword the brewery would leave Kalamath for a much smaller space at 1505 Ogden Street, where Alpine Dog Brewing was located. Alpine Dog is now in the process of moving.
KEEP WESTWORD FREE... Since we started Westword, it has been defined as the free, independent voice of Denver, and we'd like to keep it that way. With local media under siege, it's more important than ever for us to rally support behind funding our local journalism. You can help by participating in our "I Support" program, allowing us to keep offering readers access to our incisive coverage of local news, food and culture with no paywalls.
Make a one-time donation today for as little as $1.