Sweet! This Company Is Trying to Help Bees Through Denver's Warmer Winters

In the winter, bees hibernate, but they get confused on warm days. Free Range Beehives
Like so many locals, bees head to Denver’s parks and other outdoor spaces in the spring and summer. Then in the cold months, they settle into their own hives, hibernating with the queen in the center, young bees in the middle and older bees on the outside. They keep their home between 70 and 75 degrees by sticking their heads in empty cells of the hive and vibrating their wings to warm other cells.

On warm days in the winter, bees leave the hive, returning to their summer haunts in search of more pollen; with global warming, there have been many more of these winter missions. But if they are unsuccessful, the bees are forced to deplete their honey stores at a higher rate in order to get the hive back to a comfortable temperature and restore their energy.

That's where Free Range Beehives comes in. The year-old company founded by two father-son duos focuses on commercial beekeeping, installing hives on the properties of businesses rather than in people’s backyards. “As beekeepers, one of our key jobs is to make sure that our bees have stored enough honey by this time of year to make it all the way through winter,” says CEO Mike Rosol, a master beekeeper. “If they haven't stored enough honey on their own, that's when we should supplemental feed them.”

Beekeepers can do that by adding heavy sugar syrup and other foods to the hive. 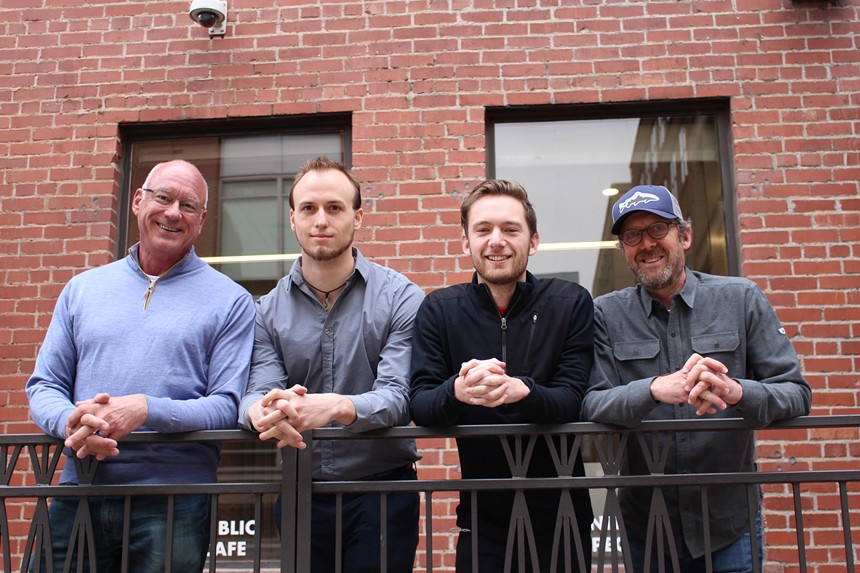 The father-son duos behind Free Range Beehives.
Free Range Beehives
The business concept, developed by Rosol and Dave Mathias, who’ve known each other for thirty years, is already taking flight. In its first year, the company installed several hives, including ones at the University of Denver and Gates Corporation; subscribers pay a setup fee and an annual fee for Free Range Beehives' services. To sweeten the deal, they get to keep the honey that the bees produce at their location.


Mathias's son helps Rosol tend to the bees, while Rosol's son works with Mathias on the business and sustainability side. The company typically installs three beehives on each corporate property; each beehive has about 50,000 bees in the summer and 30,000 in the winter. Free Range Beehives is now supplementally feeding the two DU hives, where the queen is getting ready to hibernate and all the male bees have been kicked out for the winter.

Bees have a 2.5 mile radius for pollination, so it’s important for beekeepers to know the potential of the area down to the mile. Denver is a tricky environment for bees because of the high altitude, relative dryness and winters that don’t stay consistently cold. “Our climate here in Denver is much, much different than...the climate in New England, or the climate in Canada or in Florida,” Rosol notes.

At each corporate location, there are typically three hives each containing around 50,000 bees.
Free Range Beehives
The team visits the hives each month to monitor their health, checking to be sure there are bees at all stages of life inside, that the queen is tended to and that no parasites are infecting the hive. A main danger is the varroa destructor, a mite that infects beehives worldwide, rapidly reproducing inside hives and passing disease on to the bees. If the Free Range team discovers mites, it treats the hive with chemicals to eliminate them.

Along with mites, human interaction with the environment in the form of pesticides and climate warming contributed to the 41.8 percent of Colorado’s bee colonies lost in just the last year.

“The reason a lot of companies seek them out for sustainability purposes is because honeybees are a keystone species and they are the center of the entire web of interactions in all ecosystems that stem from their pollination efforts,” says John Rosol, Mike's son and the company's chief sustainability officer. “Everything they do in an ecosystem increases the biodiversity of that system, so just having them in an area in a stable, healthy population makes the entire surrounding environment healthier.”

Part of the company's mission is educating people on how bees work.
Free Range Beehives
While helping to reinvigorate Denver’s bee population has environmental benefits, the company also conducts employee wellness programs related to bees, using them as metaphors for teamwork and selflessness in the workplace. Explains Mathias: "Once you see 6,000 bees running around on a frame of the hive, you're hooked pretty quickly."
KEEP WESTWORD FREE... Since we started Westword, it has been defined as the free, independent voice of Denver, and we'd like to keep it that way. With local media under siege, it's more important than ever for us to rally support behind funding our local journalism. You can help by participating in our "I Support" program, allowing us to keep offering readers access to our incisive coverage of local news, food and culture with no paywalls.
Make a one-time donation today for as little as $1.
Catie Cheshire is Westword's editorial fellow. After getting her undergraduate degree at Regis University, she went to Arizona State University for a master's degree. She missed everything about Denver -- from the less-intense sun to the food, the scenery and even the bus system. Now she's reunited with Denver and writing news for Westword.
Contact: Catie Cheshire