Beer Calendar: Woods Boss, Hogshead Breweries Will Light You Up 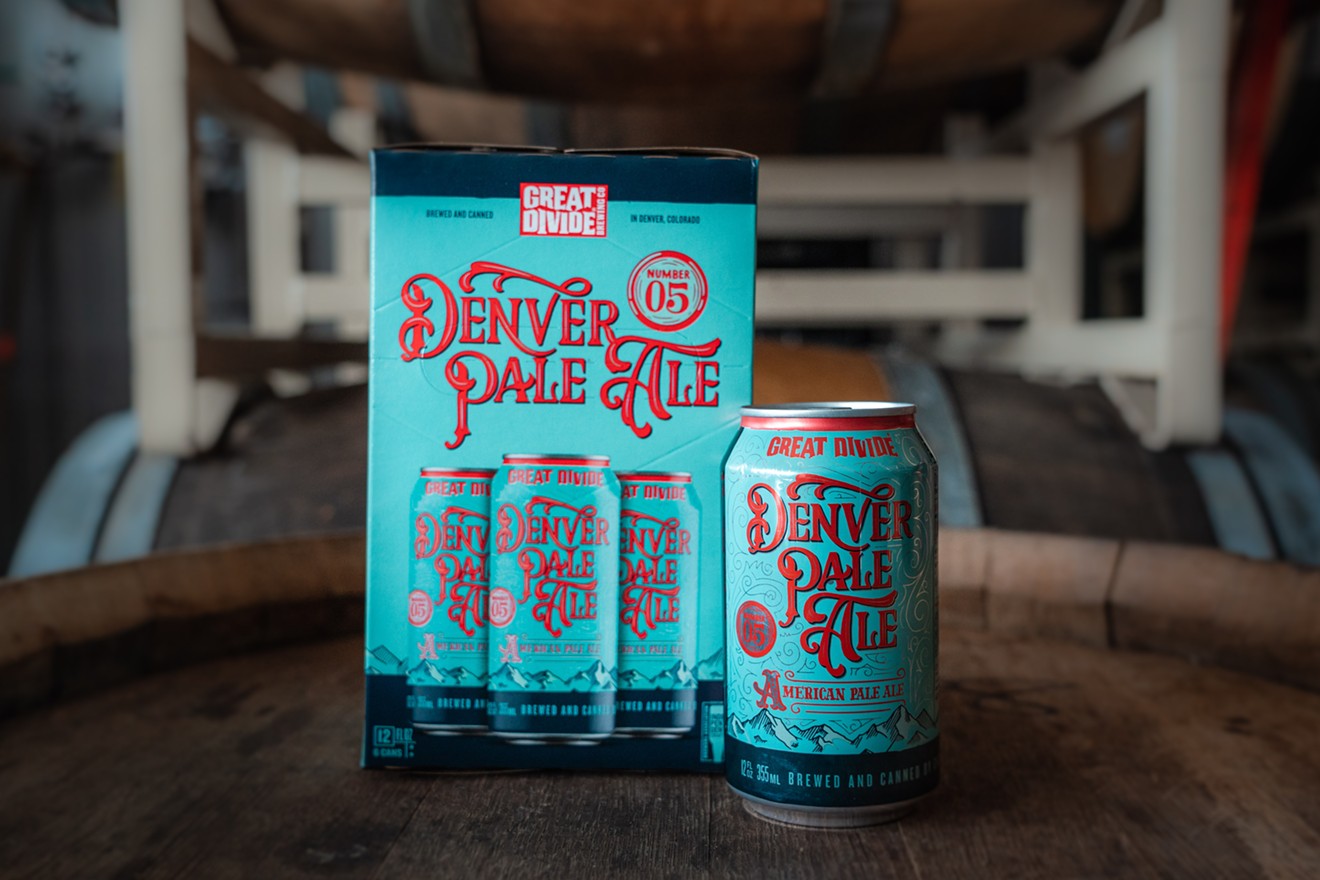 Pikes Peak is looking for a design for its brand-new cans of Tejon Mexican Lager, which it started brewing upon opening the second Pikes Peak taproom, the Lager House, in Colorado Springs. The easy-drinking lager is made with flaked maize and Lemondrop hops; it's named after the street where the Lager House sits. The details are available on the brewery's website, but they include a look that will be more fun than the brewery's existing label design.

Great Divide, meanwhile, is seeking the next artist to design its Denver Pale Ale cans, which have changed their look each year for the past six years with images from a new artist. "We are looking for artists to use Denver and Colorado's cultural identity as inspiration to capture our city and state's beautiful essence in their artwork," the brewery says. Find the submission details on Great Divide's website.

Keep reading to see all of this week's tappings and releases.

Woods Boss Brewing
Wednesday, January 27
Available for pre-order today: "When a dump truck forgets to lower its bed and takes out the power lines in front of your brewery, obviously you make that into a beer!" That's the word from Woods Boss Brewing, which went through that exact nightmare a few weeks ago. The result is What the Truck!?! (Electrical Dumpster Truck Fire) Double IPA, which was brewed with Pilsner and Cara Ruby malt, fermented with two strains of kveik yeast and generously hopped with Citra, Bravo, Chinook, Columbus and Centennial. Pre-order now; pick up on Friday.

The next edition of the F*CK COVID four-pack is here. Each time, four Denver-area breweries select one special beer for this mixed pack, which is sold at each location; then the brewers or brewery owners go online to talk about the beers and answer questions. This time around, the four-packs include Dry Dock Brewing 25•15 Imperial Stout; Jagged Mountain Craft Brewery Cold Heaven Chocolate Cherry Stout; Joyride Brewing Fluff Capacitor Hazy IPA; and Woods Boss Brewing Right Side of the Hammock IPA.

Recently tapped: Strange Craft Beer Company has just tapped a new beer called 2020 Hindsight. It is a double-dry-hopped IPA made with Mosaic and Citra hops.

Spice Trade Brewing taps the first in what it plans to be a long line of rotating pale ales for 2021. Azacca Pale is a 5.1 percent ABV "light pale ale with notes of guava, lemon zest and orange rind," the brewery says. It was dry-hopped with Azacca and Citra hops. Spice Trade opens at 3 p.m.

Great Divide Brewing
Thursday, January 28
A handful of adult beverage producers on the Brighton Boulevard side of RiNo have teamed up to make a special beer incorporating all of their names. The Great Mockery of the Iron Folly is a Baltic Porter aged with vanilla in aquavit and Cabernet Franc barrels before being blended. The collaborators were Great Divide Brewing, Mockery Brewing, Ironton Distillery and Bigsby’s Folly. A portion of the proceeds will go to support the RiNo ArtPark, a new green space nearby. The beer will be tapped at each collaborating taproom today.

Each month, Holidaily Brewing in Golden selects an organization or business to support through its Raise a Pint, Lend a Hand fundraiser. This month, the gluten-free pioneer has selected the Falling Rock Tap House to support. "Due to COVID-19, they are really struggling and need help keeping their doors open," Holidaily says, pointing to a GoFundMe page that Falling Rock has set up to help sustain itself. So today, 10 percent of all Holidaily taproom beer sales will be donated to Falling Rock.

Newish in cans: Mockery Brewing now regularly cans three of its beers: Rock the Fuck On Forever, a double-dry-hopped IPA; Tropical Demise, a blond ale with passion fruit and mandarin orange; and Paths of Victory, a robust porter with bourbon-barrel-aged vanilla beans and toasted coconut that's aged on whiskey-soaked oak.

Hogshead Brewery
Friday, January 29
Hogshead Brewery celebrates its annual Hogshead Days today and tomorrow with a variety of cask-ale tappings and a can release. This is when "we pull the dark, roasted and big beers...while they last," the brewery says. There will be firkins of an old ale, barleywine and wood-aged porter and stout. In addition, there will be 54 cans of cask-conditioned Old Bill Barleywine. First come, first served.

Woods Boss Brewing releases Colory-Land, a hazy IPA collaboration that it made with 1623 Brewing and True Respite Brewing, both in Maryland (hence the mashup name).

River North Brewery
Saturday, January 30
River North Brewery's Washington Street taproom releases bottles of Double Cask J. Marie, an amped-up version of its signature saison that has been aged first in a single-malt whiskey barrel and then in a rye whiskey barrel. The 10.5 percent ABV ale has notes of oak, whiskey and caramel layered on top of J. Marie's existing hints of banana and clove.

New Image Brewing has two interesting new beers available on tap and to go in cans. The first is Big Nelson Energy, a 9.5 percent ABV double IPA made with a single hop variety, Nelson Sauvin. It will be part of a new series called Big Hop Energy. Nelson Sauvin is a Southern Hemisphere variety loaded with tangerine, grapefruit and white-wine flavors. The second beer is Green & Orange Gummi IPA, a 7.8 percent ABV beer made with orange zest and lime. It is also part of a new series of beers that New Image is brewing to mimic the flavors of gummy bears using only fruits and spices (so no gummy bears were harmed in its creation).

Thursday, February 4
Since the annual Firkin Rendezvous festival in Colorado Springs had to be canceled this year because of the pandemic, a wide variety of breweries around the state are participating in a new concept called Firkin February, which, like the Rendezvous, will be a fundraiser for the Colorado Brewers Guild. Station 26 Brewing is one of the first to get things going, with a series of four firkins it will tap each Thursday this month. The first is Dry-Hopped Helles Lager. That will be followed on the ensuing Thursdays by Mocha Milk Stout, Juicy Banger IPA, and a hazy IPA ((more details to come on this one).

Epic Brewing
Friday, February 5
Epic Brewing is joining other Colorado Brewers Guild members this month for Firkin February, which will take the place of the Firkin Rendezvous, a CBG fundraiser held each year in Colorado Springs. Epic will tap a new firkin each Friday this month, starting with Strawberry Milkshake IPA.

Joyride Brewing is also participating in Firkin February by releasing a unique ten-gallon batch at 4 p.m. each Friday this month, with some proceeds going to the Colorado Brewers Guild. Today's beer is Orange Creamsicle Kölsch. It will be followed next week by Doontoon Scottish Ale with Apricot. After that, it's DDH Ah, Ale Yeah! #10 Hazy Pale Ale and Doontoon Scottish Ale aged on Amburana wood.

Strange Craft Beer Company is going big for Stout Month, which is celebrated each year in February by a wide variety of breweries. Strange will tap at least five different stouts this month, starting today with The Vaccine, a 10 percent ABV Russian Imperial Stout. "Time to get vaccinated," the brewery says. "Get your first shot today... and then come back for your second shot three weeks later. We'll make sure we hold enough back in reserve."

Burns Family Artisan Ales releases New Love & Strawberries, a 10.75 percent ABV imperial stout made with seven pounds of fresh strawberries per barrel. The beer was in collaboration with Bottleshare, a nonprofit that supports industry workers and their families when they experience adversity outside of the workplace.

Tuesday, February 9
To celebrate the Colorado Brewers Guild's Firkin February fundraising month, Strange Craft Beer Company taps Ain't-Cho Mango Stout on cask. This 7 percent ABV beer was conditioned on ancho peppers and mangos.
KEEP WESTWORD FREE... Since we started Westword, it has been defined as the free, independent voice of Denver, and we'd like to keep it that way. With local media under siege, it's more important than ever for us to rally support behind funding our local journalism. You can help by participating in our "I Support" program, allowing us to keep offering readers access to our incisive coverage of local news, food and culture with no paywalls.
Make a one-time donation today for as little as $1.