This won't be happening in 2021, but we're getting closer. Brandon Marshall
As you probably remember, March 17 — St. Patrick's Day — was closing time in 2020, the day that bars, breweries and restaurants across Colorado were forced to curtail in-house service as a way to try to slow the spread of COVID-19. Many of these establishments have noted this sad anniversary while appreciating the fact that they can now be open at limited capacity indoors and with outdoor seating.

But to keep things from getting out of hand this St. Patrick's Day, the state's Liquor Enforcement Division warned watering holes that its officers will be out in force (and probably not in green suspenders). "LED takes public safety concerns very seriously, and over-service violations may result in administrative action up to and including revocation of a liquor license," the agency noted. "LED will be checking on health-order compliance and advises licensees to limit mixing with people you do not live with as much as possible to help reduce the spread of COVID-19. We have just started experiencing great results for future successes and recovery for all businesses and citizens of Colorado. Let’s keep up our outstanding work to protect the public from future harm."

So count your Irish blessings and keep your cool.

Jonathan Shikes
Wednesday, March 17
Denver Beer Co. throws open the doors to its brand-new taproom at 2425 South Downing Street, which will be open from 11 a.m. to 10 p.m. The opening lineup will include Downing Street Dubbel, Rosedale Golden Ale, Against the Currant, Opacity Imperial Hazy IPA, Sunrise Sensei Black IPA, as well as the Denver Beer Co. flagship brews. DBC Eats will fire up the smoker with a menu focused on approachable, beer-centric fare. The brewery's Arvada, downtown and Rosedale locations will also have a small amount of Pot o’ Gold Blonde Irish Stout with green glitter added.

Woods Boss Brewing offers you a chance to have the luck of the Irish with some dice-rolling specials (get one roll with each full pour of beer). Prizes include beer discounts, a can of beer to go, or 20 percent off green merchandise. The brewery will also tap a new small-batch beer. Reubens will be served, as well.

Cerebral Brewing has canned up four beers for you. Brewers Dozen, a collaboration with Berkley Donuts, is a 10 percent ABV imperial stout made with black Hawaiian sea salt, caramel and vanilla. Eclectic Potion — Grenache is a new version of an 11 percent triple IPA made with rose Grenache grape juice and Citra, Mosaic, Cashmere and El Dorado hops. DDH Rare Trait is a double-dry-hopped version of Cerebral's house IPA, made with Citra, El Dorado and Mosaic hops. And finally, Paper Lantern is a 5.5. percent rice lager.

Crooked Stave releases three new beers: Glitch in the System, an IPA that was double-dry-hopped with Strata;
I Like a Latte, a bourbon-barrel blended coffee stout with milk sugar, vanilla and cacao; and Scoville, a white stout brewed with Scotch bonnet peppers, vanilla, coffee and cocoa.

Old 121 Brewhouse in Lakewood celebrates its two-year anniversary by opening at 8 a.m. for St. Patrick's Day and tapping its Irish Red Ale. There will also be Irish food from Colorado Craft Butchers (pre-orders recommended). "Following a successful first year whose anniversary party was scuttled by a burgeoning pandemic, surviving a harrowing and tumultuous second year calls for celebration," the brewery says. Old 121 will tap several of its own beers as well as a few guest beers over the next few days, including TRVE Brewing's Buried Sun on Thursday, Crooked Stave Fruity Cedar Box on Friday, and Old 121's own Tropical Fruit Sour on Saturday.

Luki Brewery taps Dancing Leprechaun, a traditional dry Irish stout with a bit of a twist," the brewery says. Luki fermented the beer with black currant, "which adds a bit of sweetness and dark fruit complexity."

4 Noses Brewing
Friday, March 19
Station 26 Brewing and 4 Noses Brewing have teamed up to create two versions of the same German-style Helles lager being released today in eight-packs that includes four cans of each. The beer, which is called 26 + 4 = HELLES, was brewed at both breweries with Pilsner malt from Leopold Brothers. Then 4 Noses aged its version in its oak foeder. "The oak imparts a subtle hint of vanilla and dry tannins reminiscent of white wine," the brewery says. Station 26, meanwhile, decided to dry-hop its batch with Galaxy and Nelson Sauvin, the latter hop also having white-wine notes. The beers should also be on tap at their respective breweries.

Bierstadt Lagerhaus brings back its Starkbierzeit event, which the brewery describes as "Oktoberfest's smaller, drunker brother." "Starkbier has to have an ABV of 7.5 percent or more, and we will have a special treat for you that day to kick off your strong-bier season: We will be tapping a reserve keg of our BFL [a barleywine-style lager] we released last summer. Come wearing your lederhosen or dirndl."

Cerebral Brewing releases two barrel-aged barleywines at 10 a.m. — online only via an app called Oznr; the bottles won't be available for pick-up until Monday. The beers are Celestial Origin, a 14.6 percent ABV barleywine brewed with floor-malted Maris Otter barley and a touch of Colorado wheat, then aged for fifteen months in Tennessee whisky barrels; and Celestial Origins with Corvus Coffee— the same beer, only conditioned on Corvus Coffee Roasters Savage Geisha from Finca Deborah in Panama.

Berkeley Donuts
Saturday, March 20
After surviving its first year during an unprecedented pandemic, Berkeley Donuts — an offshoot of Hops & Pie — is celebrating its first anniversary by tapping a collaboration beer with Cerebral Brewing. Salted Chocolate Caramel Stout was made with Salted Chocolate Caramel doughnuts from the doughnut shop, which will also bring back some fan-favorite flavors, including S’mores Donut and Lemon Meringue-filled Sourdough Donut.

Baere Brewing celebrates the first day of spring 2021 — yes, it is spring — by releasing a small amount of Brettanomyces-conditioned saison in cans. The brewery will also be tapping a handful of other saisons both from Baere and from some of its brewing friends. There will be a food truck on hand as well.

Celebrate Saint Patrick’s Day (a little late because of the weather) with Dry Dock Brewing, which will host festivities under its outdoor tent at the South Dock location from noon to 4 p.m. The brewery taps Irish Red and Pot of Gold Pilsner, along with other beers. The Celtic Steps Irish Dancers will perform from 1 to 2 p.m., and Big Paddy will play live Irish rock and roll on the patio from 2 to 4 p.m. In addition, Wood Paddle will serve Irish food.

Dos Luces Brewing, which makes corn and maguey-based gluten-free chicha and pulque, celebrates the spring equinox with a bottle release and a limited cellar tasting. The corn-based beer is Túpac Amaru III Imperial Black Chicha; it was made with roasted corn malts and aged with palo santo-wood staves in peach brandy barrels from Rising Sun Distillery. "The result is a rich, smooth, roasty, spicy chicha with a nice balance of bitter and sweet," Dos Luces says. Then at 3 p.m., Dos Luces will present a vertical tasting of all six Túpac Amaru III releases from the past thirty months. Reservations are limited to ten people.

Come to Westfax Brewing dressed in green for the release of Shamrock Stout, an 8.9 percent ABV nitro stout with cacao nibs and mint added. There will also be Saint Patrick's Day food from Food Truck Eddy. 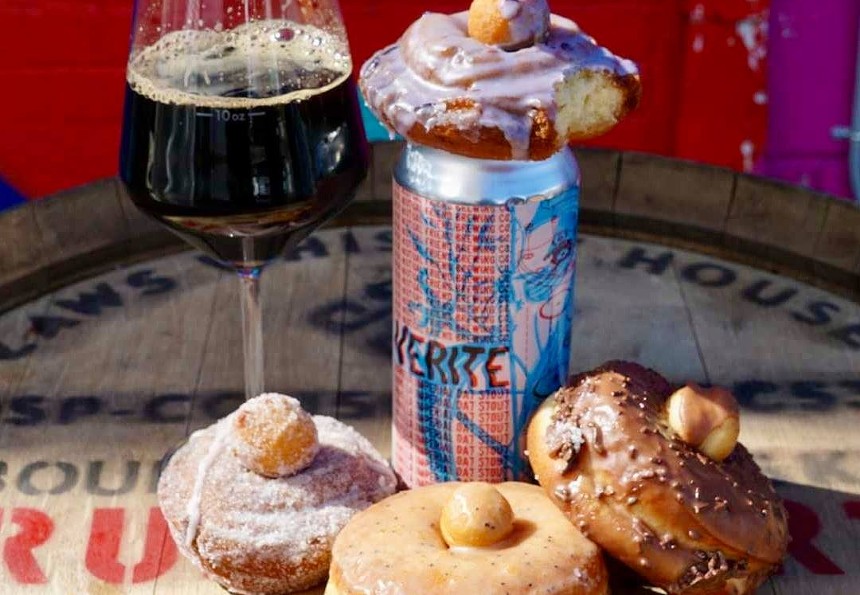 Tuesday, March 23
The annual return of Ska Brewing's warm-season Mexican Logger has become a big deal in Durango, and the brewery will celebrate all week with giveaways, merchandise and fun. If you are in Durango, call to reserve a table for $20 (which includes your first two pints). Proceeds go to the Community Emergency Relief Fund.

WeldWerks Brewing would be hosting a mega sixth-anniversary party today, but instead the Greeley brewery is noting this year's milestone with a special Sixth Anniversary Six-Pack, along with a Golden Ticket giveaway. The six-pack, which is available to buy online and will also hit distribution in Denver, includes three exclusive beers (Peanut Butter Achromatic, Coconut Achromatic and Extra Extra EXTRA Juicy Bits) and three crowd favorites (Advanced Fluid Dynamics, Blueberry Cobbler Berliner and Froot Camp Strawberry Banana). WeldWerks is also hiding ten Golden Tickets in random six-packs released from the taproom. "The lucky golden ticket recipients will receive one free bottle of every WeldWerks Barrel-Aged Beer Release for the next year, beginning with our March release through the end of 2021," the brewery says. "These golden tickets will only be found in the six-packs sold from our taproom."

Saturday, March 27
Westfax Brewing continues its five-year anniversary celebration by releasing three cans: Triple Hazy IPA, Mango Cilantro Gose and a Vienna lager made with kveik yeast. There will also be two small-batch releases, a keep-the-glass deal, and food from Basic Kneads.
KEEP WESTWORD FREE... Since we started Westword, it has been defined as the free, independent voice of Denver, and we'd like to keep it that way. With local media under siege, it's more important than ever for us to rally support behind funding our local journalism. You can help by participating in our "I Support" program, allowing us to keep offering readers access to our incisive coverage of local news, food and culture with no paywalls.
Make a one-time donation today for as little as $1.