What We're Craving for Takeout and Delivery This Week

Angry Chicken's wellbeing platter packs a ton of flavor into a bright and healthy dish. Courtesy of Angry Chicken/Facebook
This week's takeout doesn't have to be the same boring pepperoni pizza you've been ordering since you were in college. Mix it up with Yucatecan specialties, Korean fried chicken and upscale cuisine that crosses international borders while traveling well on your drive home. Here's what we're craving this week: 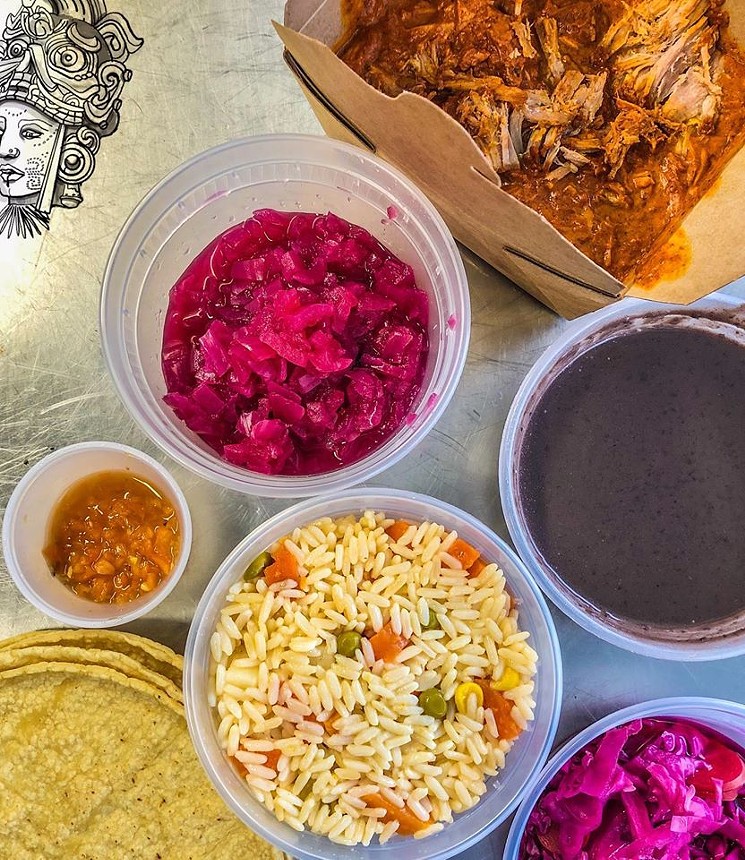 Cochinita Pibil for two, plus all the sides.
Courtesy of X'Tabai Yucateco

3742 Morrison Road
culturachocolate.com/risewestwoodcollective.html
How does a pound of succulent cochinita pibil (the slow-roasted pulled pork of Yucatan tradition) complete with rice, cabbage, black beans, escabeche onions, nixtamal tortillas (the best kind), two salsas and lime, sound for dinner on Friday night? You can get the two-person meal for only $20 at the newly formed Rise Westwood Collective if you pre-order for curbside pick-up or request delivery for $5 more. The X'Tabai Yucateco food truck is making the cochinita pibil, but there are plenty of other offerings from the collective, including fresh flour or corn tortillas from Mixteca, espresso drinks from Cabrona Coffee, chocolates from Cultura Craft Chocolate, family-sized meal packages from Four Directions Catering, jars of homemade salsas from the Mujeres Emprendedoras Coop, and mole and posole from Kahlo's. The Rise Westwood Collective only gathers on Fridays, though, so make sure you get your order in or you'll have to wait until next week.

4058 Tejon Street
720-456-6705
thewolfstailor.com
exploretock.com/wolfstailor
While chef/restaurateur Kelly Whitaker's Dry Storage has been open for business in Boulder, the Wolf's Tailor in Sunnyside has been closed since March 17. But this week service kicks off again, with a tight list of small plates and entrees and a nightly dinner special for two. Saturday night, for example, sees a full rack of St. Louis ribs with an assortment of sides. Don't expect old-school barbecue, though; the Wolf's Tailor seldom goes by the book. Instead, these ribs will be coated in a honey-chile glaze and sided with miso buttered sweet potatoes, jasmine rice congee and grilled broccolini. Check the full menu on the restaurant's website, then reserve a pick-up time on Tock by noon the day you want to pick up dinner. Make sure you scroll down far enough on the Tock order form to find cocktails and bulk items like bread, butter, flour, salt, yeast and sourdough starter.

Angry Chicken's wellbeing platter packs a ton of flavor into a bright and healthy dish.
Courtesy of Angry Chicken/Facebook

1930 South Havana Street, Aurora
303-353-2680
angrychickenco.com
Wings are quintessential takeout grub, and Aurora's Angry Chicken is among the best at serving up crackly, flavorful flappers with bold and spicy sauces. The secret to this Korean fried chicken is a rice-flour batter, so the coating stays crunchy even on a car ride home — and it's also gluten-free. Choose from fried or baked bird and six different sauces, then add mac and cheese, fries, mashed potatoes or corn salad to make it a meal. If deep-fried sounds a little heavy this week, go with the boneless roast "wellbeing" chicken platter, which comes with a mound of raw vegetables, sliced chicken (the skin is still amazingly crackly) and circles of daikon radish sliced paper thin to use as wraps. The spicy soy or honey garlic sauces go great with this platter. Drinks are also available from Angry Chicken's bar menu. The restaurant is currently offering delivery, but get 10 percent off your order if you call in for pick-up.
KEEP WESTWORD FREE... Since we started Westword, it has been defined as the free, independent voice of Denver, and we'd like to keep it that way. With local media under siege, it's more important than ever for us to rally support behind funding our local journalism. You can help by participating in our "I Support" program, allowing us to keep offering readers access to our incisive coverage of local news, food and culture with no paywalls.
Make a one-time donation today for as little as $1.