Fermentable Sugar
Socializing with friends, family and co-workers is often accompanied by indulging in an alcoholic beverage — especially in Denver, a city with a strong drinking culture. But for those who abstain, the sober-curious or anyone who just needs a break from booze, alcohol-free options abound these days. Now, skipping a buzz doesn't mean just sipping tonic with lime or a Diet Coke.

Here are fifteen locally made non-alcoholic drinks to add to your list:

Dos Luces Brewery's Chicha Morada
Westword's pick for the best non-alcoholic beer in 2020 is now available nationwide. Chicha Morada is an antioxidant-rich, gluten-free craft soda brewed with purple corn and traditionally enjoyed in Peru. Sweetened with panela (unrefined whole cane sugar), the fruity concoction has the addition of cinnamon, clove and Peruvian lime juice. Bonus: Each bottle is only 94 calories.
Where to find it: Available on tap and in bottles at Dos Luces Brewery as well as Amazon and bevv.com.

CERIA Brewing Non-Alcoholic Beers
Arvada-based CERIA Brewing Co. was founded when Keith Villa, creator of Blue Moon, decided to use his Ph.D. in Brewing Sciences to create non-alcoholic beers instead. The brewery produces two types of alcohol-free beer (as well as a version with THC and CBD, available at local dispensaries). Grainwave Belgian-Style White Ale is unfiltered and brewed with blood orange peel and coriander; it pairs well with spicy dishes, Mexican food and vanilla desserts. Indiewave West Coast IPA is brewed with Cascade, Citra and Amarillo hops, and is great with charcuterie, Middle Eastern food and chocolate desserts.
Where to find it: CERIA beer can be found at liquor stores throughout the Front Range. Check out the brewery's product finder to locate. The beer is also available on Amazon. Grüvi's two non-alcoholic wines include one similar to prosecco and one similar to a rosé.
Grüvi
Grüvi Alcohol-Free Wine
Denver-born Gruvi launched a line of non-alcoholic wines and beers to “help others be healthy and stay social, one drink at a time," according to its mission statement. The Dry Secco is a delicate, dry sparkling prosecco that pairs with charcuterie boards and creamy pasta. The Bubbly Rosé is a light-pink effervescent drink with notes of green apple and fresh strawberry; try it with chocolate-covered strawberries. Grüvi also has beer options including an IPA, pale ale, stout and sour weisse.
Where to find it: You can find Grüvi products at various liquor stores and Whole Foods locations. Check out the brand's product finder to locate. Hoplark teas have varying levels of hoppyness.
Hoplark HopTea
Hoplark HopTea
The idea for Hoplark HopTea came when the creators missed the craft-beer experience while finishing up a month of not drinking alcohol. The sparkling hopped tea comes in varying levels of hoppyness, but without the alcohol of beer. The original line of teas, from most hoppy to least, include The Citra Bomb One, The Really Hoppy One, The Green Tea One and The Calm One (which is also caffeine-free). Hoplark also produces a non-alcoholic line of hopped sparkling water, made with no sugar, and some limited-release specialty teas.
Where to find it: Hoplark's HopTea is available throughout Colorado, including Whole Foods, King Soopers and select liquor stores. Currently, the sparkling water is only available online. Check out Hoplark's product finder to locate.

Bootstrap Brewing Co. Non-Alcoholic Beer
Bootstrap Brewing Co. released two non-alcoholic beers to add to its award-winning beer lineup, each coming in at less than 0.5 percent ABV. The light Strapless Non-Alcoholic Gold is only 55 calories, while the gluten-reduced Strapless Non-Alcoholic IPA is described as a full-bodied IPA. The 100-calorie beer won silver at the 2021 USA Beer Ratings and bronze at the 2020 U.S. Open Beverage Competition.
Where to find it: You can find the non-alcoholic beer at the brewery, located at 142 Pratt Street in Longmont. You can also find it at various liquor stores throughout Colorado. Frescos/Instagram
Frescos Naturales
This company took home the top prize at the 2021 Naturally Boulder Pitch Slam Competition for Colorado-made organic and natural products. Frescos are all-natural, low-sugar drinks inspired by co-owner Juan Ignacio Stewart’s experiences growing up in Guatemala. There are several varieties of this sparkling Latin drink, which only uses real fruit, flowers and plants including hibiscus, tamarind, pineapple, passion fruit, guava and mango.
Where to find it: Use the product finder to find locations near you, or order online.

Coors Edge Non-Alcoholic Beer
Golden-based Coors Brewing Company has launched Coors Edge, which comes in at less than 0.5 percent ABV and 45 calories per can. It's available in cans and bottles in both six-packs and twelve-packs. The beer is an American lager, described as having a well-balanced, malty body and notes of citrus and light spiciness from the hops.
Where to find it: Check out the product finder for retail locations.

Horsetooth Hot Sauce Bloody Mary Mix
Family-owned Horsetooth Hot Sauce has been making its spicy sauces in Fort Collins since 2008. For an alcohol-free twist on a morning go-to, try one of the two flavorful Bloody Mary mixes that can stand on their own without the addition of booze. The purée consists of the company's Rubin’s Red hot sauce, tomatoes, vegetable juice, Worcestershire sauce, horseradish, lime juice, celery salt and more. The Dog That Bit You is the original mix, and The Wake Up Call is the spicy version, made with Rubin’s XXX sauce.
Where to find it: Use the brand's product finder for locations. 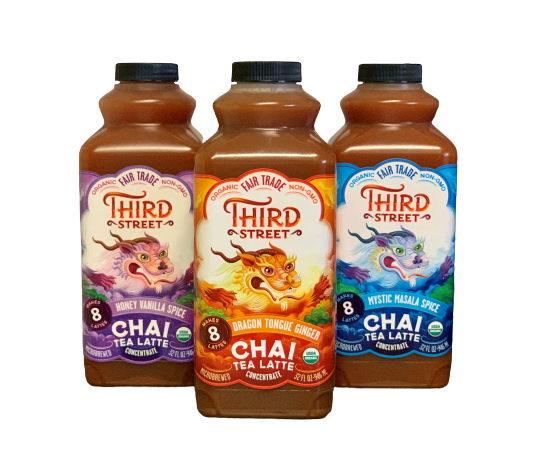 Third Street
Third Street Teas
Boulder-based Third Street makes small-batch microbrewed teas. The 32-ounce chai tea concentrates make eight lattes and are available in Honey Vanilla Spice; Mystic Masala Spice, with ground herbs and ginger; and Dragon Tongue Ginger, made with black tea, warm spices and grated ginger. The company also produces bottled lemonades and teas as well as iced tea concentrates. All of the ingredients used in production are composted for local farms in Boulder County, and Third Street's facilities are 100 percent wind-powered.
Where to find it: Third Street is available at various grocery stores, including Whole Foods, and select products are available on Amazon.

Wellness Tea from the Boulder Dushanbe Teahouse
The Boulder Dushanbe Teahouse serves more than 100 premium teas along with lunch, dinner and, of course, afternoon tea. But if you can't make it inside, you can still enjoy all of the various types of tea, including their line of wellness herbal teas, which are blended and designed by a master tea blender and certified herbalist. There are 23 different types of wellness tea blends, including Cough Calmer, Tender Tummy, Tranquility Tea and Elderberry Ginger Antiviral.
Where to find it: You can enjoy any of the teas at the teahouse, 1170 13th Street in Boulder, or order online. 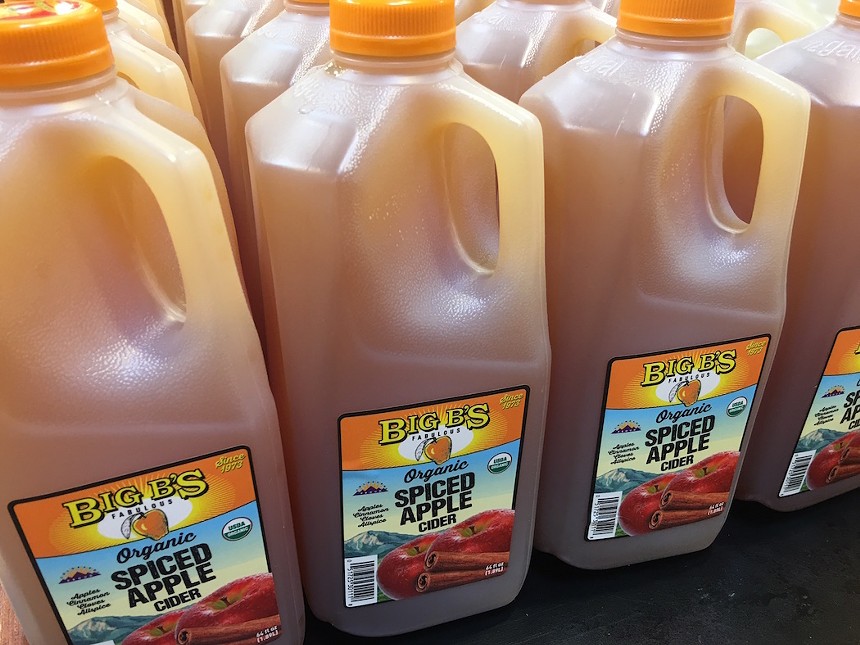 Colorado proud Big B's Spiced Apple Cider is a party favorite.
Wendy Nakajima
Big B’s Juice
In addition to alcoholic hard cider, Big B’s makes slow-pressed, small-batch organic juices. The drinks, crafted in Hotchkiss, are unfiltered and a blend of both sweet and tart apples for a balanced flavor. With an addition of other fresh ingredients, varieties include Apple, Ginger Apple, Cherry Apple, Peach Apricot, Pear Apple and Spiced Apple. Big B’s also makes a variety of lemonades: Original, Lemonade and Ice Tea, Hibiscus Pomegranate Lemonade, Matcha Mint Lemonade, and Lavender Lemonade.
Where to find it: Visit the orchard at 39126 Highway 133 in Hotchkiss, or look for it in retail locations throughout Colorado.

Kure’s Ginger Beer
Loveland-based Kure’s Craft Beverage Co. makes three alcoholic canned cocktails, but it also produces an alcohol-free canned ginger beer made with real ginger and cane sugar, at 100 calories per can. While it can be used as a mixer for traditional cocktails, its robust, fresh flavor can also stand alone or be mixed with juice for a mocktail.
Where to find it: Use the store locator on Kure's website to find out where cans are available near you. Joe Friend
Oliko’s Cultured Ginger Beer
This small-batch ginger beer is made with live cultures and Peruvian ginger, with no artificial colors. Since it’s cultured, similar to kombucha, drinks are tested to ensure they are under 0.5% ABV. In addition to classic ginger from the Boulder-based business, other available flavors include blackberry mint, apple cardamom and carrot turmeric. The ginger beers are naturally vegan and gluten-free.
Where to find it: Oliko is found at a variety of retail locations throughout Colorado.

Rocky Mountain Soda Co.
Denver-based Rocky Mountain Soda Co. has been creating high-quality soda made with sparkling Colorado water, vegan cane sugar, natural flavor extracts and non-GMO citric acid since 2007. Available in both cans and bottles, its small-batch flavors include Breckenridge Blackberry, Colorado Cola, Buena Vista Blackcherry, Golden Ginger Beer, Evergreen Elderberry, Loveland Lemon Limeade, Grand Mesa Grape, Old Centennial Orange Cream, Palisade Peaches and Cream, Boulder Birch Beer and Pikes Peak Prickly Pear.
Where to find it: Available at Whole Foods, Sprouts, King Soopers, Lucky’s Market and many breweries and restaurants throughout Colorado. For a list of retailers, visit its website.
KEEP WESTWORD FREE... Since we started Westword, it has been defined as the free, independent voice of Denver, and we'd like to keep it that way. With local media under siege, it's more important than ever for us to rally support behind funding our local journalism. You can help by participating in our "I Support" program, allowing us to keep offering readers access to our incisive coverage of local news, food and culture with no paywalls.
Make a one-time donation today for as little as $1.
Kristen Kuchar is a Colorado writer covering dining and the beverage industry, including wine, beer, cider and spirits. Her articles have appeared in VinePair, the Beer Connoisseur, Beer Advocate, Craftbeer.com, Zymurgy and more. She has a WSET Level 1 certificate and is a Certified Beer Server by the Cicerone Certification Program.
Follow:
Twitter: @KristenKuchar
Instagram: @kristen_kuchar/