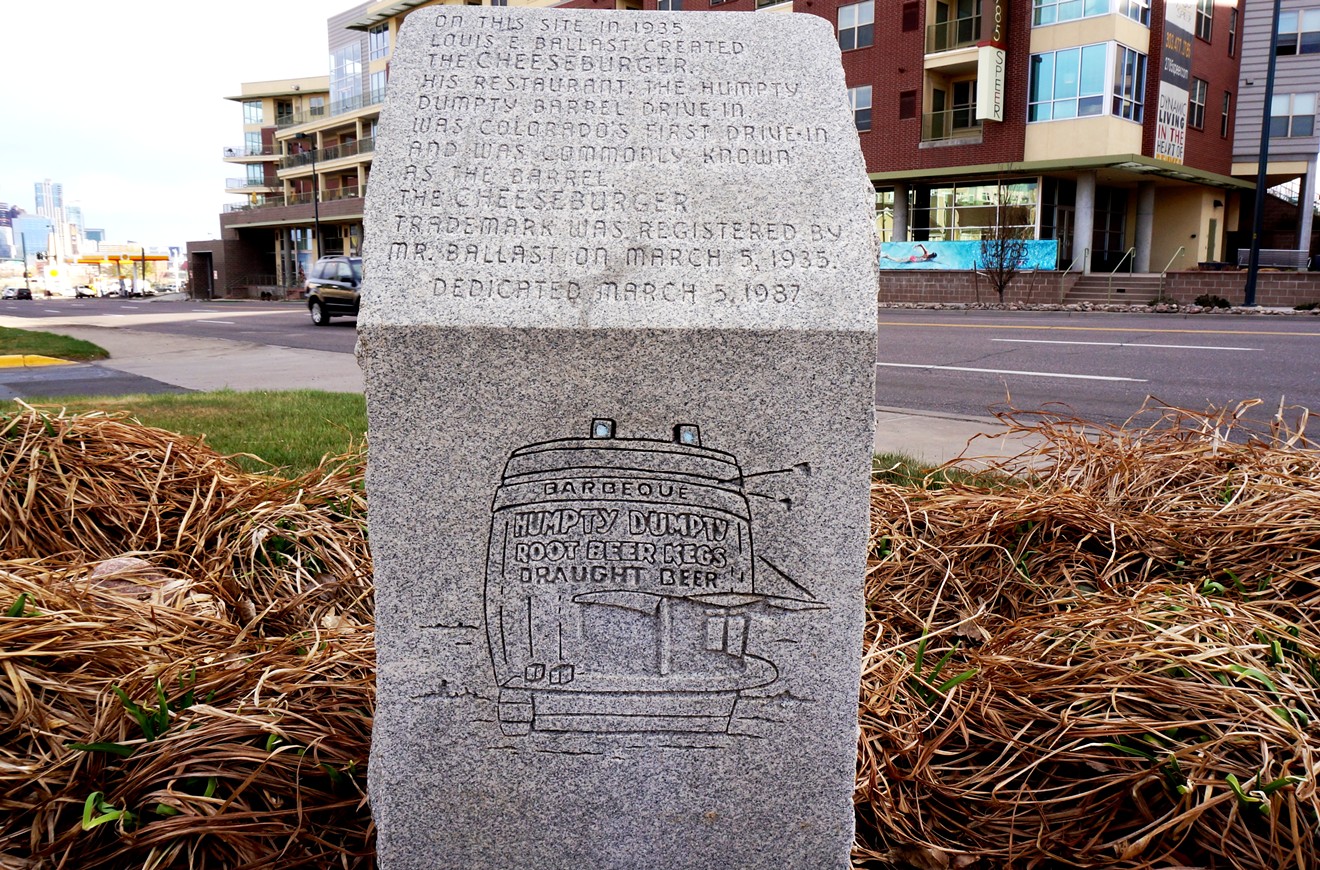 The cheeseburger shrine at 2776 Speer Boulevard is now part of the landscaping at a Key Bank branch. Mark Antonation
National Cheeseburger Day won't return until September, but every day is cheeseburger day in Denver. The Mile High City can claim at least partial credit for the idea to melt cheese on top of a burger patty, since Louis Ballast, owner of the Humpty-Dumpty Barrel drive-in burger joint, trademarked the word "cheeseburger" in 1935. Don't believe us? There's a monument to Ballast and his drive-in (which he also called the first in Denver) at 2776 Speer Boulevard, where the Humpty-Dumpty once stood.

In honor of that long-gone burger shack, here are seven old-school joints where cheeseburgers are still made in a way that Ballast would have approved. 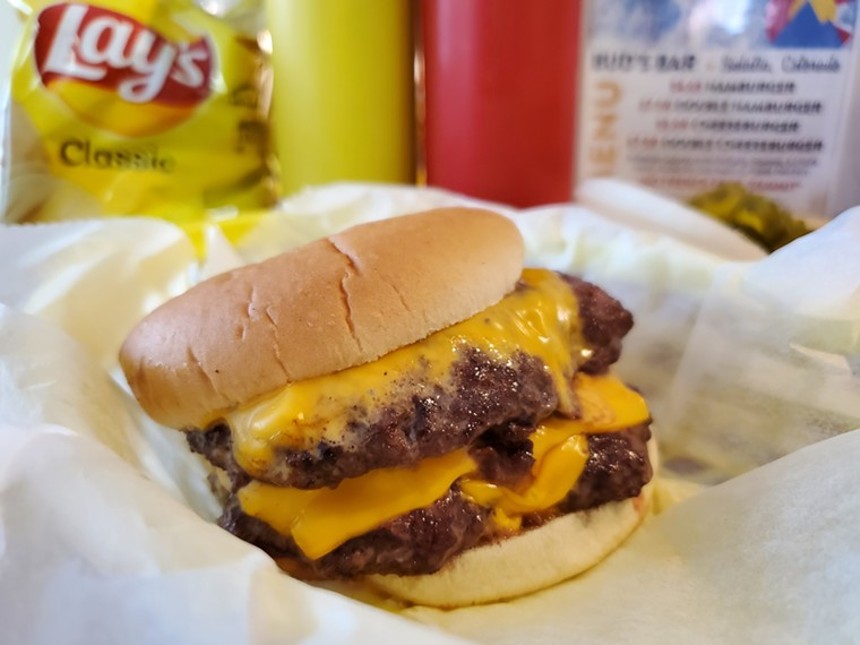 5453 Manhart Street, Sedalia
303-688-9967
Since 1948, Bud's has been a favorite stop for bikers, autumn leaf-peepers and folks just looking to get away from the city for a bite and a beer. What you'll get is a compact, drippy cheeseburger on a squishy bun that barely contains the greasy goodness within. What you won't get: fries. If you need a side, grab a bag of Lay's — or another beer.
click to enlarge 6657 South Broadway, Littleton
303-798-5981
The building that houses the Castle Bar & Grill was once a drive-thru restaurant specializing in casseroles, until someone realized what a bad idea that was and turned the place into a bar. Cheeseburgers are now the main draw, along with other pub fare, a sunken bar and a wall of beer mugs for regulars. 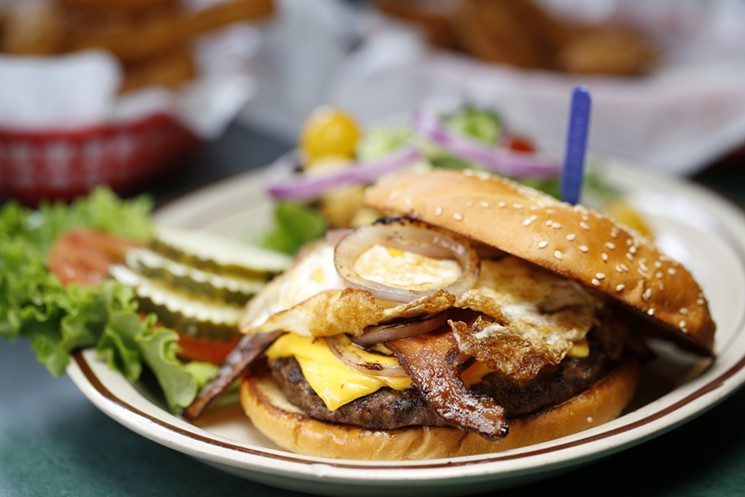 2641 East Second Avenue, 303-322-7666
2220 Blake Street, 303-297-3644
Over its almost eight decades, the Cherry Cricket has morphed from smoky bar to burger institution. And in 2018, the local legend finally outgrew its birthplace and expanded by opening a second outpost in the Ballpark neighborhood. Luckily, the burgers didn't suffer in the move: The smoky, char-grilled patties taste just as good in their new digs, and the lengthy list of toppings with which you can personalize them hasn't been edited. These burgers still taste the way they did when you were growing up. 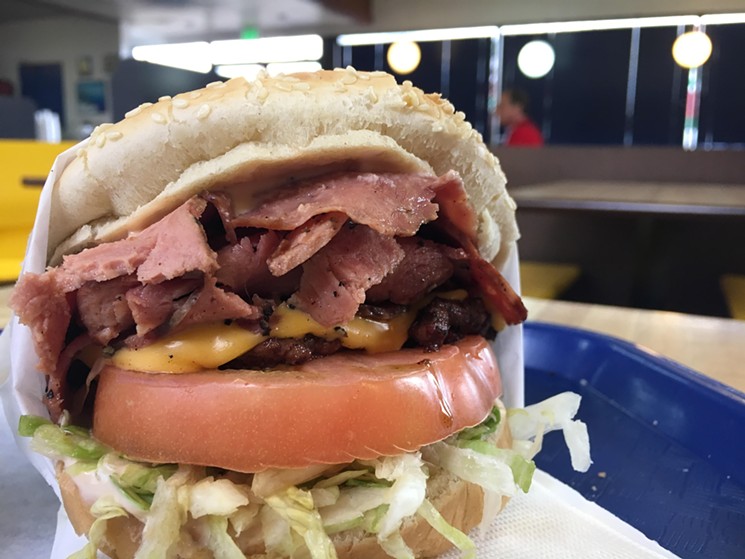 Yes, there's a burger patty somewhere under all the pastrami on Crown Burger's Royal.
Mark Antonation

2192 South Colorado Boulevard
303-753-9696
Crown Burgers is one of Denver's last remaining homegrown fast-food eateries, complete with a drive-thru and a list of burgers that range from simple to silly. For a pure taste of nostalgia, the Junior cheeseburger does the job, but on the opposite end, there's the Royal, stacked with pastrami in addition to all the standard burger toppings. Call yourself the king if you can handle this one. 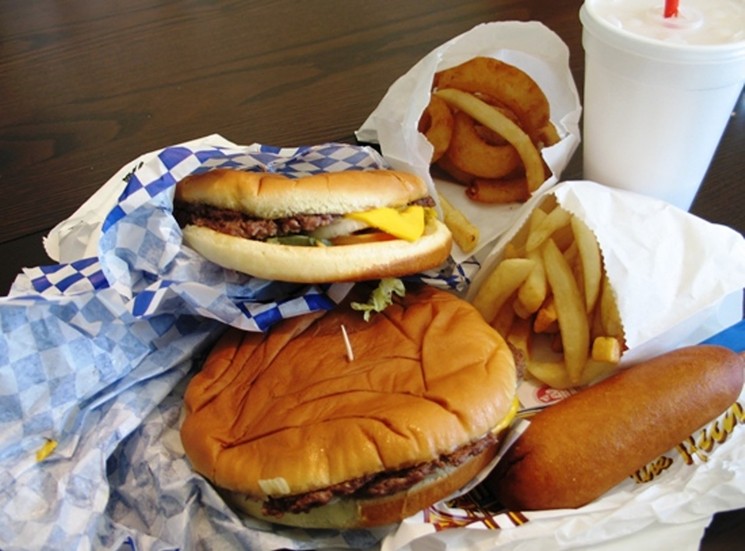 Grandpa's has been drawing lines of fans since 1953.
Mark Antonation

23 South Federal Boulevard
303-936-4463
This walk-up burger stand, with only a sheltered order window and a couple of picnic tables outside, has no website, no Facebook page and no drool-inducing burger photos on Instagram. Since 1953, Grandpa's Burger Haven has been serving big, floppy, sloppy cheeseburgers wrapped in blue-and-white checkered paper. There's a good reason why the sign outside reads "#1 on the big big bun." 7855 Sheridan Boulevard, Westminster, 303-429-5258
595 East 88th Avenue, Thornton, 303-430-8021
The burgers have been sizzling at Jim's Burger Haven for the past 61 years, and things haven't changed much at this Westminster original. A six-inch bun is the star attraction; you can get it stacked with one, two or three patties, each with its own slice of cheese — and the biggest one rings in at just $7.50. 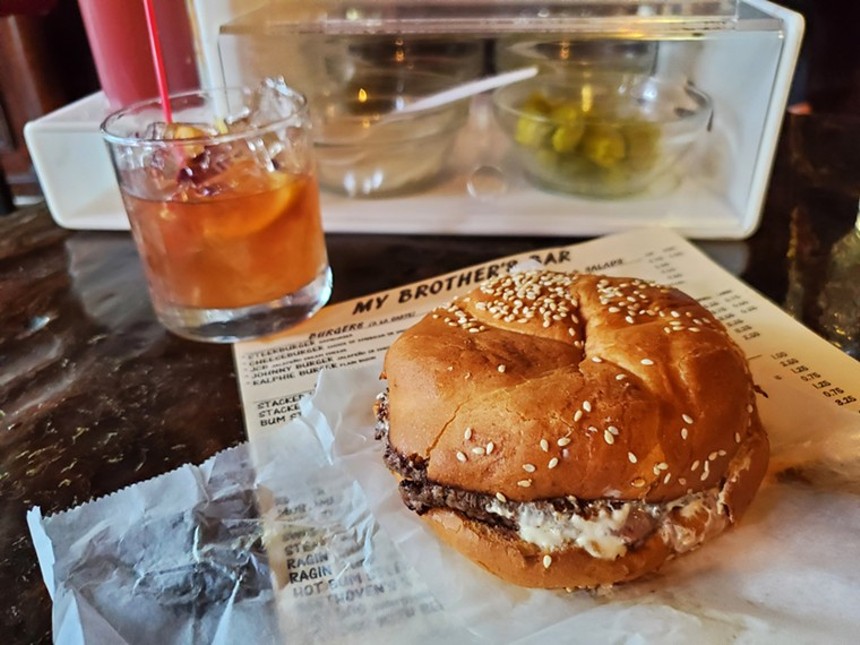 2376 15th Street
303-455-9991
More than a century of folklore and burger grease permeate the atmosphere at My Brother's Bar, but beyond the legends of beatnik writers and bootlegged booze during Prohibition, the corner bar is still just a great place to relax and enjoy a cheeseburger, even if it's made with cream cheese instead of American (although you can get that too). Back after a pandemic hiatus: the condiment caddy that appears alongside you  greasy, parchement paper-wrapped meal.
KEEP WESTWORD FREE... Since we started Westword, it has been defined as the free, independent voice of Denver, and we'd like to keep it that way. With local media under siege, it's more important than ever for us to rally support behind funding our local journalism. You can help by participating in our "I Support" program, allowing us to keep offering readers access to our incisive coverage of local news, food and culture with no paywalls.
Make a one-time donation today for as little as $1.