Southern-style fried chicken and sides at the Blazing Chicken Shack II. Molly Martin
"I quit my day job to smoke pot and eat food," says Kip Wilson, a Mississippi native who moved to Denver in 2011 and started the Stoned Appetit podcast in 2018 with friend and co-host Chris Byard. In early April, Wilson officially left his corporate job in tech sales to focus on the podcast's mission full-time.

"What I actually felt was that the social media influencers in our community were doing a disservice to the independent restaurateurs and small-business owners," he explains. "Seeing folks do Federales reviews...when we have local entities and people who have fought through COVID, who lost their jobs and started their own companies in their kitchens. And then we have pricks that are real estate agents from Chicago come in, and now because a PR company gives you free tacos, you suck their dick online. It drove me crazy."

With its growing audience, particularly on Instagram (@stoned_appetit), Wilson is now ready to expand Stoned Appetit's reach by telling more stories about independent small businesses in Colorado in both the hospitality and cannabis industries. "I'm afraid the social media scene has gotten pretty absurd, so we're going to correct that," he adds.

Last August, Wilson shared ten of his favorite stoner eats in town with Westword. Now, just in time for 4/20, he's serving up ten more of his most recent finds across the metro area. "These aren't in the regular stratosphere," he says. "A lot of people go out to eat downtown or in RiNo, so I tried to get off the beaten path and give folks some gems in other areas."

Because whenever or wherever the munchies hit, you need to be prepared. Here are Wilson's ten favorite stoner eats right now: 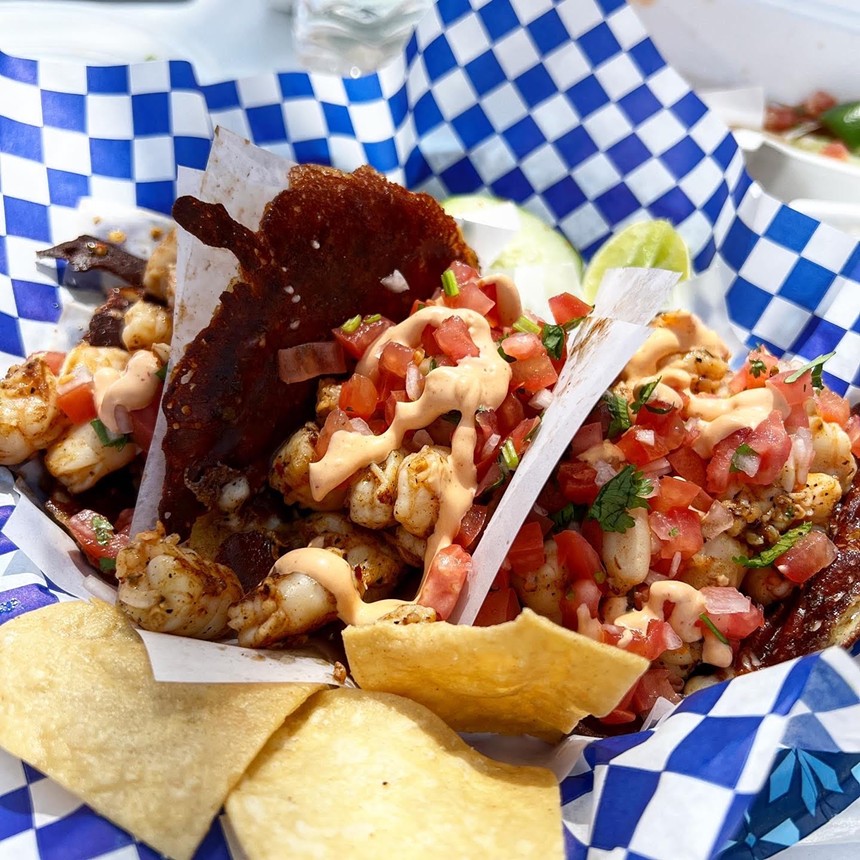 El Zarandiao's tacos are a stoner's dream.
Kip Wilson
El Zarandiao
Chambers Road and East Colfax Avenue, Aurora
720-500-3139
instagram.com/elzarandiao
"It was the best taco I've had in Denver. It was revolutionary," says Wilson of the shrimp taco at this food truck owned by Cristian Lutz, which you can find Saturdays and Sundays at what's known as Aurora's "flavor corner" in the VASA Fitness parking lot. Fresh tortillas handmade in the back of the truck are topped with a layer of griddled cheese, and then Lutz and company "fill it to the brim" with shrimp, pico de gallo and a spicy sauce that Wilson calls "banger sauce." The area is packed with vendors of all kinds, making a stop here a full-on, budget-friendly stoner outing. "I bought a soccer jersey, a Gucci handbag and five shrimp tacos for $20, and I was like, 'I'm winning! I'm winning!'" Wilson recalls. The Hollywood Frank at Yacht Club.
Kip Wilson
Yacht Club
3701 Williams Street
yachtclubbar.com
Industry pros Mary Allison Wright, husband McLain Hedges and brother John David Wright opened Yacht Club next door to Brasserie Brixton in December, where they're serving more than just (really, really good) cocktails, natural wine and boozy shaved ice. "You get the classy and the cocktails, and then you get this guilty-pleasure, gluttonous little snack," Wilson says of Hollywood Frank's, Yacht Club's in-house hot dog operation. There are several topping options  — "Most are cold, but they'll heat up some chili for you," Wilson notes — and each of the dogs is served with a bag of Lay's. "It's just a fun, casual eat," he notes. "A perfect stoner snack if you want to have a nice, fun frozen banana daiquiri and a hot dog on their patio as it gets nicer." The mushroom toast at Brasserie Brixton is a must.
Kip Wilson
Brasserie Brixton
3701 Williams Street
720-617-7911
brasseriebrixton.com
You don't have to venture far from Yacht Club for Wilson's next pick — French eatery Brasserie Brixton is so close, the two share an address (though they are separated by a wall). Being high only heightens the fun of fine dining, and here, one dish in particular won Wilson over: the porcini mushroom toast. "This is the dish for our vegetarian stoners," he offers. "It's got a creamy sauce that keeps it all together, and then it's on fresh fucking bread. And the bread is obviously great — you can order it with butter, and I'm a bread slut, so I do — but when they top it with decadent mushrooms, it's possibly one of the best things I've eaten in 2022." After that shrimp taco, he adds. 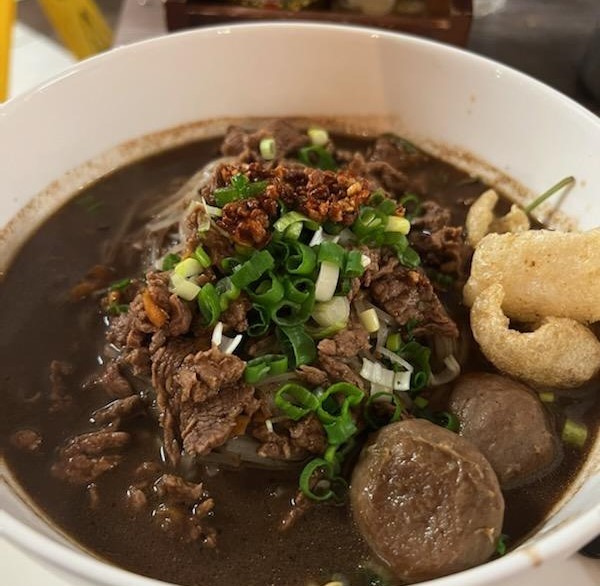 The Floating Market Noodle Soup at Farmhouse Thai is deeply flavored.
Kip Wilson
Farmhouse Thai Eatery
98 South Wadsworth Boulevard, Lakewood
303-237-2475
farmhousethaieatery.com
"This is a place that's going to blow your socks off if you're looking for the heat. Anything above a two..." Wilson says, laughing. "It'll knock your dick in the dirt. It's so spicy, it's so delicious." With a friendly price point and options ranging from curries to a pineapple fried rice with a sweet edge to counter the heat, Wilson says you can't go wrong at this casual spot. "It made my brother cry," he recalls. "He was crying-laughing, saying, 'It's just so hot, it's so good!'" Follow Samosa Shop on Instagram to find out where Dave Hadley is cooking.
Kip Wilson
Samosa Shop
Pop-Up
samosashop.co
Chef Dave Hadley has made appearances on television shows Chopped and Supermarket Stakeout, but fame hasn't stopped him from cooking up stellar eats at his Samosa Shop, which has been popping up at farmers' markets and other events since the summer of 2020. "He makes all kinds of samosas and other great dishes, but his Buffalo chicken samosa is a stoner's delight," Wilson says. "It's almost like a hand grenade of flavor. It's coated in Buffalo sauce, but on the inside is like a creamy chicken buffalo dip. And Dave's done some work in the stoner kitchen scene as well, so he knows how to channel those tastebuds. Heavens!" 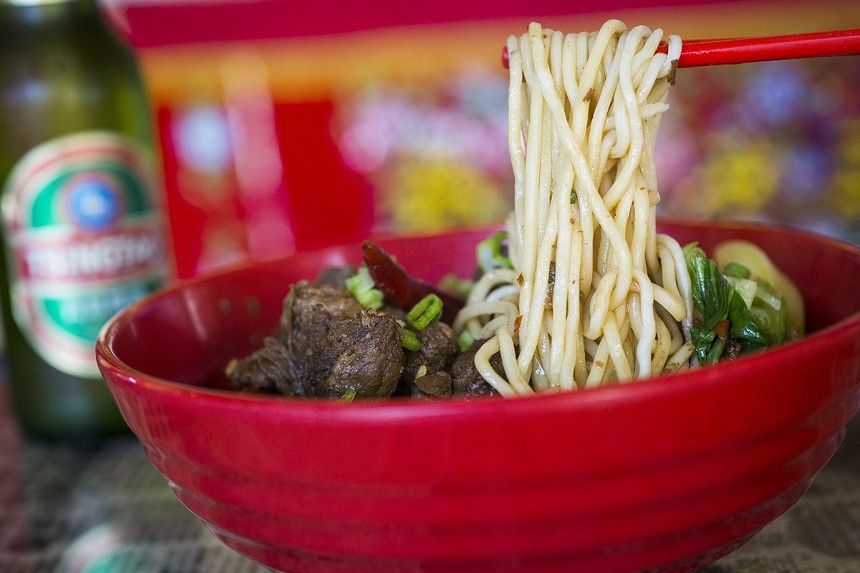 Dig into house made noodles at Zoe Ma Ma.
Danielle Lirette
Zoe Ma Ma
1625 Wynkoop Street
303-545-6262
zoemama.com
Its original location is in Boulder, but Wilson loves the Union Station outpost of this fast-casual spot from James Beard-nominated restaurateur Edwin Zoe. "It's perfect for a commuter snack, if you're about to puff tough and get on the train," he suggests. The Denver location's been open since 2014 and can sometimes get lost in the mix of the ever-changing neighborhood, but it's a spot that deserves to be frequented for favorites like dan dan noodles and bao buns. "Grab a little chili oil on your way out," Wilson adds. Zoe is opening Dragonfly Noodle on the 16th Street Mall possibly as early as May, so soon there will be two spots in the Mile High to enjoy his tasty eats, whether you're high or not. 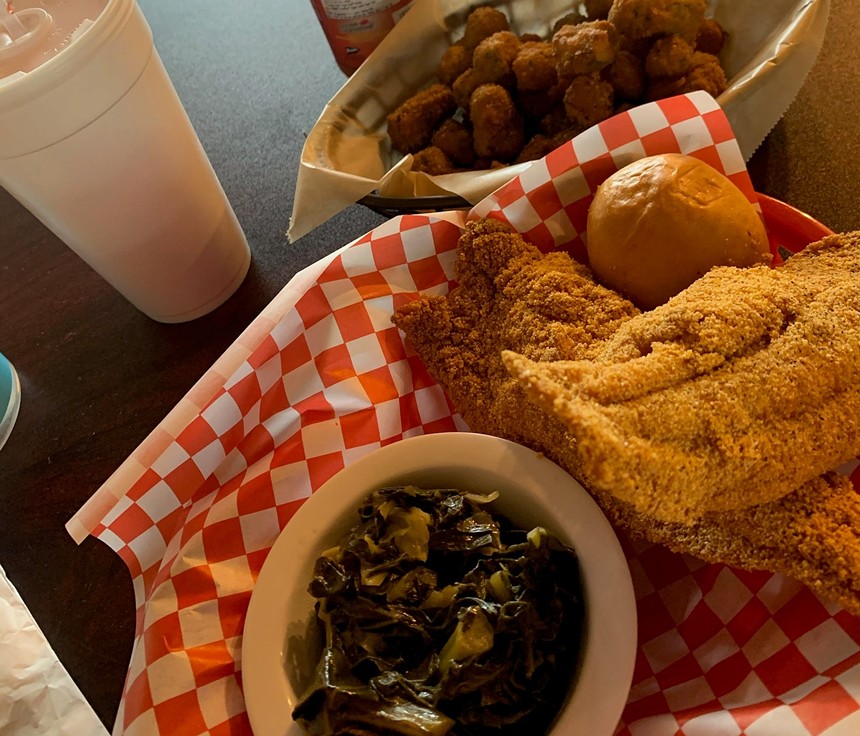 Blazing Chicken Shack II is a hidden gem for Southern comfort food.
Kip Wilson
Blazing Chicken Shack II
5560 East 33rd Avenue
720-596-4501
blazingchickenshackii.com
While 4/20 is now celebrated all over the globe, its roots are in the U.S., and Wilson's paying homage to that with a spot that specializes in some American classics: Blazing Chicken Shack, his current go-to in Park Hill. "They have fried catfish that are the size of your forearm, and their fried chicken is exceptional," he says. "The two ladies behind the counter are as sweet as can be, and they're spitting out dank soul-food Americana eats. When you get high, you want that soul-food, lay-in-the-couch kind of snack." Split Lip's slugburger is messy in all the right ways.
Molly Martin
Split Lip
3560 Chestnut Place
splitlipeatplace.com
"I think most folks know that Number Thirty Eight has a killer outdoor vibe," says Wilson of the RiNo venue where pandemic startup Split Lip serves its crave-worthy eats. The crew behind Split Lip began slinging Mississippi slugburgers — "Shoutout to my OGs," says Mississippi native Wilson — on the Ultreia patio during the first restaurant shutdown, but now they're all in on the venture at Number Thirty Eight. While the menu has expanded, the original Split Lip crowd favorite remains a can't-miss. "It's just a sloppy burger topped with cheese and pickles, thin patties. And it's messy as the day is young," notes Wilson. "It's greasy, and it's just exactly what you look for in a local burger. I'm so high on them right now." Go for the two foot sandwich at Carmine Lonardo's.
Molly Martin
Carmine Lonardo's
7585 West Florida Avenue
303-985-3555
carminelonardosmeatmarket.com
Wilson was introduced to this old-school Italian market in Lakewood by AJ Shreffler, the chef behind the popular Little Arthur's Hoagie's pop-ups. "It's the hot peppers for me," Wilson says of the deli's classic Italian combo sandwich loaded with capicola, salami, pepperoni and ham on freshly baked bread. "I grew up in the Southeast, and the muffuletta olive spread was always a staple. But when you spice that up, and when they church that sandwich up...." The normal 8-inch will fill you up, but you can also opt for a 12-inch if the munchies are really hitting hard, or even the 24-inch, basically securing a second sandwich for your at-home sesh later. Plus, he adds, "you can pick up cannoli and cookies and cheesecake right there." The happy hour steak frites at Annette is one of the best deals in town.
Molly Martin
Annette
2501 Dallas Street, Aurora
720-710-9975
annettescratchtotable.com
Last month, Wilson introduced his Stoned Appetit March Madness restaurant bracket, pitting 64 of his favorite places to eat in Denver against each other in a friendly competition for a (literal) golden goat trophy. After thousands of votes via Instagram stories, it came down to a final showdown between Annette and Hop Alley. Caroline Glover, a 2022 James Beard finalist for Best Chef, Mountain, for her Stanley Marketplace eatery, came out on top by fewer than forty votes in the last few minutes of the competition. "We love it for its creative use of fresh ingredients, and you can see the smiles on the faces of the team because they're proud to be there," Wilson says. "It's a restaurant we're proud to be working with, proud to prop up, proud to give the golden goat trophy to." His favorite Annette eats? "It's the seasonal dishes," he responds, "but also the burger and the happy-hour steak frites for $17."

Open
3242 East Colfax Avenue
303-399-9703
opendenco.com
Located inside Goosetown Tavern, Open serves sandwiches created by some of Denver's top chefs. On the menu for 4/20: an amped-up take on a BLT that Wilson created with chef and restaurateur Amos Watts of the Fifth String. "We're using smoked pork belly, fried green tomato, greens and a little bourbon bacon jam so you double dip on the pork," Wilson explains.
KEEP WESTWORD FREE... Since we started Westword, it has been defined as the free, independent voice of Denver, and we'd like to keep it that way. With local media under siege, it's more important than ever for us to rally support behind funding our local journalism. You can help by participating in our "I Support" program, allowing us to keep offering readers access to our incisive coverage of local news, food and culture with no paywalls.
Make a one-time donation today for as little as $1.