Black Hawk hopes breweries and distilleries will complement its casinos. City of Black Hawk/Facebook
Colorado’s mountains have always been full of promise. Whether the goal was gold and silver, beaver pelts, ski resorts or casinos, people have climbed up into the hills to follow money, dreams and passions — or die trying.

The City of Black Hawk is no stranger to these impulses: Founded as a mining settlement during the gold rush of 1859, it gained the right to offer casino gambling — as did Central City and Cripple Creek — in 1991, and has since become a high-rise-studded resort town offering blackjack, roulette and slots.

But city leaders have another bet in mind, one that would play off of Black Hawk’s already adult-centered vibe while diversifying its economy and drawing in a different, perhaps younger demographic. And they’re willing to put a lot on the line — a lot of money — to turn it into a reality.

The project, called Artisans’ Point, is a mostly undeveloped 22-acre piece of land above town on Gregory Hill. But in the not-too-distant future, city officials and Mayor David Spellman would like to fill Artisans' Point with ten or so newly built small-batch distilleries and breweries, each producing its own liquid assets on site as part of a collective of adult-beverage companies. 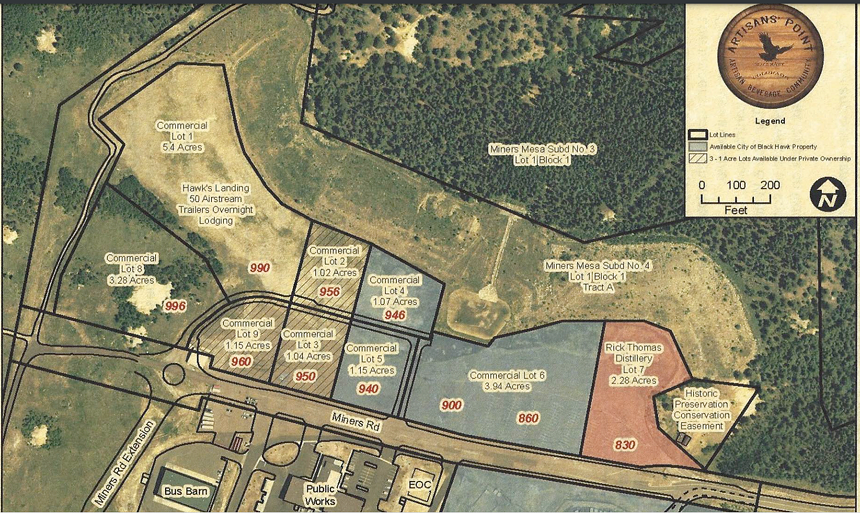 Artisans' Point will consist of eight to ten breweries and distilleries on 22 acres.
City of Black Hawk
The idea is to widen the city's tourism offerings as well as its tax revenue base — a notion that became more pressing after the pandemic closed the casinos for many months last year — but in a way that will “complement gaming and not be in competition with it,” Spellman says.

“As we turn into a resort destination where people are coming for two- or three-night stays, this might attract folks who might not necessarily want to sit at a slot machine,” he continues. And after getting their fill of whiskey and beer, they might choose to stay at one of the hotels and even play some of the newer casino games that are now legal, such as keno and higher-stakes baccarat.

Artisans’ Point would also serve as a gateway — an aperitif, even — to an even larger whiskey-themed adult playground just up the road: a twenty-acre, $50 million distillery resort envisioned by Proximo Spirits, the owner of Tincup American Whiskey, a brand that was created in 2014 as a sort of Colorado-themed sister to famed Colorado whiskey maker Stranahan’s, which Proximo also now owns.

Tincup will have its own distillery in Black Hawk.
Tincup American Whiskey/Facebook
Despite its branding, Tincup is actually made in Indiana — before being finished and bottled in Colorado, something that has drawn criticism from whiskey fans. So the Black Hawk project, called Lake Gulch Whiskey Resort, would remedy that problem while creating a regional, even national, tourist destination that could attract more than 60,000 people a year.

In addition to the distillery, that project — which will be built in three phases — could eventually include a restaurant and event space, an outdoor amphitheater and overnight lodging of some sort.

Proximo spokeswoman Jennifer Webb declined to comment, saying that it's too early to talk specifics, but the New Jersey-based company, which also owns or imports brands like Jose Cuervo, 1800 Tequila, Bushmills, Kraken and Three Olives Vodka, now owns more than 300 acres in Black Hawk, and in early 2020, another Proximo representative told the Denver Business Journal that there could also be retail stores, a hotel, camping, hiking trails, zip lines and even a farm on that land. 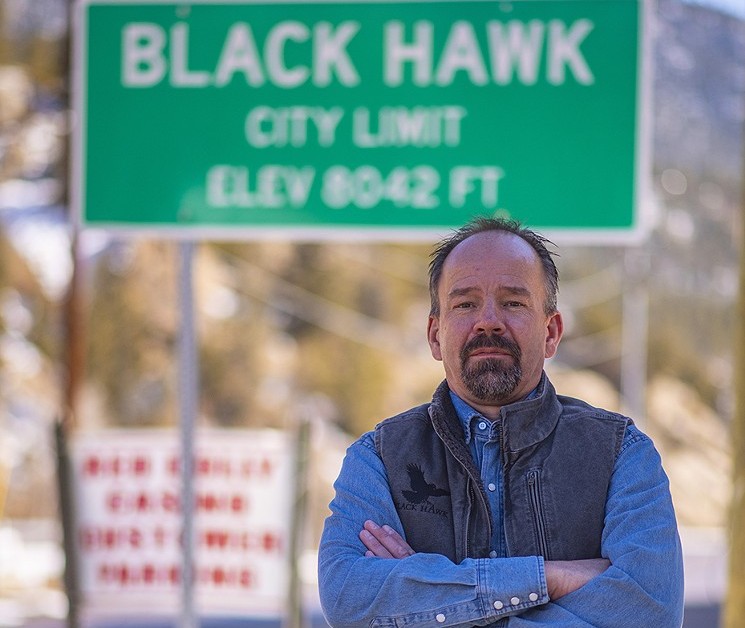 Black Hawk Mayor David Spellman.
Evan Semón
Construction for Lake Gulch probably won’t begin until late 2022 at the very earliest, but Black Hawk hopes to attract tenants for Artisans’ Point now — or at least pique their interest. To do that, the city is spending $6 million to bring water and sewer lines up to Artisans’ Point, and to pave or re-pave the roads. It has spent another $5 million upgrading its water tanks: Tincup itself will need at least 100,000 gallons a day in its first year alone, Spellman says, and could use up to 450,000 gallons a day in year three.

But here’s the fun part: The city owns 16 of the 22 acres at Artisans’ Point — and it wants to give that mountain land away for free to whomever agrees to build on the designated lots, which range from one to four acres. Black Hawk will also waive its water tap and water development fees, and offer tax rebates on construction materials, furniture, fixtures and equipment.

That offer could have an eye-opening value of $500,000 to $600,000 per building, says Brandon White, who owns Built Construction, a general contractor that has worked with at least two dozen breweries and distilleries in Colorado over the past eight years. Built broke ground in September on the first planned occupant of Artisans' Point, the Rick Thomas Distillery. Owned by former Black Hawk casino executive Brian Watts and his family, it will include a 6,903-square-foot distillery and taproom, and 5,000 square feet of barrel storage. The company plans to release its first Scotch-style whiskeys in 2023. 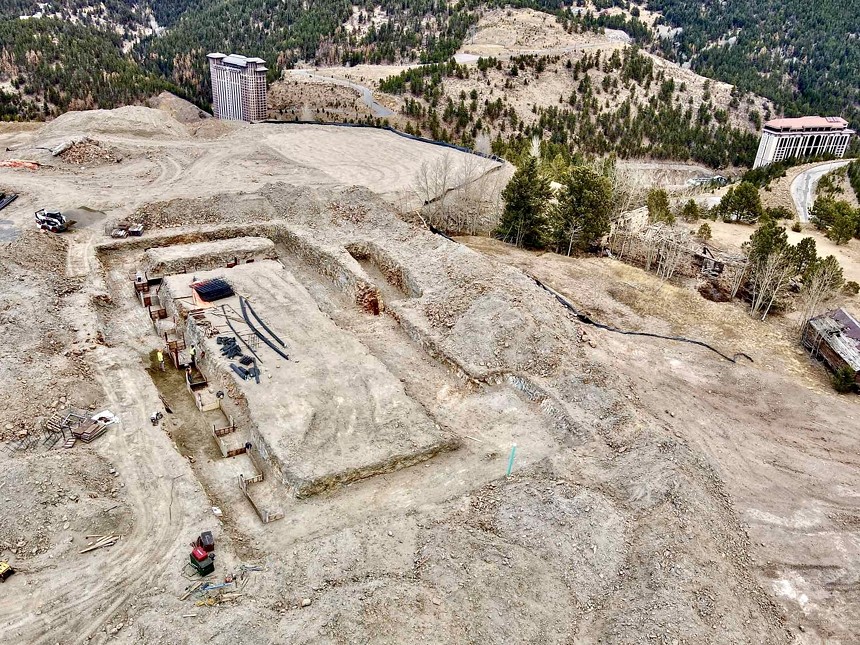 Built Construction broke ground on the Rick Thomas Distillery in September.
Built Construction
“Black Hawk is a really exciting and unique place, and tax revenues from the casinos allow the town to fund some really cool infrastructure and projects," White says. “They are doing way more than any other city or municipality would to get a group of businesses started like that.”

Of course, nothing in life, and especially in the high country, is truly free, and Spellman acknowledges as much. "Developing here in Black Hawk — it’s resort pricing when it comes to construction. That’s why we're helping with incentives," the mayor says.

So far, several breweries and distilleries have taken a look or shown some interest, but none — aside from the Rick Thomas Distillery — have yet to sign on.

One reason for that, says Sean Guerrero of Jade Mountain Brewery & Teahouse, is that Black Hawk may have overestimated what small manufacturers can afford to spend.

Although Guerrero was, and still is, excited about the potential in Black Hawk, and even has potential investors, he also thinks it's too much of a gamble to get involved at this early stage. “We looked at two acres, and we had a lot of cool ideas," like a small Chinese garden and temple, he says. 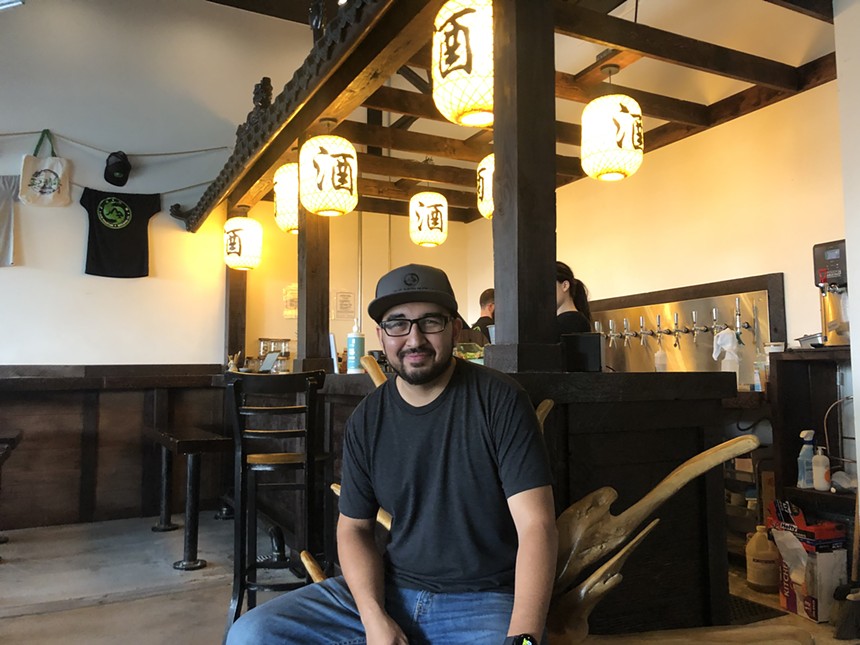 Sean Guerrero of Jade Mountain Brewery.
Jonathan Shikes
But he’s not sure that he’s ready to make the leap yet. “It’s hard enough just getting people from downtown Denver to Aurora,” he points out; the brewery’s existing location, which opened in May, is at 4233 South Buckley Road in Aurora. "We would be up there by ourselves until Tincup opens, and there’s no beer scene there. It’s hard to find any craft beer at all in the casinos.”

Guerrero estimates that it would cost around $3 million to build a brewery or distillery in Artisans' Point, even with all of the incentives. “It looks good on paper...but that's more than what most small guys can afford,” he says. “I think it’s going to be harder than they expect.”

Spellman is aware of the concerns, and notes that some potential occupants of the development may also be worried about the effects and timeline of the Tincup construction, which is why Black Hawk has been slow to push its marketing efforts. Still, he says, “We think we are in a unique position. … There's nothing like this anywhere else that we are aware of.”

He also believes that Tincup’s estimate of 60,000 visitors per year is low. “We could easily double that," he concludes. "We haven’t proven it yet, but we are supremely confident."
KEEP WESTWORD FREE... Since we started Westword, it has been defined as the free, independent voice of Denver, and we'd like to keep it that way. With local media under siege, it's more important than ever for us to rally support behind funding our local journalism. You can help by participating in our "I Support" program, allowing us to keep offering readers access to our incisive coverage of local news, food and culture with no paywalls.
Make a one-time donation today for as little as $1.