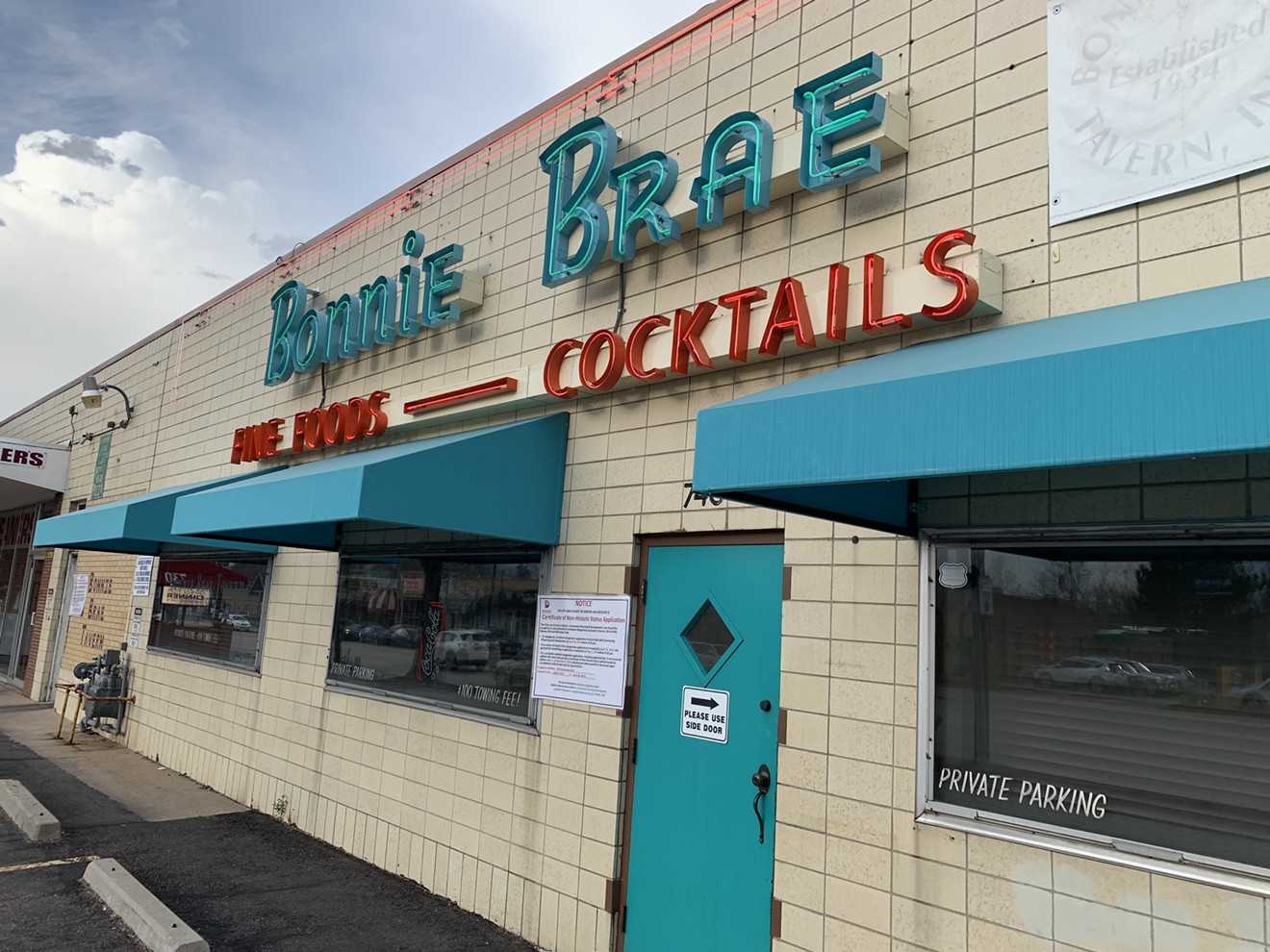 The Bonnie Brae Tavern in April...with the application for non-historic designation posted in front. Patricia Calhoun
The Bonnie Brae Tavern opened on June 6, 1934, which makes it one of the oldest continuously operating restaurants in Denver — and certainly the only one that's been in the same family for almost nine decades. But all that will end this month.

Carl and Susan Dire purchased the property in the 700 block of South University Boulevard, in the Bonnie Brae Annex subdivision, back in 1933, when the street was still a dirt road and the area was slowly transitioning from farmland to residential. They opened a gas station on a corner of the lot, then the next year added a small frame structure for a restaurant at 740 South University.

The Bonnie Brae Tavern was always a family affair; the Dires's son Michael joined the business in the 1940s, and their son Henry the next decade. By then, the Bonnie Brae had undergone a major remodel/renovation that kept some of the original building but replaced the A-frame roof with a dome and added an entirely new front — with a beige-and-turquoise color scheme that still rules outside and inside today. "Oh, God, this turquoise and brown...I learned to embrace it," admitted Mike Dire, a third-generation member of the family who started working at the Bonnie Brae forty years ago.

He told us that back in 2019, the year that the Bonnie Brae's facade suddenly sported something new: an application for a certificate of non-historic status that, if granted by the city, would allow the building to be demolished.

When the family-owned Dire Investments LLC filed that application, Dire told us, he didn't realize it would be posted on the restaurant. The blowback from some surprised neighbors was "horrible," he added. "I feel bad for my staff." Because as those staffers were bringing out the down-home diner-style food — pizza, Mexican, you name it — that regulars have craved for generations, they were being asked questions about whether the Bonnie Brae was for sale, or closing. Neither was the case at the time.

"We have no plans to do anything right now," Dire explained at the time. "It's just something we might need to do for the future." 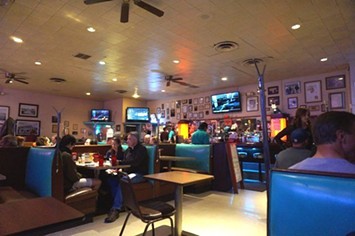 The restaurant sits on a prime piece of real estate (technically 734-740 South University, which includes both the space leased by a dry cleaner and the Bonnie Brae), at a time when the restaurant business is getting tougher and tougher, with more competition, increased challenges finding employees, and rising costs, particularly property taxes.

In the Landmark Preservation Commission review of the initial 2019 application, staffers noted that the building has kept its architectural integrity (that color scheme, much like everything else, looks unchanged from 1949), and also has ties to the history of the city. But the deadline to file a counter-application for historic designation (28 days after the initial posting) passed on April 30, 2019; since none was filed, the certificate of non-historic designation was issued.

That opened the door for the sale of the Bonnie Brae, and although there were several serious discussions over the ensuing years, no deal was consummated — until the end of May, when the Dire family sold the restaurant and nearby property for $4.5 million, according to BusinessDen. The buyers were Alpine Investments and Revesco Properties; the developers plan to put up a three-story apartment building.

And on June 25, Bonnie Brae will turn off the lights...and shut the door on almost nine decades of history.

While the Bonnie Brae Tavern is one of the oldest restaurants in the city, it's not the oldest.

El Chapultepec opened at 1962 Market Street right after Prohibition ended in December 1933, and the Cruise Room in the Oxford Hotel debuted at the same time. The Columbine Cafe opened that month at 15630 South Golden Road in Golden, when the area held nothing but the Coors Brewery and horse pastures. Although that neighborhood has changed considerably in the past 85 years, the Columbine is still pouring, even if the “cafe” portion of its name is limited to potluck events, the occasional fish fry and great breakfast burritos brought in on the weekends. (The saloon portion alone was enough to earn the Columbine our Best Dive Bar award in the Best of Denver 2019.)

Is there an older spot around town? Sam’s Coney Island opened in 1927 at 1500 Curtis Street; today it lives on as Sam’s No. 3, right across the street from its original home. The Buckhorn Exchange beats that; it’s been serving diners since 1893 under the same name and in the same building at 1000 Osage Street, and calls itself "Denver's oldest restaurant" on its website.

But while the Buckhorn boasts Colorado Liquor License No 1, that dates only to the end of Prohibition, when the state began issuing licenses. The address that’s been pouring longer than any other in town? That would be 2376 15th Street, home to My Brother’s Bar for fifty years...and to numerous other bars dating back to at least the early 1880s.

This story has been updated from the original published in April 2019.
KEEP WESTWORD FREE... Since we started Westword, it has been defined as the free, independent voice of Denver, and we'd like to keep it that way. With local media under siege, it's more important than ever for us to rally support behind funding our local journalism. You can help by participating in our "I Support" program, allowing us to keep offering readers access to our incisive coverage of local news, food and culture with no paywalls.
Make a one-time donation today for as little as $1.