Troy Reynolds prepares coffee for delivery to a local hospital. Brew Culture Coffee
Brew Culture Coffee, at 3620 West Colfax Avenue, closed to in-house customers on March 17, but owner Troy Reynolds still wanted to facilitate and support community — a value of many coffee shops and small businesses that has been tested by the coronavirus pandemic. Reynolds decided to start by supporting health-care workers on the front lines by providing them with free coffee.

Brew Culture is still open for takeout orders placed on the coffee shop's website, but with reduced hours, from 6:30 a.m. to 2 p.m. Monday through Friday. In addition to its regular busineess, the shop makes deliveries to the hospital twice daily, at 7 a.m. and 7 p.m. (even on the weekends, when Brew Culture is closed), because that is when the hospital's shift changes happen. "It doesn't just go to nurses and doctors; it's for anyone from the staff," says Reynolds, to "keep them going for a twelve-hour shift." 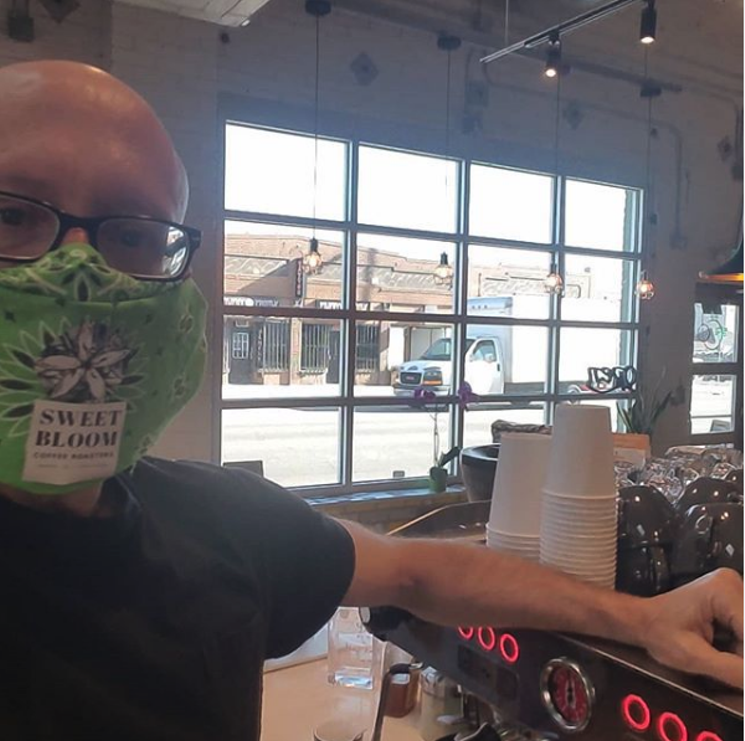 Troy Reynolds is masked up and ready to deliver coffee to a nearby hospital.
Brew Culture Coffee
Reynolds adds that instead of asking people to donate directly to the Brew Culture or to the baristas that he had to lay off as a result of the decline in business, he saw this as an opportunity to generate revenue for the coffee shop and provide a service to the community so he could rehire his staff once he can fully reopen.

"This way, it gives people a chance to give," the owner explains. "You are still donating...and someone is actually getting a cup of coffee, which is why we're open for business as a coffee shop anyway," Reynolds says.

Since April 1, Brew Culture has raised just over $1,000 — enough to make two deliveries per day, totaling more than 372 cups of coffee via bulk carafes (those handy cardboard boxes with plastic spouts). The cafe has also made several special deliveries to Denver Health.

Reynolds is currently keeping the coffee flowing by himself, taking and preparing orders, but he's had help delivering coffee to the hospital. "It's just me right now, so my wife and my landlord have gotten involved and helped deliver."

Those interested in donating can make a "purchase" from Brew Culture's new online ordering system and specify in the comments that they'd like the money to go toward hospital staff. "You can purchase anything that will go toward bulk coffee," he says, to make things simple. "Say someone wanted to give $4.25, the price of a latte; it would go toward a bulk coffee container. When it adds up to the bulk container price ($24), then we would go ahead and deliver that." He's also set up a display in the shop for people picking up to-go orders to give in person.

Reynolds plans to continue the program through April 30, when Denver's stay-at-home order is set to be lifted, but says that if the order is extended, he will try to continue the donations.
KEEP WESTWORD FREE... Since we started Westword, it has been defined as the free, independent voice of Denver, and we'd like to keep it that way. With local media under siege, it's more important than ever for us to rally support behind funding our local journalism. You can help by participating in our "I Support" program, allowing us to keep offering readers access to our incisive coverage of local news, food and culture with no paywalls.
Make a one-time donation today for as little as $1.