This Denver-Based Company Is Taking Over the Drinkware Scene

A tumbler in the Mountainscape pattern. BrüMate
When Dylan Jacob dropped out of college to tinker and make things on his own, his education-loving parents, whose weren't happy.  Eight years later, Jacob runs the multimillion-dollar company BrüMate, creating cups, tumblers, flasks, coolers and more with special technology that keeps things cold or hot, and leakproof. Now, he says, his parents are very proud of his expanding Denver-based company.

"The first batch of 1,000 sold out in the first day," says Jacob, who now makes and sells millions of BrüMate products across the world, straight from his RiNo office.

Originally from Indiana, Jacob moved to Denver in 2019 for the reason many young people do — he just loved it. At the time, BrüMate was just him selling his original creation, with contractors handling storage, shipping and logistics, all from Indiana. But Jacob wanted to grow, and the space he had carved for himself in his home state wasn't big enough. So, with the idea to expand the drinkware industry and start hiring staff, he packed up and came to Denver.
click to enlarge

"Colorado is the perfect mix of weather and nature, people are nice, and it's the perfect mix of what I like to do, but with a big city, too," Jacob says. Plus, he adds, with the craft beer and outdoor culture, it's a great market for selling lightweight, durable, portable and eco-friendly drinkware.

In addition to those useful aspects, BrüMate is fun and unique, too. Shoppers can pick colors and patterns based on mood or personal style. Need a little bling to go with that al fresco cocktail party? Try the Glitter Merlot MargTini or an Onyx Leopard Champagne Flute. Or maybe you want to get everyone in your family their own camping cup: With dozens of colors, it's easy to tell them apart. Beer lovers can keep suds cold without worrying about someone mistakenly swiping their can, and hikes get a little better with some refreshing white wine on the side.

Perhaps one of the most original aspects of BrüMate's design are the artist-driven models. The company just released its Mountainscapes Collection by local artist Alexia Barreiro, which features images of a moonrise and sunrise over the mountains. The company worked with the artist on its previous Botanicals Collection and has another collaboration in the works modeled after the celestial sky.
click to enlarge

Moonrise is one of the new patterns by a local artist that BrüMate offers.
BrüMate

The drinkware items work, too, and Jacob is always tweaking things to make them better. For example, the ReHydration Bottle has a flip spout to drink from, but that may soon change to a hands-free lid for ultimate ease. The company's BevLock™ Technology lid has changed over time, as well: Now it locks, is fully leakproof and has a magnetic closure that keeps the lid open while drinking.

This sort of innovation has been Jacob's mode of operation ever since he can remember. Even as a child, the now-27-year-old knew he wanted to be an inventor, and spent his whole childhood fulfilling that goal. In ninth grade, he worked at his grandfather's television repair shop. As more customers came in with broken iPads and iPhones, his grandfather didn't know what to do with them. So Jacob took over the modern-technology side of things and, thanks to YouTube tutorials, eventually grew that skill set into a business where he bought broken phones and tablets and repaired and resold them.

"When I thought of being an inventor, I never thought about being an entrepreneur. But over time, I started to merge the two ideas," says Jacob. Eventually, while still in high school, he found ways to get parts and started selling those to other repair shops, creating yet another business.
click to enlarge 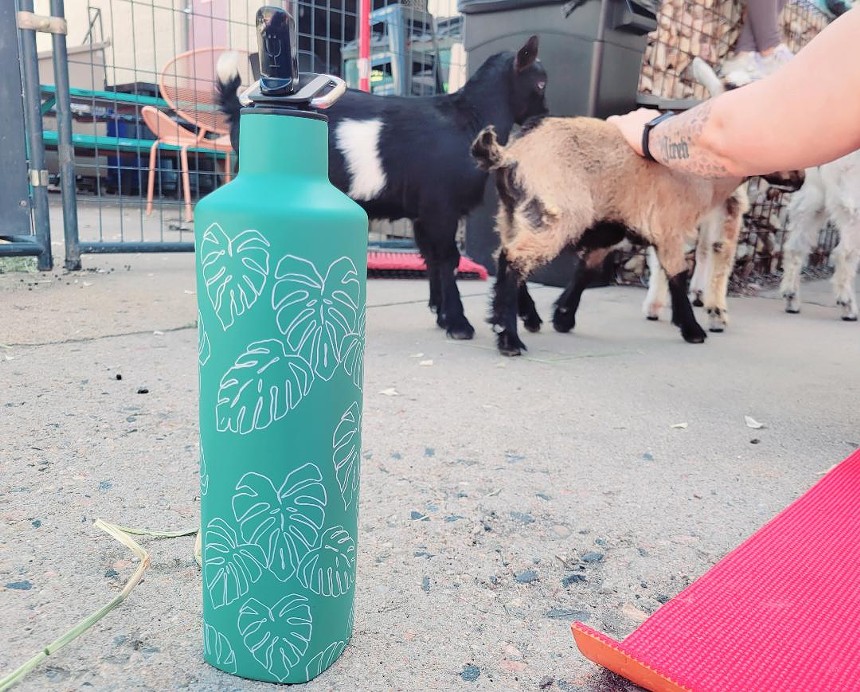 Despite his success from a young age, Jacob's parents really wanted their son to go to college — which he initially did with the intention of studying engineering. That lasted one semester. At the time, he was working full-time on his business and making over $100,000 in profits.

"I was eighteen and making more than any engineer I knew made," he says. So he left school, sold his company at the age of nineteen and decided to start making more tangible products. That's how BrüMate was born, though it didn't get that name until 2017.

The idea behind BrüMate came because Jacob was sick of his 16-ounce beers getting warm. So in 2016, he created what is now known as the Hopsulator TRíO, a three-in-one vessel that works to keep 16- or 12-ounce cans cool or can be used as a pint glass complete with a leakproof, locking lid.

To get that initial idea off the ground, all the marketing was done on social media and with basic guerrilla marketing. One of Jacob's first large-order customers was Sun King Brewing, an Indianapolis beer company he'd reached out to. In fact, it was Sun King's beer getting warm in his hands that inspired the Hopsulator and, later, the entire BrüMate business.
click to enlarge

The insulated, 25-ounce Winesulator came next — after Jacob got a ticket for having a bottle of wine at the beach.

The first year in business, Jacob did around $276,000 in sales. The next year, it was up to two million. Each year since, the company has grown — it's now in the six-digit category. Today BrüMate has dozens of employees, over 25 products and even more ideas in the works. It's the fastest-growing Colorado company on the Inc. 5000 list of independent businesses, and in 2018, Jacob made Forbes's 30 Under 30 list.

Not bad for a 27-year-old inventor from Indiana who didn't finish college. And, he adds, his mom now has her own collection of BrüMate products and never shies away from telling anyone that her son makes them.

BrüMate products can be ordered directly from its website and are available at stores like REI, Cabela's, Bass Pro Shops and Dick's Sporting Goods. For more information, visit brumate.com.
KEEP WESTWORD FREE... Since we started Westword, it has been defined as the free, independent voice of Denver, and we'd like to keep it that way. With local media under siege, it's more important than ever for us to rally support behind funding our local journalism. You can help by participating in our "I Support" program, allowing us to keep offering readers access to our incisive coverage of local news, food and culture with no paywalls.
Make a one-time donation today for as little as $1.