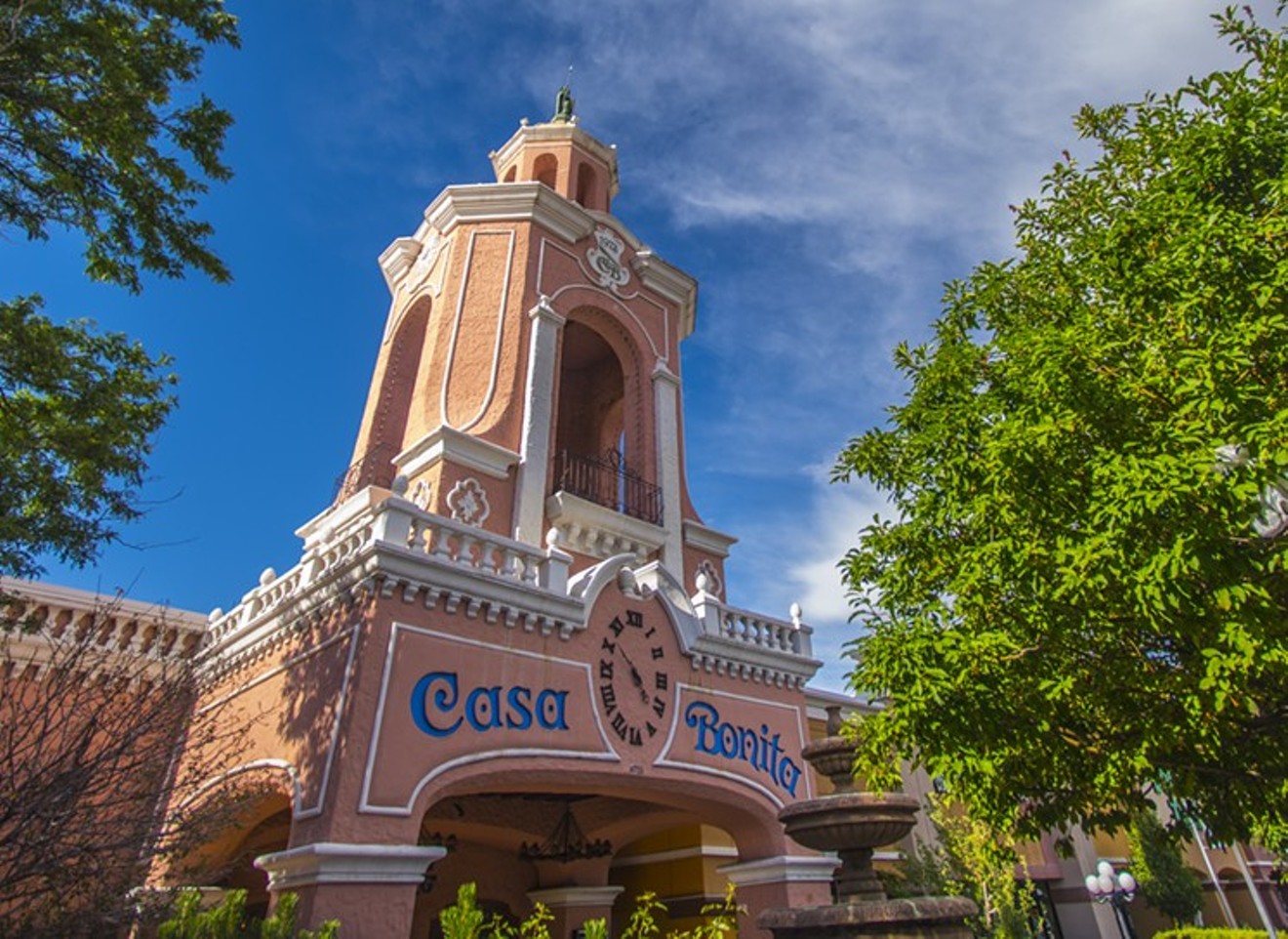 Casa Bonita has been closed since March 2020. Evan Semon
Casa Bonita, the still-closed eatertainment palace at 6715 West Colfax Avenue, isn't looking in the pink right now. Red might be a more appropriate description.

On April 6, Summit Family Restaurants Inc., doing business as Casa Bonita, filed for Chapter 11 bankruptcy protection in the U.S. Bankruptcy Court for the District of Arizona in Phoenix.

In the filing, Summit Family Restaurants estimates Casa Bonita's number of creditors at under fifty, and its liabilities in the category of between $1 and $10 million (specifically, $4.4 million); its assets fall in the same range, and are pegged at around $3.6 million. Since the restaurant hasn't been open in over a year, the biggest creditor is definitely the landlord, although the filing also lists outstanding payroll costs.

The filing buys Summit and owner Robert Wheaton some time to come up with cash — or at least a plan for its creditors — and "puts a stopper on the landlord actions," observes Andrew Novick, Casa Bonita's biggest fan.

It also buys time for Novick to keep pushing his efforts — including a Save Casa Bonita gofundme campaign — to show how much the community is behind this pop-culture landmark, in the hopes of finding some big-time investors who can help get the place into local hands.

"I think this actually helps us, because it keeps them from getting evicted," Novick notes. "And we surely don't want them to get evicted, because that would be the death of Casa Bonita."

While the bankruptcy filing will give the ownership time to reorganize the business, it will also provide more access to a group that's been notoriously tight-lipped through the pandemic. “I don’t expect a change in regulations until the vaccine is more broadly distributed,” owner Robert Wheaton finally told us in February, after closing the restaurant in March 2020. “The message to the community is that we expect to be back in operation by the beginning of the summer.”

In mid-March, just as Novick launched his gofundme page (it's collected slightly over $14,500 so far), the Casa Bonita web page, which had disappeared during the pandemic, came back to life, promising that the spot would be reopening soon and urging fans to watch for updates. So far, there have been no updates.

Casa Bonita was once a tiny chain of big restaurants; the first opened in Oklahoma City in 1968, and Bill Waugh built the Lakewood restaurant in 1974. In 1982 he sold all of his eateries to British food manufacturer Unigate, which passed the remaining establishments to CKE Restaurants in 1992. CKE spun off the last two survivors as part of Star Buffet, which today owns 21 other (considerably less high-concept) restaurants across the country, as well as this last Casa Bonita that today is technically owned by Summit Family Restaurant Inc.

That's just a bare-bones history of Casa Bonita, which has become the stuff of legends over the decades, the focus of many pop-culture references and more than one South Park episode. Those assets don't appear on any balance sheet, but they've helped make the place priceless to fans.

The creditors are slated for a meeting May 11 in Phoenix; there's a bankruptcy court hearing scheduled for June 5. In the meantime, Novick is strategizing his next play.

"We have some potential investors," he says. "If we could, we'd like to make an offer."

Interested in helping Novick's cause? You can reach him through savecasabonita.org. Or simply attend the Save Casa Bonita rally from 10 a.m. to 2 p.m. on Saturday, April 24 (postponed from April 17), on West Colfax outside the restaurant.

Summit Family Restaurants has not responded to requests for comment; you can read the filing here: