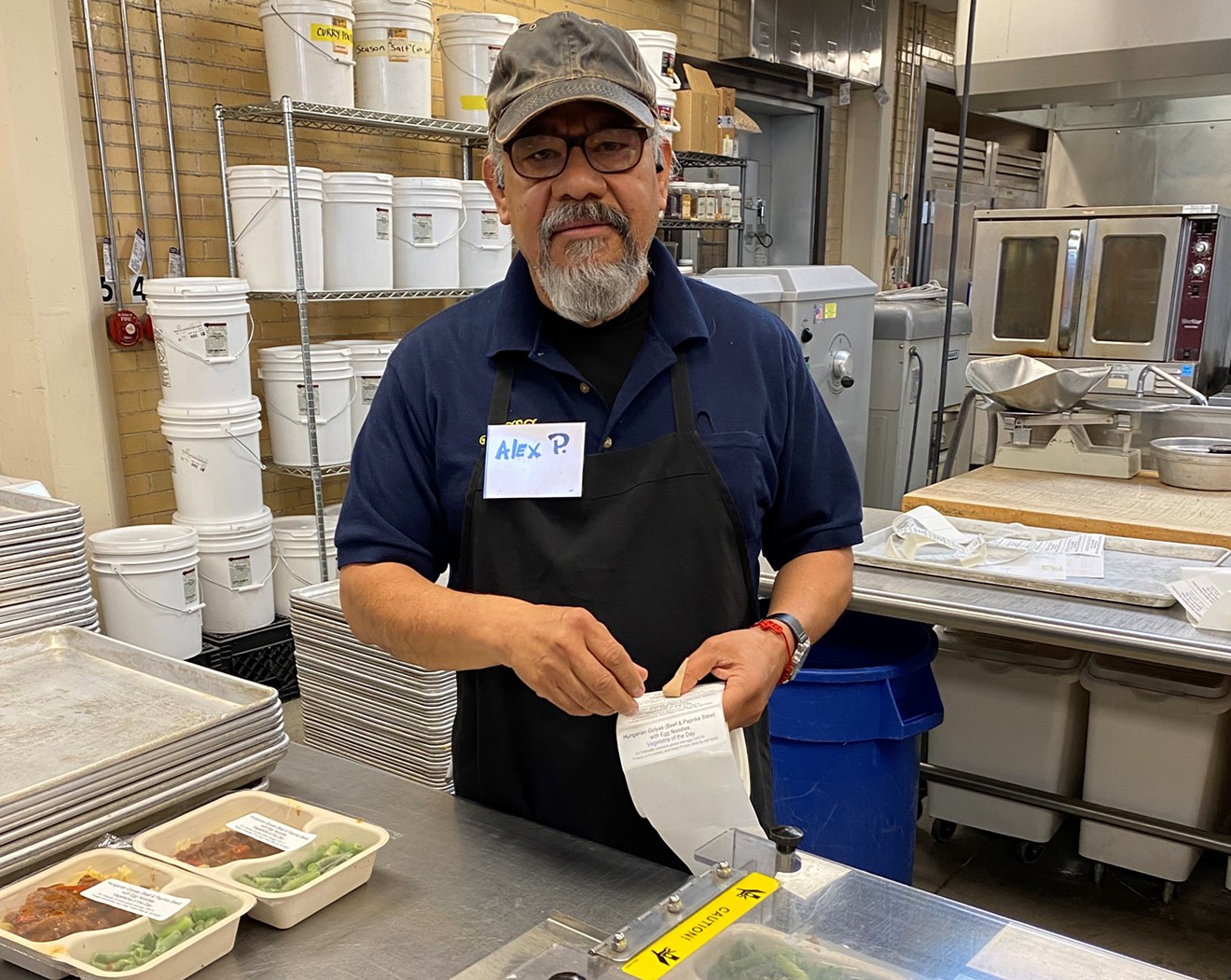 Alex Perez helps prep and package over 1,700 meals a week at Project Angel Heart. Project Angel Heart
The saga of Casa Bonita kept fans on their toes in 2021, as the future of the pink eatertainment palace that was immortalized in a 2003 South Park episode remained uncertain. Closed since March 2020, the iconic home of cliff divers, Black Bart's Cave and endless sopaipillas is still shuttered — but now a new beginning is on the horizon.

In August 2021, a swirling rumor was confirmed: South Park creators Trey Parker and Matt Stone, both Colorado natives, were purchasing Casa Bonita. When they reopen the place later this year, there are sure to be changes in store — including a new take on its famously not-so-great food from Dana Rodriguez, 2022 James Beard finalist for Best Chef, Mountain —  but there will also be some familiar faces.

Many longtime Casa Bonita staffers are planning to return. In order to keep those employees working, the new ownership offered them a unique opportunity while the facility is renovated: They were given the chance to be paid to volunteer at a number of nonprofits.

Alex Perez has been an employee at Casa Bonita since 1995. "I worked on the floor. Bartender, server, supervisor. I know everything about Casa Bonita," he says. "It’s the best place in the world. It’s a restaurant. It’s entertainment. Every day, you see different faces. Lots of families. Lots of kids. People from all over the world. It’s amazing."

Before Parker and Stone purchased Casa Bonita, Perez was, like so many others, staying home and taking care of his family. But when the volunteer opportunity came up, he was happy to jump on board and joined the team at Project Angel Heart, a Denver-based nonprofit that provides medically tailored meals to those facing illness. "After Casa Bonita, [Project Angel Heart] is the best experience that I could have," Perez explains. "To be part of providing meals, especially for people who are sick, and some who wouldn’t have food, is incredible. And the supervisors are great. The people here are great people. All the volunteers are wonderful." 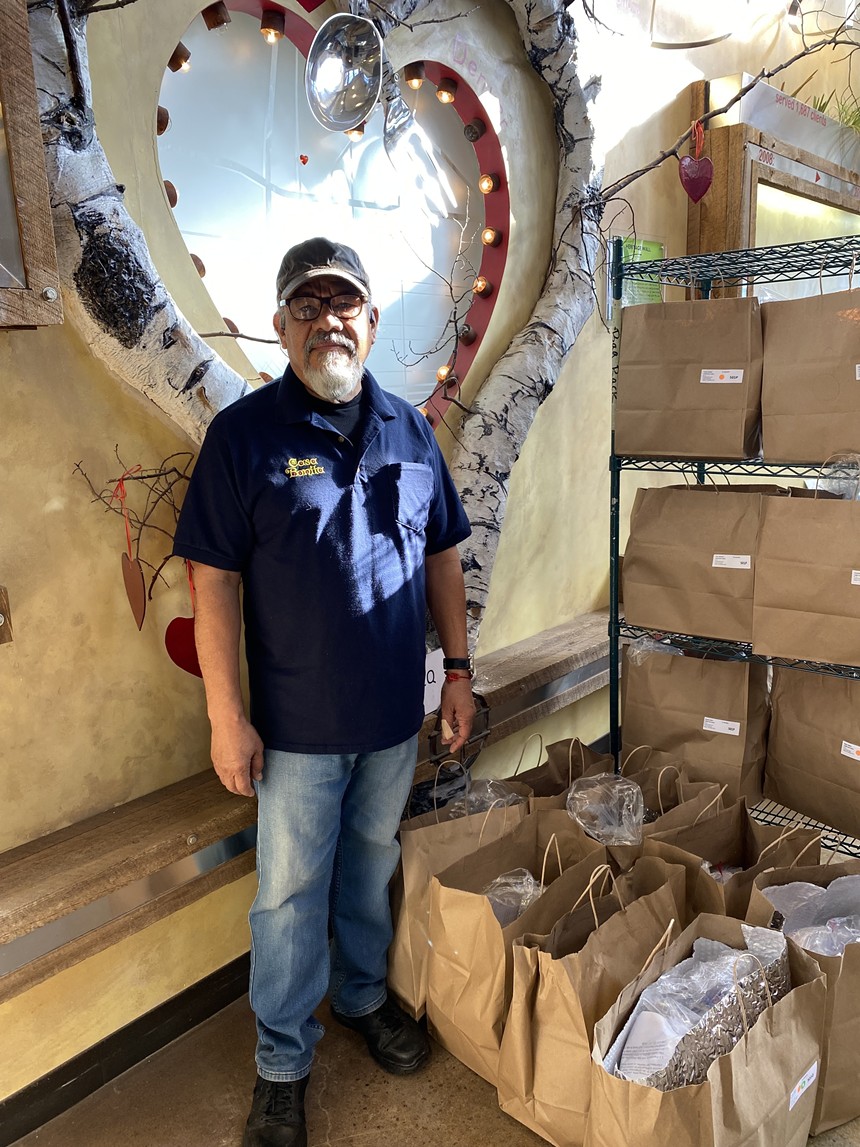 Project Angel Heart celebrated its thirtieth anniversary in 2021 and recently expanded its services to Boulder, Weld County and Pueblo. "It almost feels like it happened overnight," Newman says of the increase in production. "We used to serve around 1,500 clients a week. Now it's 1,740, and it could be upwards of 1,900 soon."

Serving that many people requires a lot of extra help, 75 percent of which is done by more than twenty volunteers a day. Perez, who comes in three days a week, has been able to help lead those volunteers while also taking on many other essential tasks. "I keep very busy," he says. "I help with prep, chopping fresh vegetables like onions, red peppers and celery. I prep and season protein like tilapia and salmon. I help with dish-up, which is preparing the individual meal trays that get delivered. I help with dishes. I also help in distribution if needed. I’m all over the kitchen — whatever they need!"

And he does all of that with a positive attitude every day. "He's nothing but smiles," Newman says. "That really rubs off on our other staff and the volunteers. We can give him 500 pounds of potatoes to peel, and he'll just knock it out with nothing but smiles and jokes the whole time."

But while Perez has loved his time at Project Angel Heart, he — like a lot of people in Denver — can't wait to return to Casa Bonita. "I’m excited to get inside and see what has been happening," he says. "I expect to walk in and say, 'Wow!'"
KEEP WESTWORD FREE... Since we started Westword, it has been defined as the free, independent voice of Denver, and we'd like to keep it that way. With local media under siege, it's more important than ever for us to rally support behind funding our local journalism. You can help by participating in our "I Support" program, allowing us to keep offering readers access to our incisive coverage of local news, food and culture with no paywalls.
Make a one-time donation today for as little as $1.