You Can't Go to Casa Bonita, but Its Employees Could Be Coming to You

The South Park creators immortalized Casa Bonita in a 2003 episode...and now own it. South Park
South Park, the long-running satirical cartoon on Comedy Central, might be known for its potty-mouthed protagonists — schoolkids in a fictional town of Colorado who are big fans of Casa Bonita — but there's a sweetness at its heart.

Now that the bankruptcy judge has signed off on the sale of Casa Bonita to South Park creators and Colorado natives Trey Parker and Matt Stone for $3.1 million (and an unknown amount for intellectual property rights), some of their plans are going public. And they look not only smart, but kind of sweet, too.

On November 16, the team announced that restaurateur Dana Rodriguez has signed on as executive chef and culinary partner. The popular and generous Denver chef — whose life story would make a script of its own — has already been in the kitchen, analyzing the equipment updates needed at the pink entertainment palace that opened at 6715 West Colfax Avenue in Lakewood back in 1974.

Robert Wheaton, who bought Casa Bonita from founder Bill Waugh, had closed the restaurant in March 2020 as the pandemic hit; the dining area never reopened. Earlier this year, even as Wheaton's Summit Family Restaurants filed for bankruptcy protection in April, Casa Bonita began offering free tours of the empty restaurant. 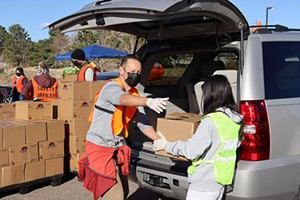 The Lakewood Action Center will be distributing Thanksgiving meal kits on November 20.
Action Center
Those tours stopped as the sale was finalized, and the South Park crew got busy. But the employees who'd been overseeing Casa Bonita during the quiet pandemic months and leading the tours aren't out in the cold. In a move as smart as the hiring of Rodriguez (but far quieter), Stone, Parker and company are keeping fifty-plus current Casa Bonita team members employed until the restaurant reopens, probably sometime next summer.

But these employees won't be working at the building itself: Instead, Casa Bonita spokeswoman Stef Jones confirms, they've been asked to provide their time and energy to local community nonprofits including We Don't Waste, Project Angel Heart, the Action Center and Habitat ReStores in Denver and Wheat Ridge. At a time when many charitable organizations are short of both help and cash, this move has been very welcome, says one Lakewood official.

Sweet.
KEEP WESTWORD FREE... Since we started Westword, it has been defined as the free, independent voice of Denver, and we'd like to keep it that way. With local media under siege, it's more important than ever for us to rally support behind funding our local journalism. You can help by participating in our "I Support" program, allowing us to keep offering readers access to our incisive coverage of local news, food and culture with no paywalls.
Make a one-time donation today for as little as $1.