Chef Ian Kleinman oversees the final push to open the Inventing Room at its new West Highland address. Mark Antonation
Ian Kleinman keeps reinventing himself. While he’s still disappointed that he had to close the Inventing Room, his modernist dessert bar at 2020 Lawrence Street, a year ago, he was determined to use the bad break as a springboard to better things. Rather than simply focus on an already successful catering business and a handful of overseas Inventing Room franchises, Kleinman gave himself a month or two to reflect and figure out what he’d learned from the experience.

And then he began his search for a spot for a new, improved Inventing Room, one with a better location and fewer complications. Although the original had delighted Denverites with its fanciful confections and liquid-nitrogen ice cream, after a year the landlord nullified a sublease tied to the restaurant space next door (which had gone dark after Stephen Kleinman, Ian’s dad, closed the short-lived Pop’s Place; before that, it had held the brilliant but also doomed Lower48 Kitchen). Kleinman recalls that the primary pedestrian traffic in the neighborhood came from the homeless community; when he a hosted a Halloween ice cream giveaway to anyone showing up in a costume, the long line that formed was mainly street people claiming to be in homeless-guy costumes, but he happily gave away ice cream to all, costumed or not. 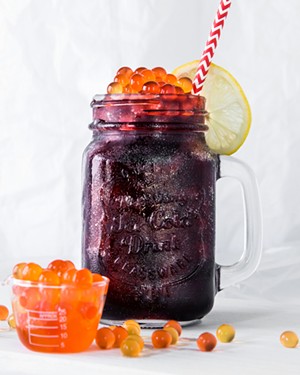 Kleinman was methodical in his hunt for a new home, keeping a wary eye on the breakneck pace of restaurant growth as first-timers snatched up overpriced properties with unfavorable lease clauses that allowed property owners to tap into their gross profits. He knew that, to a certain extent, his customers were destination dessert-seekers, willing to drive to the Inventing Room regardless of its location. But he also wanted a place where neighbors could walk in, a place that would be exciting for families with kids. He found it in West Highland, in a new mixed-use building across the street from a strip that already housed a coffee shop, bagel joint and craft brewery.

Dubbed SloHi Station, since it was in Highland near Sloan’s Lake, the building had just what Kleinman was looking for: a modern setting with a blank slate, and a combination of residential and retail neighbors who might support the business year-round. Although the interior is an odd shape — a kind of zigzagged rectangle, like a Tetris piece — that enabled him to devote separate spots to the dessert bar, seating area and special events (such as his Gobblefunk chef’s dinners). And the space also came with an outdoor patio, something that he didn’t have at the original shop.

After Kleinman signed the lease in May, he and his wife, Stacey, went to work creating version 2.0 of the Inventing Room, laying tile, building sculptural pieces for the walls and overseeing more complicated projects done by contractors, such as the ductwork that had to be redone because the first try blocked out too much of the space that would soon display their found-object art. Many of the pieces were from the original Inventing Room, but Kleinman also found new light sconces on Etsy and ordered other items from as far away as Poland. The dessert bar will look familiar to customers of the Inventing Room, but there are plenty of new surprising awaiting.
Mark Antonation
An entire wall near the front windows became the backdrop for a portrait of Gene Wilder. “We wanted to acknowledge Willie Wonka without being too obvious, so this is Gene Wilder as himself,” Kleinman explains.

Another wall holds the vertical marble maze that Kleinman built in his garage from copper tubing salvaged from the first Inventing Room. One of his neighbors left midway into this project; Kleinman speculates that all of his swearing and the sound of marbles hitting concrete as the track was tested over and over after each weld (he still has the chipped marbles as proof) prompted the move. A vacuum pump sucks the marbles back up to the top of the track; the maze will soon be equipped with a Bluetooth power switch so that it can be turned on and off remotely. Around the corner, there’s a “Red Carpet” station where social-media addicts can photograph their desserts on a lit platform with the requisite Inventing Room logos and an actual red carpet in the background. Gene Wilder presides over the ice cream parlor.
Mark Antonation
Many of the desserts that first drew customers to the Inventing Room — the fun-flavored cotton candies, flash-frozen mousses and exploding whipped creams — will be back, but the chef is adding to his repertoire because inventing is what he does. Kleinman’s been experimenting with tempering chocolate, so don’t be surprised to see airy squiggles that resemble miniature funnel cakes made of glossy chocolate top-ping your dessert. Moving beyond liquid nitrogen, he’s been playing with silicone molds to make edible objects from hard candy and is also installing a tumbler to create bite-sized candies similar to what you might find at a movie-theater concession counter — but with flavors that only Kleinman could dream up.

While Kleinman is first and foremost a chef, he realizes that he’s an entertainer, too. “It’s all about the experience for me now,” he explains. Desserts must be “something we can make in front of the customer.” So while some preparations will happen behind the scenes, the creations will be built, frozen and otherwise assembled to order for each customer. Kleinman also wants to use his style of cooking as an educational tool for kids (and adults, too); his roving “Science Station,” for example, might include geodes studded with milky quartz crystals alongside hardened volcanic rock, speckled with tiny sparkling jewels. He uses these rocks to explain how crystals grow bigger when they’re allowed more time to do so, which is why ice cream frozen in a flash in liquid nitrogen is so much smoother and creamier than traditional ice cream. Kids will also get to see clouds form instantly over liquid nitrogen and truffles hovering on nitrogen-chilled superconductor magnets (even grownups are amazed at this practical demonstration of quantum physics).

“My whole goal is to get people thinking about other things while they walk through the line,” he explains.
The life of an inventor isn’t easy; being ahead of your time means struggling with a lack of recognition, as Kleinman did at O’s Steak & Sea-food inside the Westin Westminster, where hotel guests and locals just weren’t ready for things like balsamic foam or gazpacho spheres. (Today that space is home to Kachina Southwestern Grill.) But running a hotel restaurant taught Kleinman about multi-tasking and taking change in stride, lessons that prepared him for his current life, where he’s juggling the opening of his new dessert bar with negotiating franchises in Qatar and Bahrain and catering big events, including an upcoming Von Miller charity dinner.

“Come with me and you’ll be/In a world of pure imagination,” sang Gene Wilder in the weird and wonderful Willie Wonka and the Chocolate Factory. Just as Wonka’s guests experienced both dread and wonderment on their tour of his factory, Kleinman has gone through plenty of ups and downs in his career. But the result is now an equally weird and wonderful (minus the creepy Oompa Loompas) experience that’s part ice cream parlor and part magic show — courtesy of Denver’s top conjurer of confections.

The Inventing Room will open on Sunday, October 29, at 4431 West 29th Avenue. It will be open from noon to 10 p.m. Tuesday through Sunday; find out more at inventing-room.com.