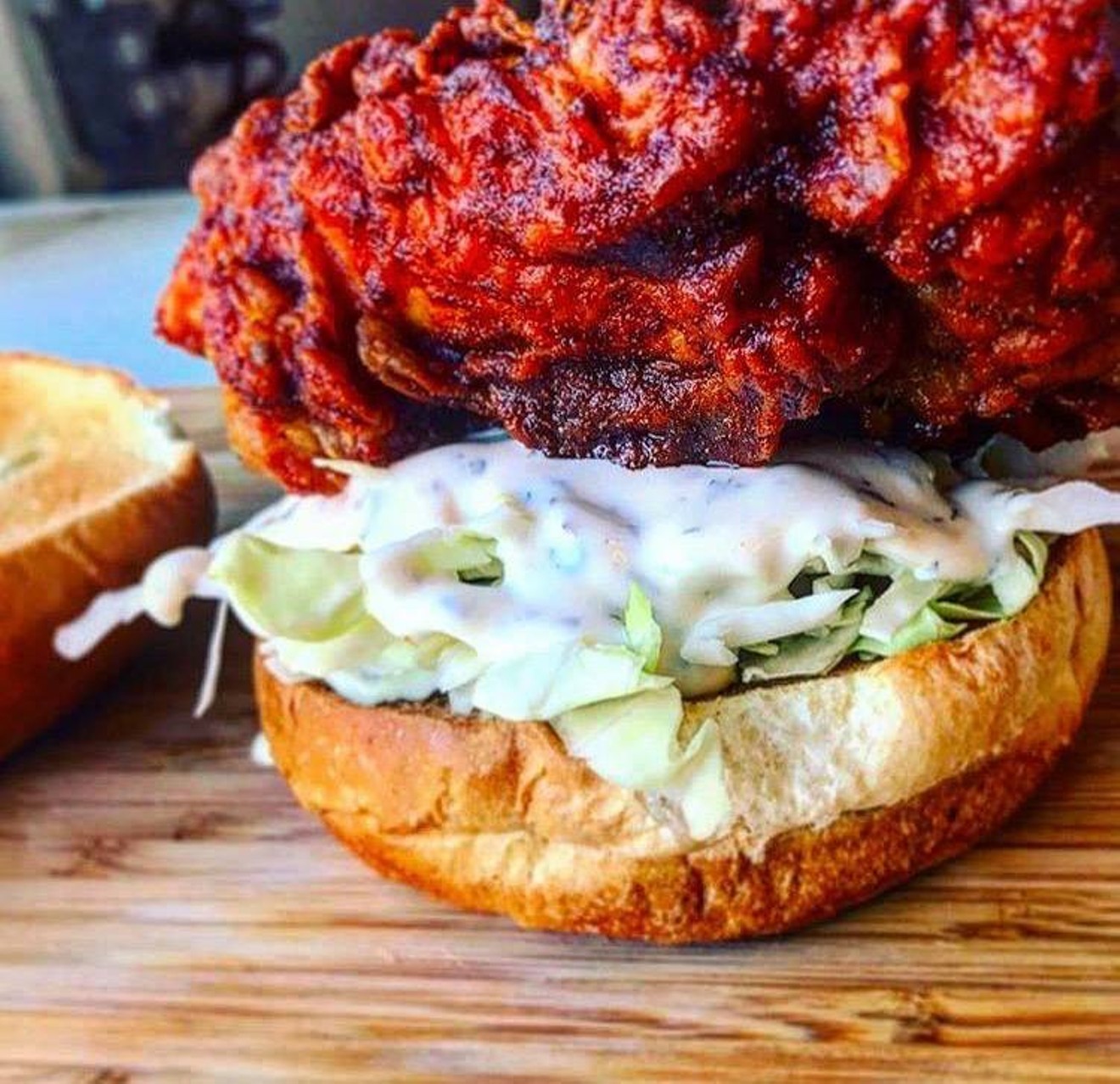 The Fiery Bird has sold so well in Denver that it helped convince Chicken Rebel to stay in town. Courtesy of Lydie Lovett
San Diego fried-chicken expert Lydie Lovett needed a change of scenery, so she brought her street-food stand, Chicken Rebel, to Denver in July for a month just to test this city's chicken-sandwich market. Lovett has been so overwhelmed by the positive response from customers that she has already taken steps to make things more permanent. After purchasing a food truck to replace her cumbersome stand, she's now set up at Finn's Manor, 2927 Larimer Street, serving sandwiches and loaded tots every Wednesday through Sunday.

"We really kind of fell in love with the city," Lovett says, "and we've sold out every gig so far."

All of the food trucks currently serving at Finn's are owned by women, she notes, and Lovett has been sharing tips with them and learning about Denver's mobile-food scene while slowly introducing new items. Since coming to Denver, she's noticed regional differences in her customers' tastes, so she's making sure that her offerings are dialed in to her new audience. For example, the Nashville-style Fiery Bird sandwich is her best seller here, while she took it off the menu in San Diego because nobody wanted it. "We'll have two new sandwiches on the menu, and we'll let customers pick the winner," Lovett says.

Finn's Manor is just the beginning of big things for Chicken Rebel. "I really think it's a launching pad for a permanent physical location," Lovett explains. The chef just got back from a week of meetings in San Diego to nail down a brick-and-mortar there, and she hopes to have a lease signed somewhere in Denver this fall so that she can continue serving sandwiches here throughout the year.

Part of the secret to Chicken Rebel's appeal is that the chicken breasts are cooked sous-vide (vacuum sealed and poached at low temperature) before being hand-dipped in beer batter and fried to order. But having a full food truck with griddles and more room for deep fryers means that Lovett has been able to increase production as well as experiment with other menu options. She's looking at introducing Mexican-style carne asada "totchos" and this week will be serving a chicken sandwich with bourbon-maple-bacon jam and pimento cheese.

If you're not a meat eater, Chicken Rebel has something for you, too. "Vegetarians flock to us," Lovett says, because of the housemade vegan patty dipped and fried in the same beer batter that coats the chicken. Most of the tot offerings are also meatless.

While snow birds usually migrate from Colorado to a warmer climate come winter, this San Diego chicken is ready to roost here for good.