Cohesion Brewing Opens, Offering a Special Kind of Foam on the Range

Just try it: Cohesion's dark lager poured in the mlíko way. Sarah Cowell
Pouring foam is an art form in the Czech Republic. In Denver, it's a rare and pillowy pleasure.

But Czech beer-drinking traditions like foam will be front and center when Cohesion Brewing opens to the public on August 6 at 3851 Steele Street Unit 1388 in a business park that's being developed into York Street Yards. Cohesion will have three lagers on tap and three ways to order each one: hladinka (a normal pour), šnyt (which is about half foam) and mlíko (a nearly full glass of sweet, creamy head that feels almost like drinking a latte).

Czech beer nomenclature takes some getting used to.
Sarah Cowell
"[The pour] is what makes the beer," says Eric Larkin, who owns Cohesion with his wife, Lisa. "It's such a huge part of the Czech beer culture and atmosphere — they have contests over there to see who can do it better, faster or more efficiently — that we wanted to highlight it here. That's why the taps are up front."

Cohesion's tapsters have been practicing their pours.
Sarah Cowell
With its Lukr side-pouring faucet taps, elegant tile-and-chandelier decor, high ceilings and European-style wooden booths, Cohesion takes its place as the city's newest craft brewery. But behind the scenes, Larkin is a fan of doing things the old way, which is why he puts just as much meticulous detail into the brewing process as he does pouring. 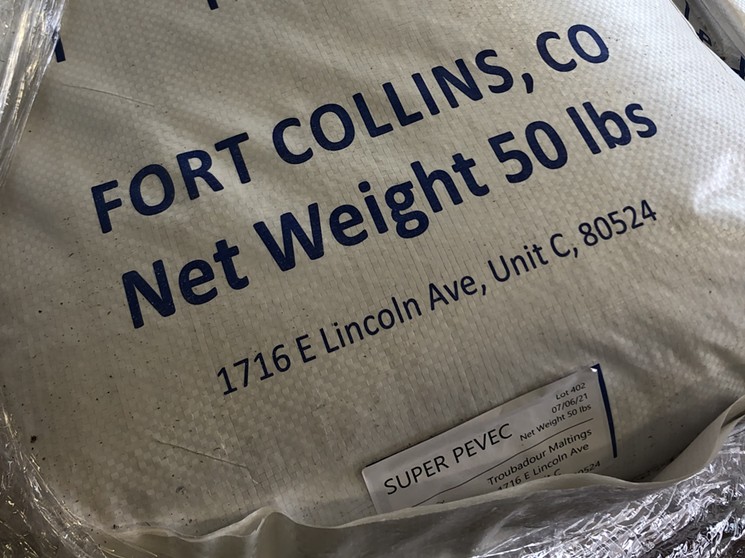 Cohesion uses custom-malted barley from Troubador Maltings.
Sarah Cowell
In addition to buying all of his malt — including some that will be roasted to his exact specifications — from Loveland’s Troubadour Maltings, Larkin will use only whole-cone hops as opposed to hop pellets, which are the norm at most breweries. He’ll also rely on a three-stage, reverse-osmosis water filtration system and a traditional open-topped fermenter that will be protected from intrusive bacteria by a high-efficiency air purifier.

Sarah Cowell
The brewhouse itself is made for decoction mashing — a time-consuming technique that calls for separating a portion of the mash at least once during brewing, then boiling it at an even higher temperature in order to extract more flavor before adding it back in to the mix. Most American breweries aren't set up for decoction mashing because they either don't have the right equipment or don't have the time or staffing required.

Sarah Cowell
But it's up in the front of the house where Larkin wants to make the biggest impression. The opening beers are a pale lager (this one was brewed at a specific gravity of ten degrees, which equates to just under 4 percent ABV) and a fudgy dark lager, or tmavý, that comes in at 5.1 percent ABV. There is also an even lighter pale lager brewed in collaboration with Wild Provisions Beer Project in Boulder, along with guest beers from breweries that Larkin likes and in styles that he doesn't plan to brew, including IPAs, saisons and sours.

Sarah Cowell
To get the foam right, the staff — tapsters, actually — have been practicing, pouring dozens of mugs before opening in order to work out the kinks. Another detail added by Larkin: The mugs are kept wet and chilled to the same temperature as the beer, as they are in some Czech bars.

Sarah Cowell
Despite the attention to detail, however, the brewery has a relaxed atmosphere, set in the large but refurbished business park just off East 39th Avenue and York Street in the Clayton neighborhood that was once a WWII-era U.S. Army medical depot designed by renowned architect Temple Hoyne Buell. There is a patio out front with umbrellas, and there will be food trucks August 6 and 7 for the grand-opening weekend.

Cohesion Brewing is located at 3851 Steele Street Unit 1388 and is open 2 to 10 p.m. Tuesday through Thursday, noon to 10 p.m. Friday and Saturday and noon to 8 p.m. Sunday. For more information, visit cohesionbeer.com.
KEEP WESTWORD FREE... Since we started Westword, it has been defined as the free, independent voice of Denver, and we'd like to keep it that way. With local media under siege, it's more important than ever for us to rally support behind funding our local journalism. You can help by participating in our "I Support" program, allowing us to keep offering readers access to our incisive coverage of local news, food and culture with no paywalls.
Make a one-time donation today for as little as $1.