The new owner of the 5,500-square-foot brewpub is Matthew Dettmann, a Colorado Springs restaurateur, real estate investor and home brewer who plans to keep the Trinity name and many of the beers created by Yester, including groundbreaking saisons, wild ales, IPAs and sours.

One of those beers, TPS Report, put Yester on the national radar when it won gold at the Great American Beer Festival in 2009. The brewer created the distinctive beer by fermenting it entirely with “wild” Brettanomyces yeast, adding lemon and tangerine zest and aging it in French oak chardonnay barrels. The result was an earthy, elegant, complex beer that was like nothing most people had tasted before. The beer inspired a whole generation of brewers who came to prominence in the ensuing years, and 100 percent Brett beers are now much more common in the U.S.

Like his beers, however, Yester’s personality and opinions are complex. As a result, he has been somewhat of a lightning rod for controversy inside the sometimes insular world of craft beer, never shying away from any topic, whether it was music, the Denver Broncos, the residents of Colorado Springs and organic gardening, or hazy IPAs, modern brewing trends, the obsolete pint glass or rival sour-beer specialists. 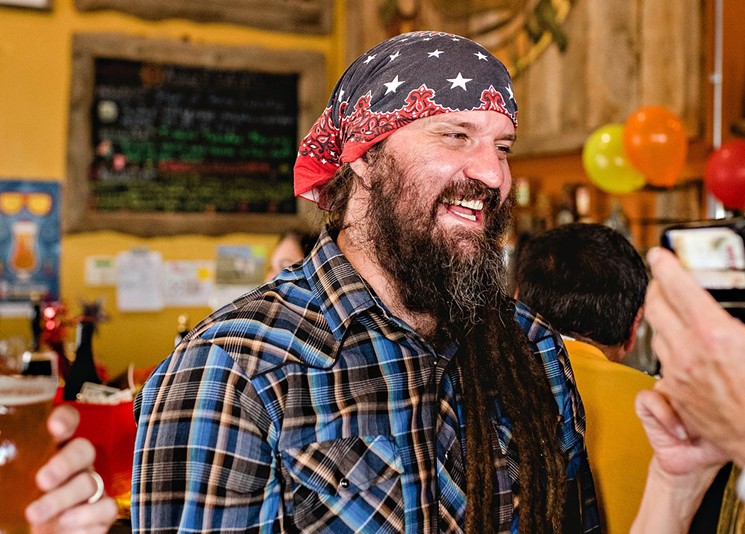 Jason "Saison Man" Yester is known for his dreadlocks, his bandana and his unusual brewing style.
Trinity Brewing
He has done battle online and in person with beer writers, with customers and with other brewers, sometimes with well-thought-out arguments and other times by spitting angrily into social media. It's no surprise, then, that he is exiting in the industry over a matter of principle. “I think American beer has hit its pinnacle. I don't think it is going to improve. In fact, over the last two years, seeing it get worse was really difficult for me,” he explains. “Craft beer was a movement… It was a special time that happened. But when the hazy IPA thing hit, everything seemed to change, and not in a direction that inspired me.”

Yester is talking mostly about the prevalence of hazy, New England-style IPAs, which exploded onto the beer scene in 2016 and have since taken over the conversation — and the taplines — in most breweries. But he is also frustrated by the growing popularity of puréed fruit beers and pastry — or “dessert” — stouts.

So much so that their existence has convinced him to step away. “I just don’t connect with the industry anymore,” he says about the hazy IPA trend. “It is really hard being in the industry for 24 years, an industry that was so diverse, and is now so homogenous [when it comes to beer styles]. I don’t feel like there is a lot of creativity behind it.”

A Colorado native, Yester — who is known for his dreadlocks, bandana and beard, along with his alter-ego, "Saison Man" — took a job at Bristol Brewing when he was only eighteen and started brewing shortly thereafter. He stayed on at Bristol after earning his degree in microbiology at Colorado College and continued to brew there until 2008, when he opened Trinity. Jason Yester, center, on stage after winning a medal for Red Swingline at GABF.
Brewers Association
With a passion for wild yeast and other microbes (he wrote a 100-page thesis on the topic), he quickly began brewing traditional European-style farmhouse saisons and experimenting with yeast and bacteria. Many of his beers' names were references to the movie Office Space and other popular-culture signposts. The labels were often drawn by Yester himself and then finished out by artist friends. He also incorporated seasonal ingredients and earthy flavors into his beers.

As a thoroughly American brewer, though, Yester loved hops, which explains the genesis of the award-winning Red Swingline, a barrel-aged sour IPA. Named one of the best beers of the year in 2013 by Draft magazine, the low-ABV beer was funky and brewed with spices more reminiscent of a saison than an IPA. But a big hop wallop left no doubt about its ambitions as an American IPA. Like TPS Report before it, the beer turned heads and inspired other breweries, both in Colorado and across the country, to go after a similar flavor profile.

“Our defining beer was Red Swingline,” Yester says. “But this brewery changed the landscape, period. No question about it. Not only with sour and wild beer,and having the courage to brew them, but from the farmhouse and harvest side of it. No one had put the flavors into beers that we did. We opened a lot of doors and brought a lot of ideas to the table. We were sort of a springboard for increasing the diversity of American beer.”

More recently, though, Yester became more and more frustrated with hazy IPAs and the seemingly endless ways that popular breweries tweak them simply by changing the hops. He spoke out against them frequently, sometimes belligerently, on social media, roasting everything from the colors on the cans to the hype that surrounds them. An example: “I think I will make three beers called Puree Party, Soulless and Cheap Trick," he wrote at one point in 2018. "Fuck this shit, it’s literally destroying everything I spent the last twenty years working for. Fuck lactose, fuck identical recipe new purple label hazies, and fuck primary colors. Fuck anyone who supports that shit.”

Hype Forager was Trinity's foray into hazy IPAs.
Trinity Brewing
Due to the popularity of the style, though, Yester eventually acquiesced to making his own hazy IPA — but not without some skewering satire. Hype Forager, part of the "Back Up the Brinkmann” series, featured an upside-down label, primary colors and other messages.

But that decision also signaled the end of the road for Yester, who began looking for a buyer for the brewpub in 2018. Now that he has sold it, Yester says he has another project in the works, although it is not beer-related. He is also looking forward to seeing how Dettmann changes the restaurant side of the business “He is really experienced on that side of it,” Yester says. "He will bring a better structure to the restaurant than I was able to give.”

It's possible that Yester could return to brewing at some point, but only with a small brewery where he could brew in the morning and bartend at night — similar, he says, to what his friend, sour-beer pioneer and former New Belgium brewmaster Peter Bouckaert, is doing in Fort Collins with Purpose Brewing.

“It would have to be a lifestyle brewery,” Yester says, adding that Bouckaert is the only other brewer with whom he discussed the sale of Trinity. “Peter understands. He understands why I am frustrated.”
KEEP WESTWORD FREE... Since we started Westword, it has been defined as the free, independent voice of Denver, and we'd like to keep it that way. With local media under siege, it's more important than ever for us to rally support behind funding our local journalism. You can help by participating in our "I Support" program, allowing us to keep offering readers access to our incisive coverage of local news, food and culture with no paywalls.
Make a one-time donation today for as little as $1.